Salamanca, Via de la Plata Camino, is one of Spain’s most intriguing cities. With a history as elaborate as the artwork on the facades of its buildings, a walk through Salamanca is a labyrinth through the ages. The city serves up a wholesome stew of Romanesque, Gothic, Moorish, Renaissance and Baroque architecture. 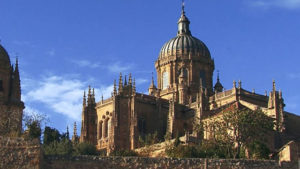 Home to Spain’s oldest University, thousands of students make the city theirs each year, bringing with them infectious vibrant energy. By day, the streets are peaceful and contemplative. With sprawling plazas full of all manner of pundits selling their wares. Painters and street musicians wrestle for attention while dreadlocked hippies auction handmade silverware. But once darkness falls over these medieval streets, buildings become illuminated by floodlights and the students emerge from the cracks in the stonework to begin their nocturnal existence. Spain is infamous for its all-night partying and Salamanca is absolutely no exception. An incubator for all things exuberant and artistic, Salamanca is made for living and breathing, history and art. 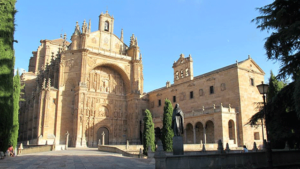 Founded in the 15th Century, the crafted façade of the Salamanca University is a stunning example of the intricate design that adorns so much of the city’s architecture. In a quintessential Salamanca blending of the modern with the bygone, the building is home to two rather unexpected characters; an astronaut and a frog. How they got there is subject to numerous myths and legends but it is likely that they were planted here during building restoration work.
The city is so synonymous with University life that it even has its own University New Year’s celebrations which take place each year on the second-last Thursday of December. 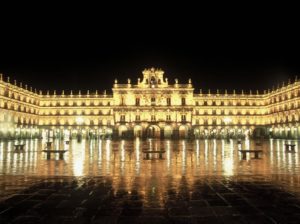 This gives students the opportunity to celebrate the last night of the year with their friends before returning home for the Christmas period. The main event of the night involves the Spanish tradition of eating 12 grapes in the seconds counting to midnight. If successfully swallowed before the clock strikes twelve, these are believed to bring good luck for the coming year. The countdown takes place in the city’s beautiful Baroque Plaza Mayor with a mass congregation of students chanting in unison before dispersing into the city’s many bars and clubs to dance the night away.

To feel the full throng of Salamanca the city is best experienced by day and night. A visit to its majestic Cathedral gleans spectacular views of the city and is the perfect place to watch its transformation from night today.

For more information on Salamanca on the Via de la Plata or to hear more about the Camino de Santiago routes, contact out travel specialists.