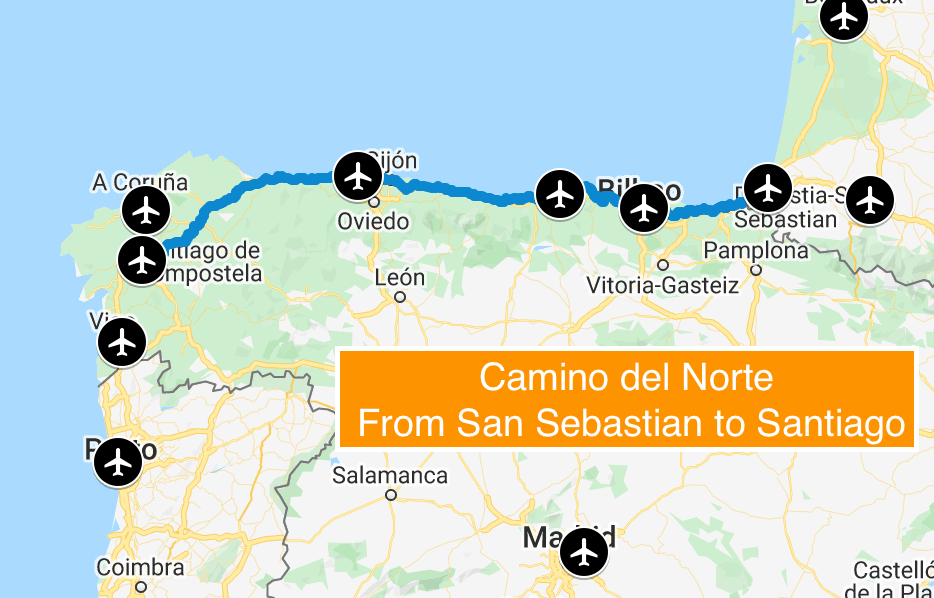 The Camino del Norte or Northern Way is the Camino de Santiago route taking pilgrims along the wonderful Northern coast of ‘Green Spain’ from the Basque Country, across Cantabria, Asturias, and on to Santiago de Compostela, in Galicia. Along this coastal Camino, you will discover fascinating cities and fishing villages, swim in beautiful sandy beaches, and taste delicious seafood.

You can start your Camino del Norte journey from the town of Irun or the chic seaside city of San Sebastián (Donosti in Basque) which is a real paradise for foodies: it is in fact in the top 10 cities with the highest number of Michelin stars in Europe. Feel inspired at the Guggenheim Museum in Bilbao; stroll by the royal palace in Santander; sample Asturias famous cider; be amazed by the Cathedrals Beach in Ribadeo or step back in time in medieval Mondoñedo.

It takes just over 5 weeks to walk the full Camino del Norte from San Sebastian to Santiago. The Camino del Norte last 100kms of the trail will take you all the way from the market town of Vilalba to historic Santiago de Compostela. You can also choose to start walking or cycling from different points along the way.

The Compostela Certificate on the camino del Norte

Highlights of the Camino del Norte

The basque country-side has a distinct language and identity. on my first trip, I really had a feel for the place, for Markina and Deba.

I also appreciated the coastal walk between the sea and mountains all the way into Galicia. This makes it scenic, refreshing and the food is scrumptious.

Weather on the Camino del Norte

The Camino del Norte has a mild climate, moderated by the Atlantic Ocean. This should help you decide when to get on the Camino Northern Way:

What to Bring on the Camino del Norte

The Camino del Norte is not dissimilar to other Caminos. Have a look at our packing ebook.

The first section of the Camino del Norte (the Northern Way route of the St James Way) begins in the beautiful and sophisticated coastal city of San Sebastián, a gastronomic mecca home to several Michelin-star restaurants. From San Sebastián (or Donosti in Basque), the Northern Way travels West along the green hills of the Basque coastline. The trail passes the historic town of Gernika, made famous by Picasso’s masterpiece and finishes in Bilbao, where you should visit the impressive Guggenheim Museum. The Basque Country is renowned for its cuisine, its ‘pintxos’ and some of the country’s best chefs so this Camino walk will be an unforgettable gastronomic experience.

The second part of the Camino del Norte, the Northern route of the Camino de Santiago, starts in the Basque city of Bilbao and finishes in the pretty coastal city of Santander, in Cantabria. Explore the old town in Bilbao and its magnificent Guggenheim Museum before you head West along the coast towards Santander. Along this section, you will walk by seaside towns, lovely beaches and rocky bays. This is an area of outstanding natural beauty and you will be able to admire the contrast between modernity and tradition, in the many towns and historic stops along the way. The North Coast in Spain is renowned for its cuisine so prepare for an unforgettable gastronomic experience on the Camino.

Camino from Santander to Ribadesella

This Camino Trip will see you travel along the third section of the Camino Norte (Northern Way), which is part of the famous Camino de Santiago de Compostela; the Way of Saint James. This section of the Camino de Santiago will see you begin in Santander and finish in the pleasant seaside resort of Ribadesella. The mountains of the North provide a spectacular contrast to the charming and picturesque coastline. This region is renowned for its cuisine and the walk will see you enjoy a high level of comfort and an unforgettable gastronomic experience. Customise the Full Camino del Norte here.

Camino from Ribadesella to Oviedo

The third section of the Camino del Norte, the Northern Way route of the famous Camino de Santiago, starts in the pretty seaside town of Ribadesella at the foot of the Picos de Europa, by the Cantabrian Sea. The trail takes pilgrims to the tranquil villages of rural Asturias where you can taste the delicious local food and famous cider, before finally arriving in the medieval city of Oviedo, the capital of the region. Asturias has excellent cuisine and is also famous for its cider. Oviedo marks the beginning of the Camino Primitivo, the original way to Santiago de Compostela, the most popular route until the 10th century. Select and edit the Full Camino del Norte here.

Camino from Oviedo to Vilalba

This stretch along the coast is a true Gem. It is very quiet and there are not so many pilgrims visiting this section. Make it yours to edit the Full Camino del Norte start and finish here.

Camino from Villalba to Santiago

A brief history of the Camino del Norte

This Camino de Santiago route attracted not only pilgrims from the North of the Iberian Peninsula but also from overseas from faraway lands such as Scandinavia, England, Flanders, and Germany: many pilgrims would make the journey by sea to some of the ports of Northern Spain before continuing on foot to Santiago de Compostela. Many of them would also stop in Oviedo to visit the relics of San Salvador.

From Oviedo, you can actually continue your trip by joining the Camino Primitivo.