The Camino Ingles, or English Camino, is the historic Camino de Santiago route traditionally taken by the pilgrims of Northern Europe, particularly Britain and Ireland.

Where do the Camino Ingles begin?

The Camino Ingles has two traditional starting points: the port cities A Coruña and Ferrol. Pilgrims traditionally took this Camino Route from Northern Europe, Britain, and Ireland on their way to Santiago, and it was also an important trading route. Even if A Coruña is a larger and more attractive town than Ferrol, only a few pilgrims start from there because it’s situated less than 110km from Santiago de Compostela. If you start from A Coruña, you won’t qualify for a Pilgrim Certificate unless you have already completed the Celtic Camino in Ireland. 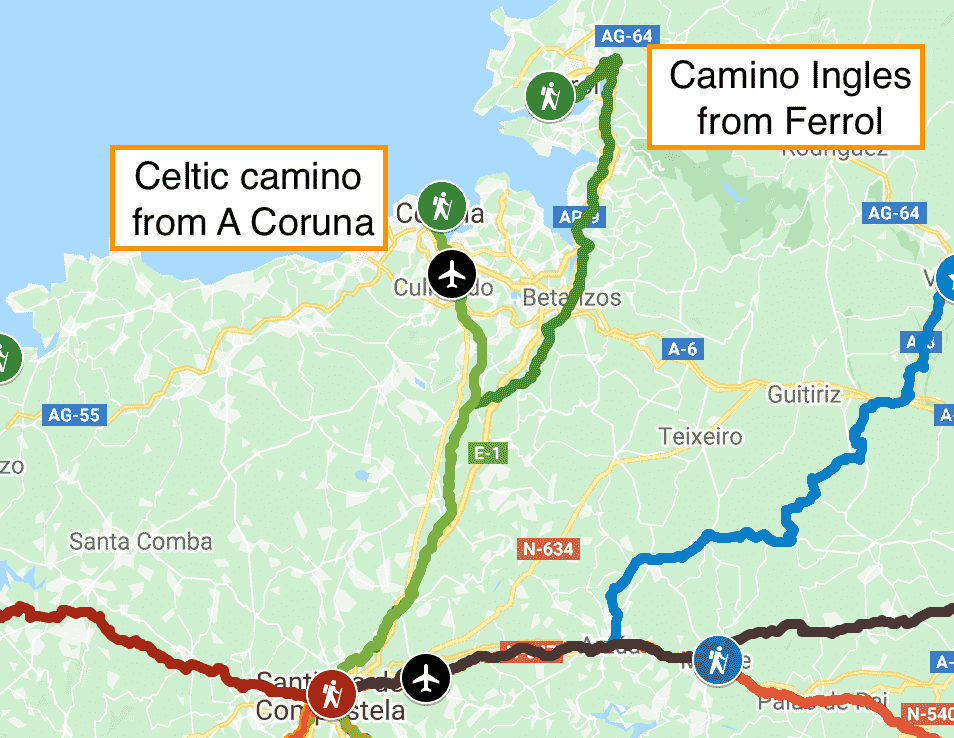 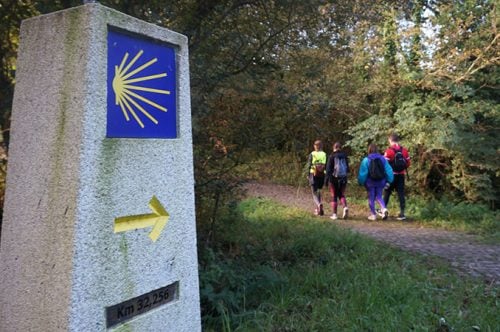 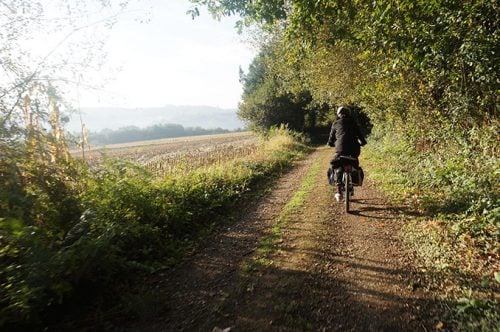 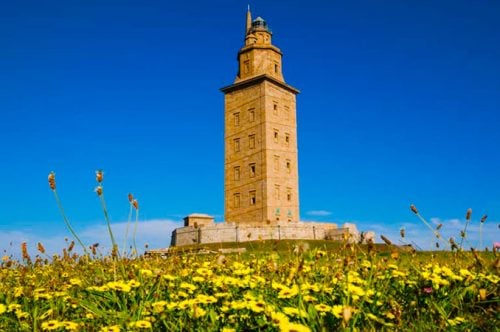 Camino Ingles or The Celtic Camino

On this route, you will enjoy nice coastal views for the first two walking days, and you will stop in pretty towns en-route, such as Pontedeume and Betanzos. The second part of this Camino route heads inland towards Santiago de Compostela across Galicia’s green countryside. If you are travelling in the Spring, make sure you get to experience Ferrol’s impressive Easter festival: Semana Santa in Ferrol.

Please note, in order to get your Compostela pilgrim certificate in Santiago you will need to walk a minimum of 100kms into Santiago (we suggest you start in Ferrol) or cycle at least the last 200kms of the route. While you can cycle the Camino Ingles, you won’t be entitled to a Compostela certificate, as the route is not long enough to qualify for it.

Camino Ingles From A Coruña, also known as the Celtic Camino

The city of A Coruña is also a traditional starting point but fewer pilgrims start the Camino from there because it is situated less than 100 kilometres from Santiago de Compostela.
That means that if you are starting your route from A Coruña, you won’t qualify for a Pilgrim Certificate – you will have to start from Ferrol instead.

We have also written about 7 things to do on the Camino Ingles, which might also help make up your mind if this is the right route for you.

For over 1000 years, pilgrims from all over the world have walked the Camino Ways across Europe in their quest for spirituality. Making the pilgrimage to Santiago de Compostela in Spain, they encountered a variety of people, cultures and beliefs, leading to friendship and new experiences. This continues today with the Camino de Santiago being the most well known and well-loved walk in the world. More than just a walk, the Camino de Santiago is an unforgettable and unique journey for the body, mind and soul.

When to go on the Camino Ingles

The Terrain on the Camino Ingles

The landscape is hilly so on most days, you will ascent and descent approximately 300m. The first few days along the beautiful coast are slightly more difficult than the days approaching Santiago de Compostela.

What To Bring On The Camino Ingles?

Our Camino packing guide ebook is free to download. This will help you decide what to bring on your Camino.

The Sections Of The Camino Ingles

We offer 2 Camino Ingles Self-Guided Route options, but you can customise all our routes to start wherever you live.

The first two walking days of the Camino Ingles from Ferrol are beautiful, as you weave along with the coast soaking in the seaside views.

The towns you visit along the way are quaint and pretty, with Pontedeume and Betanzos being particular highlights.

You can sit and rest or take a cooling dip at A Magdalena beach as you make your way between towns. Betanzos town is full of history and wonder, and you will have a great time exploring its historical buildings.

Bruma Meson do Vento and Sigüeiro are your final two stops before you reach the sacred City of Santiago de Compostela. The landscape in the lush green area of Ordes on the way to the Church of San Xiao is an idyllic taste of the countryside and your last rural experience on this Camino route.

Ferrol is home to one of Galicia’s most renowned and important Easter festivals. If you are traveling during Spring, Semana Santa de Ferrol is an absolute must-see.

The Camino Ingles From A Coruña (The Celtic Camino) Route Description

The English Celtic Camino is becoming really popular with walkers from all over the world. In ancient times pilgrims from the UK and Ireland would have arrived by boat to the port of A Coruña to continue their Camino journey.

Starting 75km outside Santiago Compostella, The English Celtic Camino traverses the rugged Galician coastline before cutting inland and joining the English Camino from Ferrol in Bruma Meson de Vento. This walk can be completed on a 4-night trip.

Recently this route was less popular with pilgrims as they could not receive their Compostela. The cathedral in Santiago has allowed special provisions for pilgrims who walk routes such as The Kerry Camino in Ireland before they arrive in Spain to claim their certificate.

History Of The Camino Ingles

The pilgrimages from Scandinavia and the British Isles began in the 12th century. One of the most noteworthy episodes occurred in 1147 with the arrival of a squadron of crusaders on their way to the Holy Land. This squadron tookpart in the conquest of Lisbon, aidingthe first king of Portugal in his struggle against the Muslims. Before facing any bellicose encounter, crusaders from England, Germany, and Flanders would visit the tomb of St. James.

The first maritime itinerary recorded between 1154-59 by the Icelandic monk, Nicholas Bergson, describes the voyage from Iceland to Bergen (Norway), Aalborg (Jutland) and Vyborg, sailing down the Kiel Canal, which marks the border between Denmark and Germany. This monk continued on foot to Rome, on his way to the Holy Land. Icelandic and Scandinavian pilgrims travelling to Santiago took this maritime route to Denmark, continuing their journey on foot to Roncesvalles, or by boat to the north of the Iberian Peninsula. During the Hundred Years War that raged between France and England throughout almost the entire 14th century and the first third of the 15th century, the British used boats to travel to Santiago. The vessels chartered for this purpose would set sail with permission from the Crown from London, Bristol, Southampton, and Plymouth and return to England loaded with goods from Galicia. The presence of these pilgrims in Santiago is well-documented by the ceramic pieces and coins dating from the 14th and 15th centuries found during excavations in the cathedral.

Other traces of seafaring pilgrimages can be found in the offerings made to the Apostle. The most outstanding is the famous portable alabaster altarpiece depicting the life of St. James, which was donated to the cathedral of Santiago de Compostela in 1456 by Father John Goodyear, who was the parish priest of the church of Chale on the Isle of Wight (Diocese of Winchester). This work of art, part of the collection of the Cathedral Museum, portrays five scenes in the life of the apostle: his vocation, his preaching in Hispania, his martyrdom in Palestine, and the transfer of his body by boat to Galicia.

Another splendid offering related to the pilgrimages undertaken from the British Isles is the ‘Pearl cross’. This piece, crafted in gold and silver, displaying enamel work and studded with pearls and gems, was created in Paris around 1375-1400 and donated by King Jacob IV of Scotland (1475-1513). The divorce of Henry VIII (1509-47) from Catherine of Aragón caused him to break ties with the Catholic Church, thus bringing an end to the pilgrimages from England.

Whether they were noblemen, princes, clergymen, or plain citizens, the pilgrims found refuge in the hospitals on the Camino Ingles. 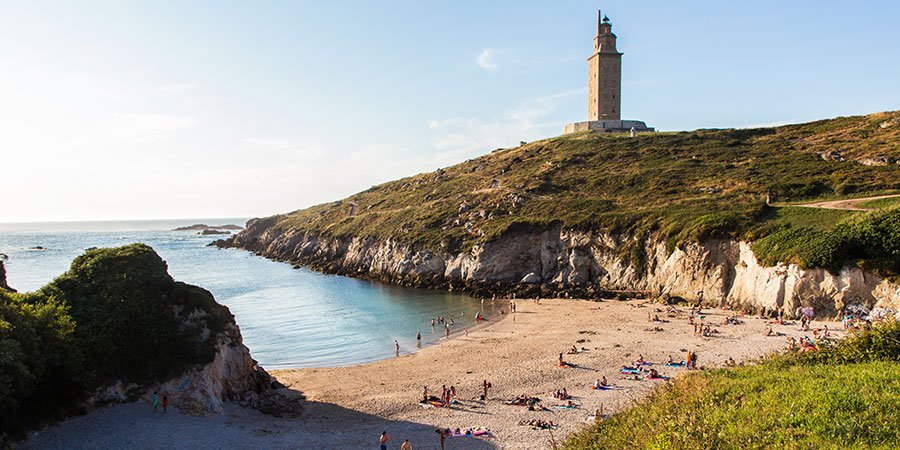 From Ferrol and A Coruña, the route was less arduous thanks to the services provided by the religious order of the Sancti Spiritus. Starting in the 14th century, the Franciscan Order opened the doors to their dwellings in Pontedeume and Betanzos under the auspices of the nobleman Fernan Perez de Andrade, ‘0 Bo’.

Along this stretch, which headed out from Ferrol, there were pilgrim hospitals run by the Hospitalers of the Sancti Spiritus located in Ferrol, Neda, Miño, Paderne, and Betanzos.

Another pilgrim hospital dedicated to San Lorenzo was founded in Bruma in 1140, becoming part of the Hospital of Santiago in 1175.

In the stretch from A Coruña, the city offered pilgrims accommodation run by the religious orders of Los Angeles, Santa Catalina, and San Andres. As they proceeded along the Way, there were facilities in Sigras and Poulo. Some of these establishments had chapels and cemeteries, whose archives contained records of the deaths of English, Nordic, German, French, and Italian pilgrims. These records highlight the importance of the Jacobean pilgrimages along this route.