The Via de la Plata 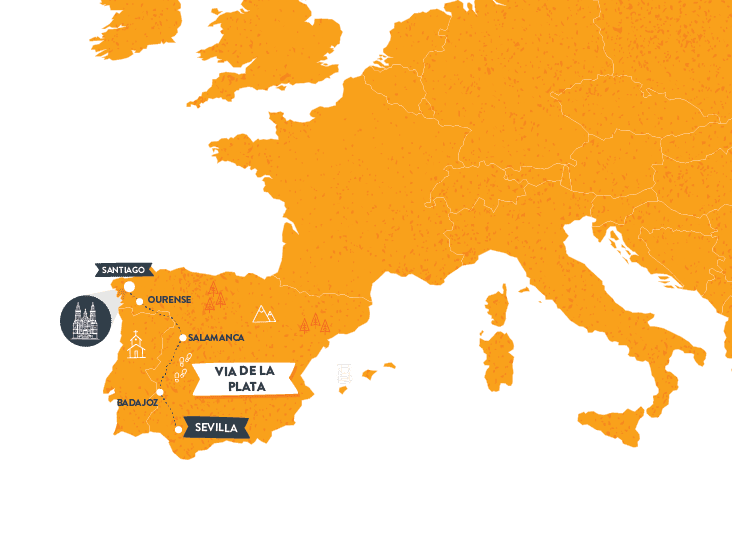 What is the Via de la Plata?

The Via de la Plata crosses the whole of Spain from South to North. This is the longest Camino route by far (over 1000km) and it was originally used as a trading route by the Romans to join the North and the South of Spain.  It was then used as a pilgrimage route, under the Moorish domination when the North African Christians headed to Santiago de Compostela.

The route follows the original ancient Roman road for the majority of the journey. Archaeological evidence of this has been discovered throughout, and some of the roads remain completely untouched in modern times. During the Roman Empire, the Via de la Plata was used to transport gold and copper to various regions from large gold mines in Las Medulas and Rio Tinto. Traveling the route today is like walking through history!

Our itineraries cover the most beautiful section of the Via de La Plata in Galicia. In order for you to obtain your Compostela, you can either cycle the last 200km from A Gudina or walk the last 100km from Ourense. The last sections of this historic itinerary are known to be the most spectacular and scenic of all the Camino routes, with a diversity of landscapes. Your way to Santiago will offer breathtaking mountain views and rolling hills. After Ourense, you will discover the most beautiful of all the last 100km sections to Santiago, with nice paths, forests, hills, and outstanding views.

The Via de la Plata is the most recommended route to those in search of an authentic Camino experience. Despite its long tradition and stunning beauty, the Via de la Plata is still confidential and less known than other popular itineraries, therefore it’s a great opportunity to discover the true Galician culture. On this gem of a route, you are likely to chat with the friendly locals, taste amazing traditional dishes, and be amazed by the unspoiled nature.

Highlights of the Via de La Plata:

When to Go on the Via de la Plata

You can expect brilliant clear skies and searing heat during the summer months, which is perfect for some walkers. Others will prefer the cooler months of spring and Autumn. These are the most popular times on the trail. Autumn is very popular with bird-watching enthusiasts. Availability is limited during the winter with many hotels closed.

The terrain of the Via de la Plata

The Via de la Plata in Galicia is a true blend of walking conditions. If starting in A Gudina, your adventure on the Via de la Plata will begin at 1000m in altitude. This part of Galicia is known to offer breathtaking views! There will be no major ascents, although at some stages do expect some steep climbs around +/- 400m. As you make your way down to Ourense, you will slowly leave the mountains behind and travel through the charming lush Galician countryside. The last 100km to Santiago de Compostela will be gentle, allowing you to complete long distances each day.

What to bring on the Via de la Plata

Download our free Camino packing guide ebook and find all the information you need to prepare your trip on the Via de la Plata.

History of the Via de la Plata

The Camino was laid out in early Christian times, taking advantage of older roads, in keeping with the practical nature of the Romans. During the early Middle Ages, the route was still in use, first with the Visigoths and later under Islamic rule.

The term Vía de la Plata (Silver Way) has its roots in the original etymological meaning from the Arabic ‘Bal’latta’, a term used by Moslems to designate this wide, stone-paved public-way, with its solid design, leading north to the land of the Christians. 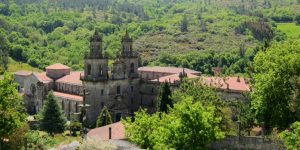 It was used, in part, by the infantry of Córdoba during the military expedition conducted by Almanzor against Santiago in August 997. The term Vía de la Plata, therefore, makes no reference to this precious metal.

In the late Middle Ages, the route was once again Christianised by the Andalusian Mozarabs, who found the pilgrimage to Santiago to be less perilous following the conquest of Seville and Cordoba by Ferdinand III.

The story recounting the return of the bells to the Cathedral of Santiago is related to the Vía de la Plata. With this symbolic act, the route between Córdoba and Santiago entered a new era, and as of 1250 it was used by pilgrims from Andalucía and Extremadura. Some would continue on to Astorga, linking up with the Camino Frances, while others would take the cut-off leading to Puebla de Sanabria- A Gudiña-Laza/Verín-Ourense-Santiago, which made the route shorter and more direct. The way through Laza is 214km in length, whereas the route through Verín is 233 km. 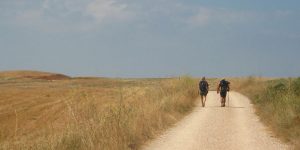 A third possibility takes pilgrims through Northeast Portugal, towards Braganca or Chaves, entering Galicia in the southern part of the province in the direction of Verín, continuing along towards Laza or Xinzo de Limia. These itineraries all converge in the city of Ourense. From there, the route continues to San Cristovo de Cea. Many pilgrims sought the hospitality offered by the monastery of Oseira. Others preferred to hurry on to Dozón. From this location, they would set out for Lalín, Silleda, Ponte Ulla and Santiago de Compostela.

As for the military orders in charge of safeguarding the Way, one of the most important is the Order of Saint James, on the Laza-Xunqueira-Ourense route. The Santiago commandery of Barra protected the stretch going from Codesedo, at the foot of Monte Talariho, where there is a roadside shrine, to Vilar de Gumareites.

The Order of Saint John of Jerusalem (later the Order of Malta) set up a priory in 1170 and was responsible for protecting the Vilanova Bridge and the way at the far end of this royal town. The late 12th century Romanesque church is still standing, and, with the medieval bridge, constitutes a historical group of monuments. The Knights Templar were based in Santa Marina de Augas Santas and shortly before they were repressed, they had begun to build a church on the site of the ‘Forno da Santa’.