From the earliest days of the Camino de Santiago pilgrimage, there was a desire for the completion of the journey to be recognised in some way. Pilgrims used the scallop shell as a symbol of their arrival at the Tomb of St James. The Compostela Pilgrims Certificate.

However, this simple practice was easily debased. Vendors started to sell shells to pilgrims as they entered the city. Due to the prevalence of fraudulent practices, the Church had to impose the penalty of ex-communication on the perpetrators. From the 13th century onwards documents called “evidential letters” were used as a more effective way of recording a completed pilgrimage. These are the direct roots of the Compostela. 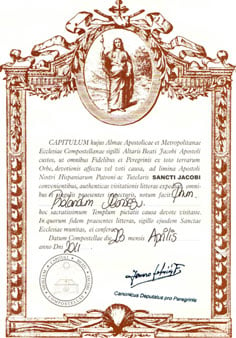 The Compostela was an important and useful document for pilgrims. In the 16th century the Catholic Monarchs constituted the Foundation of the Royal Hospital and ordered the construction of a hospital for pilgrims in Santiago. This was housed in the building now occupied by the Hotel Hostal de los Reyes Católicos . On presentation of their Compostela pilgrims were allowed to stay in the hospital for three days. The hospital looked after pilgrims’ health needs and it became the most important hospital in Galicia. Later in its history it became the centre of the faculty of Medicine of the University of Santiago de Compostela. In 1954 it was converted to a state-run Parador hotel. However the hotel continues the tradition of pilgrim hospitality by providing free meals for three days to 10 pilgrims on production of the Compostela.

In the 20th century, the growth of pilgrims arriving in Santiago by vehicular transport gave rise to a concern that the aspects of effort and sacrifice previously characteristic of the pilgrimage may be lost or diminished. It was also the case that there was a growth in certificates issued by other bodies which sought to imitate the traditional Compostela. Therefore the Cathedral of Santiago decided that to gain a Compostela a pilgrim had to provide evidence on a credencial that they had walked or travelled on horseback at least the last 100kms of their journey to Santiago and, if travelling by bicycle, the last 200kms. That rule still stands today. 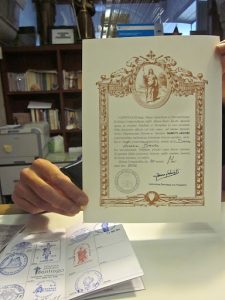 To be awarded the Compostela:

Children walking the Camino de Santiago: Children who have made the pilgrimage with parents, or in a group, and who have an understanding of the religious and spiritual nature of the Camino may also receive a Compostela.

However, if they are not yet old enough a certificate can be provided which bears the child’s name. In the case of very young children, their names can be inscribed on the Compostela of the accompanying adult. If you have any questions about this please ask in the Pilgrims’ Office.

The text of the Compostela

The text of the Compostela is written in Latin and it is the tradition of the Pilgrims’ Office to write the pilgrim’s name in Latin. The translated text is as follows:

“The Chapter of this Holy Apostolic Metropolitan Cathedral of Saint James, custodian of the seal of Saint James’ Altar, to all faithful and pilgrims who come from everywhere over the world as an act of devotion, under vow or promise to the Apostle’s Tomb, our Patron and Protector of Spain, witnesses in the sight of all who read this document, that: Mr/Mrs/Ms…………………has visited devoutly this Sacred Church in a religious sense (pietatis causa).

Witness whereof I hand this document over to him, authenticated by the seal of this Sacred Church.

When is the Pilgrims’ Office open?

Sundays and Festivals the office is closed from 2 – 4pm.

The Pilgrims’ Office is open during these hours every day of the year with the EXCEPTION of Christmas Day – 25 December, and New Year’s Day – 1 January. If you complete your pilgrimage on these days your Compostela can be obtained in the Cathedral.

For more information on the pilgrim’s certificate or any of the Camino de Santiago walking routes please contact us. 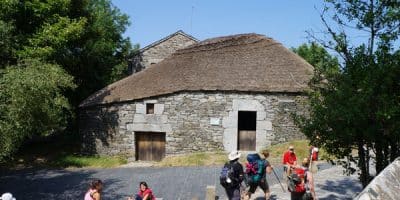