Camino de Santiago. All you need to know

What is the Camino de Santiago?

The Camino de Santiago, also known as the Way of St. James, is a renowned pilgrimage of medieval origin that sees pilgrims journey to the Cathedral of Santiago de Compostela in Galicia in the northwest of Spain.

Legend has it that the remains of the Apostle St. James the Great were buried in the Cathedral and discovered by a shepherd in the 9th century. The city of Santiago is named after St. James: Santiago de Compostela means St. James of the Field of Stars. If you’re a history buff, make sure you discover the history of the Camino.

Due to the enduring popularity of the Camino de Santiago and the many Camino routes, they have been listed as a UNESCO World Heritage Site since 1993. The Camino’s essential role has encouraged cultural exchanges between people from all over Europe and the world for many centuries.

So, what exactly is the Camino de Santiago?

Today, more than a pilgrimage, the Camino de Santiago is a unique experience and trip of a lifetime, with its routes attracting thousands of people from all over the world. Where does the Camino de Santiago start?

There is actually no singular starting point for the Camino de Santiago. There are many different routes to Santiago and in turn many starting points. The route you take depends entirely on your preference and interests and what you want to get out of the experience.

The reason for the huge variety in starting points is that the original pilgrims would have commenced their Camino journeys from their own homes. So that’s why so many different Camino ways have emerged over the centuries.

Despite this, there has been a clear favourite among the routes. The Camino Frances, also known as the French Way, is the most famous and most popular of the Camino routes. Due to this, Sarria, located 100km from Santiago, is the top starting point for pilgrims.

The Camino Portugues Coastal is the second most popular route, especially the last 100km starting in Vigo. If you are curious about our other popular starting points, make sure to have a look at our last 100km Camino collection. What are the Camino de Santiago routes?

The Camino de Santiago routes are a network of many different paths, all leading pilgrims to the city of Santiago de Compostela. Each route has its own history, heritage and charm and there is a route for every interest and ability.

Choosing the most suitable Camino walk for you is essential in order for you to make the most of this memorable experience. To help you decide, we have a guide to choosing your perfect Camino and you can also discover the experiences of previous pilgrims.

Each year, the Pilgrim’s Office in Santiago also releases a list of the most popular routes based on starting points, nationalities etc. These statistics can also help you choose the best route for you.

Based on those figures, our dedicated team have selected the Top Camino de Santiago walks and described what makes them unique. 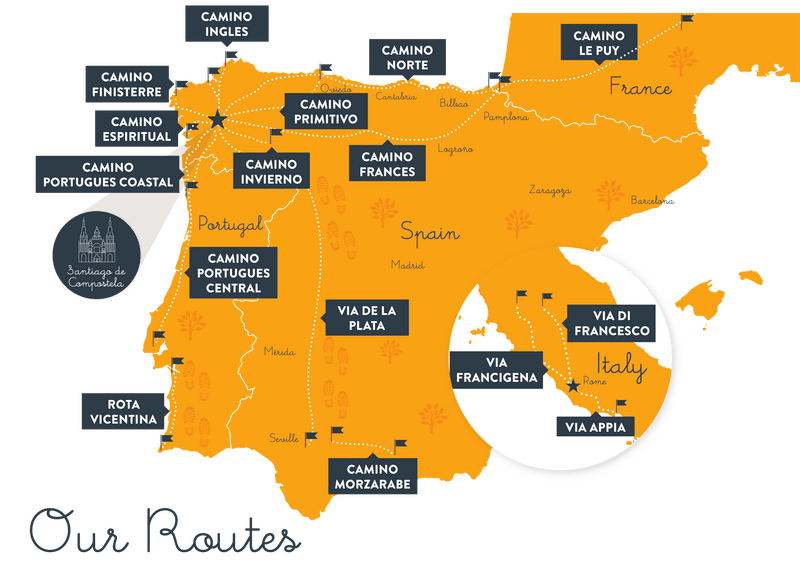 The Camino Frances is the most famous Camino de Santiago trail, featured in books and movies about the Camino, such as ‘The Way’ with Martin Sheen and ‘The Pilgrimage’ by Paulo Coelho.

While it’s not the oldest of the routes, it has been the most popular and well-known route ever since the Middle Ages. Its popularity is so great that 55% of pilgrims walking the Camino do so on the Camino Frances.

This route is 800km long and takes about 5 weeks to walk if you choose to start the journey from St Jean Pied de Port Camino Frances, but you also can start at any point along the route.

Many pilgrims begin their Camino in the Galician town of Sarria and walk The last 100 km of the Camino Frances in about a week. The Camino Frances is the most social Camino, so you’ll be sure to meet fellow pilgrims and maybe make some friends for life as you experience the authentic local culture and food along the way.

This route was the traditional trail to Santiago de Compostela taken by Portuguese pilgrims, and today the Camino Portugues is the second most popular trail for pilgrims.

This stunning walk weaves along the coastline north of Porto in Portugal and into Spain, taking in some beautiful fishing towns and scenery. The seafood along the route is gorgeous, with fresh produce served in most restaurants.

The Camino Portuguese Coastal starts in the colourful UNESCO city of Porto and follows the Atlantic Ocean before crossing by ferry to A Guarda, in Galicia, and the heart of the Rías Baixas wine region. A popular starting point is Vigo, which is at the beginning of the last 100km of the Camino Portugues to Santiago de Compostela.

Spend time on the white sandy beaches of Northern Portugal and Southern Galicia and soak in the laid-back atmosphere of maritime culture on this peaceful Camino route. The Camino del Norte (Northern Way) begins in the stylish city of San Sebastian in Spain’s Basque Country. San Sebastian is a seaside city that is world-renowned for its culinary excellence. This paradise for food lovers is one of the top 10 cities in Europe for Michelin-star restaurants; the only food problem you’ll encounter here is choosing where to eat!

The two most popular sections of this Camino route are the Camino del Norte from San Sebastian to Bilbao in one week and the slightly easier Northern Camino from Bilbao to Santander.

The Camino del Norte takes pilgrims along the coastal villages and towns of ‘Green Spain’, crossing the Basque Country, Cantabria and Asturias before heading inland towards Santiago, carrying pilgrims on a more off-the-beaten-track trail to Santiago.

You can take a dip in the sea to cool off on one of the multitudes of gorgeous beaches and enjoy the atmosphere of the many great towns along the way. The favourite route of the Spaniards, the Camino Primitivo is the oldest of the Camino routes. Also known as the ‘Original Way’, it is the route that has been in use since at least the 9th Century, when much of Spain was under Moorish control.

This challenging route starts in Oviedo in North-Eastern Spain and takes pilgrims on a 311 KM journey from Oviedo to Santiago. There is also the option to do the last 100 KM of the Camino Primitivo into Santiago.

Pilgrims walking the Camino Primitivo will have the chance to experience the UNESCO city of Lugo, considered the best place to eat in Galicia. The Camino Ingles was the preferred route for pilgrims from Britain and Ireland, who used to take the boat to one of these two coastal cities. This Camino route has two starting points: Ferrol and A Coruña, and it’s the shortest Camino route.

If you start your Camino in Ferrol, you will be able to get your Compostela Certificate in Santiago as you will be walking 100km. If you start in A Coruna however, you will need to combine this route with a 25km pilgrimage in Ireland as the route from A Coruna to Santiago is only 75km.

The Camino de Santiago is not limited to the routes mentioned above. Pilgrims from all over Europe were walking to Santiago de Compostela to experience the unique nature of the trails.

Interested in choosing a route on the Camino de Santiago that best suits your interests? Check out our Ultimate Guide to Choosing Your Perfect Camino for some inspiration, whether you’re a foodie, history buff or serious hiker.

Other Camino Routes include: While 92% of pilgrims choose to walk to Santiago de Compostela, approximately 5-8% of pilgrims prefer to do the Camino by bike (they are known as ‘Bicigrinos’ or ‘Bicigrinas’, bike pilgrims).

Cycling the Camino allows you to experience the trail on two wheels and in turn, you cover more ground daily. However, you’ll need to cycle at least 200km to receive your Compostela certificate in Santiago (as opposed to 100km walking).

Hitting the trail on a mountain bike is a thrilling experience, but we only recommend it to experienced cyclists and those familiar with bike maintenance. Who walks the Camino de Santiago?

People of all ages and backgrounds walk and cycle the Camino Routes each year. In 2019, people from 190 different countries arrived in Santiago de Compostela.

Camino Statistics released from the pilgrim’s office for 2020 showed that almost 54,000 pilgrims received their Compostela, with the majority of pilgrims coming from European countries and 76% doing it for spiritual reasons.

Many pilgrims do the Camino for religious or spiritual reasons, but many others experience it for its culture, heritage, or as a fitness challenge. Why should I walk the Camino de Santiago?

The Camino de Santiago attracts pilgrims from all over the world; nearly 350,000 Compostela pilgrim certificates were issued in 2019 alone (compared to just over 1200 in 1985), which will give you some idea of how popular it’s become in recent years.

The reason modern pilgrims walk the Camino ancient trail has evolved, and it’s now a rewarding experience for anyone who enjoys walking or cycling.

There are many ways to embark on this unique challenge and you will meet some wonderful people along the route and visit beautiful Spanish sites. Here are just a few things to enjoy along the way: How far do I need to walk?

The beauty of the Camino routes is that you can walk as much or as little as you want; you could spend weeks walking from Le Puy to Santiago, one month walking from St Jean Pied de Port, a week or just a few days.

There is a Camino route for everyone but the one thing to keep in mind is that in order to receive your Compostela pilgrim certificate, you will need to walk at least the last 100km into Santiago de Compostela or cycle the last 200km.

In addition, you should stamp your Pilgrim Passport, also known as the ‘Credential’, along the way to prove that you have indeed walked the distance.

How do I follow the Camino de Santiago trail?

The Camino de Santiago trails are very well marked with scallop shells and Camino markings painted everywhere (trees, roads, walls…). All you have to do is simply follow the yellow arrows and they’ll guide you to Santiago de Compostela!

For more information about the Camino de Santiago and its routes, please don’t hesitate to contact us. You can also plan your trip using our unique Camino route planner.