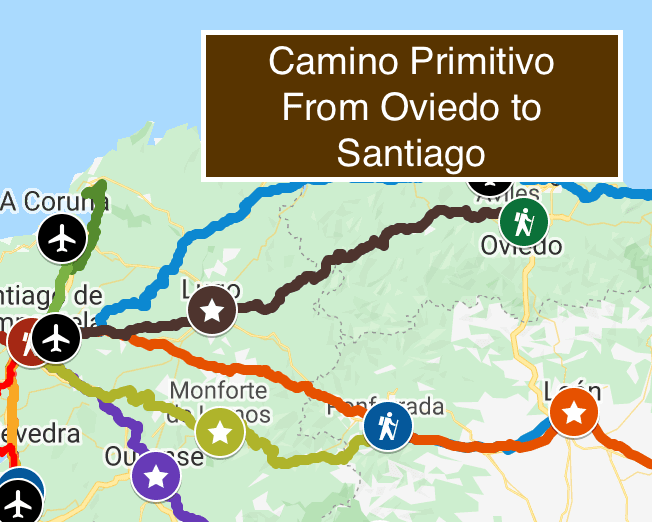 What is the Camino Primitivo? The Camino Primitivo or Original Camino is the oldest Camino de Santiago route. King Alfonso II the Chaste was the first-ever pilgrim on this route. He walked the Camino from the city of Oviedo, in Asturias, to Santiago in the 9th century with a mission: to confirm the remains found in Santiago were indeed those of St James the Apostle.

At the time Oviedo was the capital of the Kingdom of Asturias and the King’s pilgrimage inspired many others to make the journey to Santiago de Compostela.

Pilgrims on the Camino Primitivo came not only from Asturias and other parts of Northern Spain but from further afield and overseas. Pilgrims from northern countries would travel by sea and land on the Northern shores of Spain before continuing their journey on foot.

Once the capital of the Kingdom was moved to Leon, however, the Camino Frances took over as the main route to Santiago for pilgrims from the 11th century.

However, many pilgrims still chose to visit Oviedo San Salvador Cathedral, a pilgrimage destination in its own right. The ‘Saviour’ Cathedral is home to a shroud believed to have been used to wrap Christ’s head after his death.

Today, less than 5% of pilgrims to Santiago choose the Camino Primitivo route. The route is challenging but beautiful and unique.

If you are not sure this challenge will be manageable but still would like to discover the first-ever Camino route, don’t worry, you can start your journey from the city of Lugo and skip the mountainous and rural section of the trail on the last 100kms of the Camino Primitivo.

Compostela certificate on the Camino Primitivo

In order to get your Compostela pilgrim certificate in Santiago you will need to walk a minimum of 100kms into Santiago (we suggest starting in Lugo) or cycle at least the last 200kms of the route (from Grandas de Salime, customise the full Camino Primitivo route here).

What not to miss on the Camino Primitivo route:

Its mountainous and challenging terrain makes it a difficult trail for Camino newbies but perfect for adventurous pilgrims and those looking for a more rustic Camino experience.

The trail is still wonderfully rugged, rural, and untouched in many parts, particularly the first section of the trail from Oviedo to Lugo. As you walk the quiet tracks and forests of the Camino Primitivo you will nearly feel as if you are stepping back in time.

An easier section of the route starts in Lugo.

Lugo is a great little city packed with things to do, see and taste. It is located over 100kms away from Santiago, so it will mean you can get your Compostela certificate.

Weather on the Camino Primitivo

The Camino Primitivo has two parts:

What to Bring on the Camino Primitivo

The Camino primitivo is not dissimilar to other Caminos. Have a look at our packing ebook.

What is the Camino Primitivo distance?

It will take you two weeks approximately to walk the full Camino Primitivo from Oviedo, which is 311kms.

We recommend you take at least one rest day approximately after the first week (Lugo will be a good spot for a rest day). If you rather only walk from Lugo, you can complete the trail on foot in just one week.

The Camino Primitivo, along with the Camino del Norte, is listed as a UNESCO World Heritage Site since 2015.

The first stage of the Camino Primitivo, across the mountains, is one of the most challenging of all Camino routes but the scenery is breathtaking.

Camino from Oviedo to Lugo

Oviedo is the starting point of the Camino Primitivo but this was also a route traditionally followed by pilgrims from further afield in Northern Spain and Europe.  The route crosses the Cantabrian Mountains giving walkers outstanding views of the Picos de Europa and passes quaint mountain villages in Asturias and Galicia.

Camino from Lugo to Santiago

Camino Primitivo continues from Lugo towards Santiago de Compostela through peaceful forests and farmland, joining the final stretch of the Camino Frances in the lively town of Melide where you should try Galicia’s most classic dish: octopus. The city of Lugo is one of the highlights of this Camino route. Lugo’s old town is nested inside the only fully preserved Roman wall in Spain, an impressive UNESCO World Heritage site.

King Alphonse II, the Chaste, played an important role in establishing that the remains unearthed in Compostela belonged indeed to the Apostle Saint James. He also sponsored the building of the first basilica in the city and promoted the establishment of the early cult to Saint James.

The Camino Primitivo was probably a safe and well-traveled route until the present-day Camion Frances from León, the new capital of the kingdom, consolidated its position as the major Camino route in the late 10th century. Nonetheless, the Oviedo route to Santiago remained a popular alternative, due particularly to the spiritual value of the magnificent collection of relics at the cathedral of San Salvador de Oviedo and the basilica of Lugo with its permanent exhibition of the Holy Sacrament.

The many hospitals set up along the way bear witness to the importance of this route, especially those in remote spots high up in the mountains. They served a fundamental purpose: attending to the pilgrim, who, in the region of A Fonsagrada, was forced to cross areas of breathtaking beauty yet also represented an arduous challenge for the most part of the year, with snowstorms, strong winds, and treacherous paths.