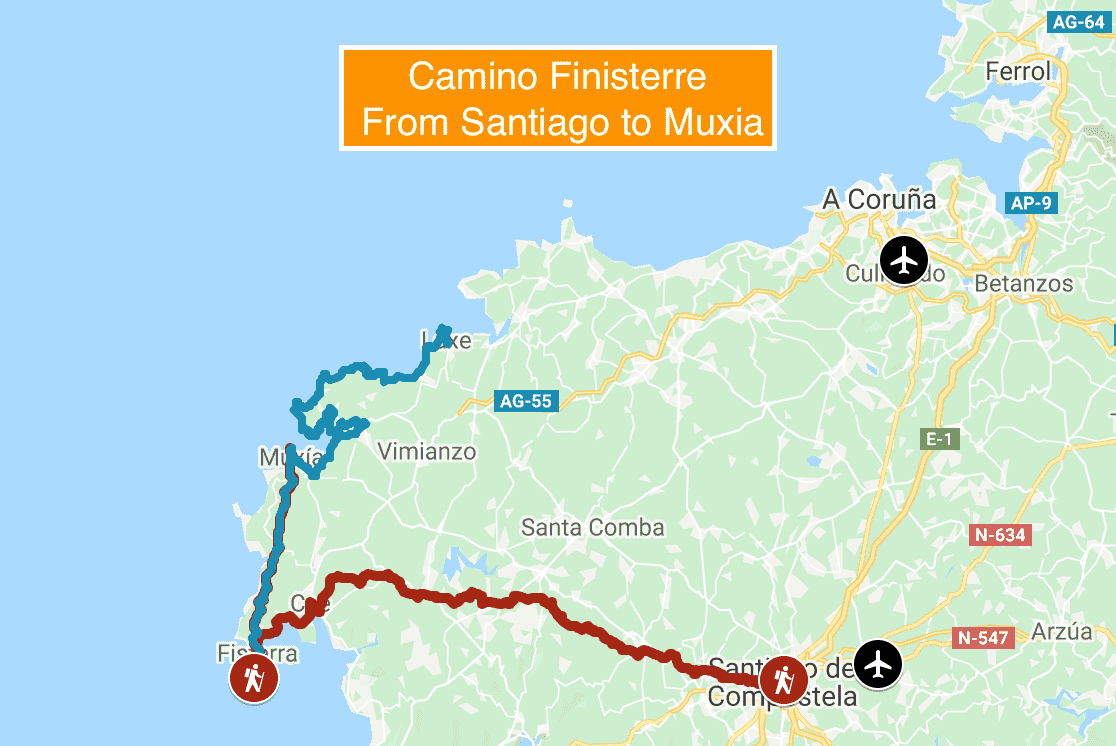 The Camino Finisterre or Camino de Fisterra is a unique route from Santiago to Cape Fisterra, believed to be the “Edge of the World”. This is the only trail starting in Santiago de Compostela and takes pilgrims West to the stunning Atlantic coast of Galicia.

Over 4 days you will join many pilgrims in continuing their journey to the end of the Camino at Cap Finisterre (Fisterra). Once in Fisterra, enjoy a well-earned swim in the sea.

For a really special experience, we recommend continuing for another 2 days, along the rugged coast to Muxia. This quaint fishing village is famed among pilgrims for its picturesque sanctuary of the Virgin by the ocean and ‘magic’ stones.

This Camino route pre-dates Christianity, as pagans would head to mythical Cape Fisterra on the Costa da Morte (Coast of Death) where they believed the sun died and the worlds of the dead and the living became closer. Prayers would be said and offerings would be made to please the gods. It was a place rich in pagan rites, myths, and legends. Fisterra is also believed to be the location of Ara Solis, a magical place and altar dedicated to the dying sun.

Highlights of the Camino Finisterre

The Camino Finisterre to Muxia is taking you through rural Galicia, up to a wonderful rugged coast:

Why going to Cap Finisterre – Fisterra?

Fisterra was believed to be the most westerly point in Europe by the Romans, the place where the sun disappeared into the ocean and they named it accordingly: Finis Terrae, land’s end. This was the place also believed to be the final destination of a route marked in the sky by the Milky Way. As they arrived, pilgrims used to burn the clothes they had walked in for so many days, as an act of closure and purification. Many also went for a swim in the sea, which we recommend, as a much more eco-friendly activity!

From Cape Fisterra, you can continue your Camino journey along beautiful coastal paths to the sanctuary of A Virxe da Barca in Muxía, a traditional pilgrimage destination in a stunning location overlooking the Atlantic Ocean.

Camino Finisterre from Santiago to Muxia

Contact our travel team to learn more about the Camino Finisterre.

What’s the weather on the Camino Finisterre

Although you can go year-round on the Camino Finisterre, March to November are the most popular period to walk or cycle.

What to bring on the Camino Finisterre

The Camino Finisterre is not much different from the other Camino de Santiago. Please download our Camino Packing ebook.

Continue your Camino heading West from Santiago de Compostela to Fisterra, the end of the world! The quiet Finisterre Way, part of the famous Camino de Santiago, the Way of Saint James, is the only route starting in Santiago. This Camino route passes quiet villages, remote farmland, unspoiled landscapes and reaches the sea cliffs of the westernmost point in Spain, at Cape Fisterra.

After Fisterra, the trail follows the stunning craggy coastline of Atlantic Galicia to the fishing village of Muxía. This beautiful region of Galicia is known as the ‘Coast of Death’ and Fisterra (Finis Terrae) was once considered to be the end of the world! See Santiago to Muxia

The Fisterra Camino is frequently referred to in odeporic literature. The oldest story is that of George Grissaphan, a Magyar knight from the 14th century. The story recounts his adventures as a pilgrim and hermit in Fisterra. In the late 15th century, Polish pilgrim Nicholas von Popplau journeyed to Muxía after having visited Compostela. He described the remains of the “wrecked ship, made of genuine stone” belonging to the Virgin Mary.

Read our latest Camino Finisterre articles on our blog.