Camino del Norte. The northern coast of Spain is not the sole preserve of pilgrims on a religious journey. Lisa Williams travels the picturesque route by car and finds her spirits lifted along the way. Basque to the future in northern Spain.

People flock in their thousands to the lush northern coast of Spain as part of the Camino de Santiago pilgrimage but there’s plenty there for non-believers too. 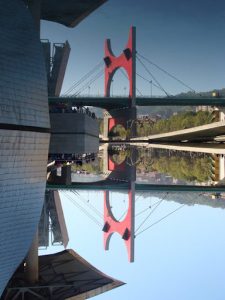 We did the trip along the northern coast of Spain on our own pilgrimage of sorts – to attend a wedding at Santiago de Compostela and to enjoy the food, drink and scenery on the way.

And I hold my hands up now and admit that we didn’t follow in the footsteps of the Medieval Christians by walking the 600 kilometres of our chosen route – from Bilbao to Santiago – but hired a car so we could fit it all into a week.

Not before we had seen the sites of Bilbao, however, where the car is swiftly becoming a mode of transport non grata.

The largest city in the Basque Country has successfully redeveloped itself from a rough hub of industry to a modern cosmopolis, and the change of image is reflected in the attitude of the people who seem super-keen to prove the city’s cultural and green credentials.

The makeover has been powered in part by the establishment in 1997 of a Guggenheim Museum, a curvy metallic structure which sits resplendent on the south bank of the river Nervion, just two minutes from our classy, art-themed Hotel Miro.

The Guggenheim houses a permanent selection of modern art, as well as temporary exhibitions of paintings, photography and installation art. The entrance fee and cafe are a bit steep by Spain’s standards, but value for money comes in the form of free tours around the gallery by interesting and informative guides, who look like works of art themselves in their chic monochrome uniform.

We discovered that Bilbao does tapas as pretty as a picture too, and on one hazy evening we lost ourselves among the Siete Calles, a maze of seven pedestrianised streets in the old town where the bars specialise in ‘pintxos’, bite-size treats of varying complexity to accompany your beer.

Compared to the bustle and optimism of Bilbao, Llanes – where we stopped for a two-night stay – was positively bucolic.

The art-loving owners of the Hotel El Babu have furnished their comfortable guest house with photography, gallery catalogues and a modern decor accented with acid colours.

But the view from the ceiling-to-floor window of our charming bedroom was like something out of The Sound Of Music: all we could see were the verdant slopes of the Picos de Europa national park and the hotel’s garden and vegetable patch below. And we could hear nothing other than the odd tinkle of bells from the cattle grazing nonchalantly nearby.

We eventually willed ourselves to leave the comfort of our room and, against the advice of our friendly hosts who warned the settling fog would hamper our hiking attempts, we took to the hire car to venture up into the hills.

We should have known something was up when we realised we could only see one foot ahead of us as we drove to the area’s viewing point – famous for its 360-degree view of the hills and the coast – or when we saw just one other car parked at the visitor centre.

But our spirits were still high as we trundled off up the path in search of fresh air, exercise and the beautiful views we had heard so much about. After 10 minutes we realised we could have been walking anywhere, so thick was the fog, and we weren’t sure what the cow bells we could hear were attached to.

After 15 minutes, we started to feel disorientated and had a scary moment when we weren’t sure we could locate the car. And when we did find it and start our approach back to the hotel like disgraced children we saw the ‘cows’ were actually bulls. We thanked the heavens that our hike had been aborted before they’d caught sight of us.

Such is the climate of that area that two hours later we were lying on the white sands of a nearby beach, laughing about the incident, but the cow bells we could hear from our room that evening were considerably less comforting than they had been the night before.

Our next stop was a quirky inland town called Oviedo. The film director Woody Allen fell in love with this place when he first visited, and featured the area in his film Vicky Cristina Barcelona. The people of Oviedo are fond of him too, and have paid tribute by erecting his statue in one of their streets.

The final destination of our journey did not let us down either. Only people with the hardest of hearts could fail to be moved by the sight of pilgrims reaching the Cathedral of Santiago – where Saint James is said to be buried – after weeks of walking.

Around the impressive Baroque-style building groups of pilgrims young and old worship together after a taxing but spiritual journey, and nearly everyone is crying.

It was a humbling sight. Basque to the future in northern Spain