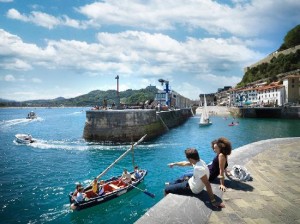 San Sebastian is at the beginning of the Northern Way or Camino del Norte.

Tradition and modernity go hand in hand in this “small” big city with touches of the Belle Époque (Golden Age), which has a top-flight cultural agenda with its international film and jazz festivals and first-class cultural programme.

More than that, San Sebastian is the world capital of the pintxo. Gastronomy rivals nature as the most attractive feature of this city, that’s world-famous for its cuisine and chefs and boasts 16 Michelin stars.

San Sebastian, or Donostia in Basque, is a coastal city in the Basque Country region of Spain. It is known for its stunning beaches, delicious cuisine, and vibrant culture. Here are some highlights of the city:

In the oldest part of San Sebastián, the churches of San Vicente and Santa María del Coro await you, the former Gothic and the latter Renaissance-Baroque. An old Dominican convent is nowadays the San Telmo Museum, whose archaeological and ethnographic collections, together with its paintings, are worth a leisurely visit. These busy streets lead you to the porticoed Plaza de la Constitución. Among its many balconies – numbered and painted white, betraying its origin as a bullring – stands the old Neoclassical City Hall, converted into the Municipal Library.

La Alameda del Boulevard leads into the Romantic city, which emerged after demolishing the old walls. On the banks of the Urumea, you can make out the Victoria Eugenia Theatre and the María Cristina Hotel, built in Neoplateresque style. Spread through this rationalist street pattern, you can also visit the Plaza de Guipúzcoa, with its gardens, the Provincial Government building, the Koldo Mitxeleria Cultural Centre and the Post and Telegraph Office.

Also, San Sebastian Cathedral, el Buen Pastor, was built in Neogothic style. Once again, there are aristocratic houses on the bank from the beginning of the 20th century, leading to the María Cristina bridge, the most monumental of those crossing the river. Four lamps by the sculptor Mariano Benlliure light the way to the railway station, designed by Eiffel. On this side of the river are the modern districts of Eguía and Gros. On Gros Beach is the modern Kursaal structure, designed by the architect Rafael Moneo.

San Sebastián is a cosmopolitan city with a strong Basque character, which is clear in its cultural events. The “tamborrada” or “Semana Grande“, with its fishing boat regatta, tells us something of the tradition. At the same time, its prestigious film and jazz festivals say a great deal about its international vocation. All these are occasions when it is well worth enjoying the city, although you will need to book accommodation in advance.

One of the best ways of touring its districts and approaching its culture is through cuisine. Basque cookery has international prestige thanks to its raw materials and the skill of its cooks, who have both traditional and imaginative repertoires. It must be said that some of the most renowned restaurants in Spain are in San Sebastián. Recipes made with vegetables, fish, and shellfish must always be accompanied by chacolí from Guetaria/Guetariako Txakolina, with its own Denomination of Origin.

The province of Guipúzcoa satisfies any traveller’s tastes, offering a long coastline of excellent beaches and fishing villages. At the same time, inland, there are natural areas where you can find important historic towns. Going along the coast from France towards Vizcaya, you will have the chance to visit the historic centre of Hondarribia/Fuenterrabia, declared a Historic-Artistic Monument, and to stay in its Parador de Turismo. Other towns that combine interesting monuments with extensive beaches are Zarautz, Getaria, Deba and Mutriku.

Rivers and valleys lead you inland.

Following the course of the Oria, the historic towns of Tolosa, Ordizia and Lazkao preserve important legacies of monuments. The Urola valley has the old town and spa of Cestona/Zestoa, the medieval streets of Azpeitia and the Sanctuary of San Ignacio de Loyola. This Baroque site is the centre of Basque religious life. Bergara, one of the smartest towns in Guipúzcoa, and the lovely houses of Elgeta unfold along the Deba valley.

In addition to this wealth of monuments, this Basque province has a natural heritage which is perfect for practising many low environmental impact sports. The Aitzkorri, Aralar, Aiako-Harria, and Pagoeta natural parks also show us the quality of their ecosystems.