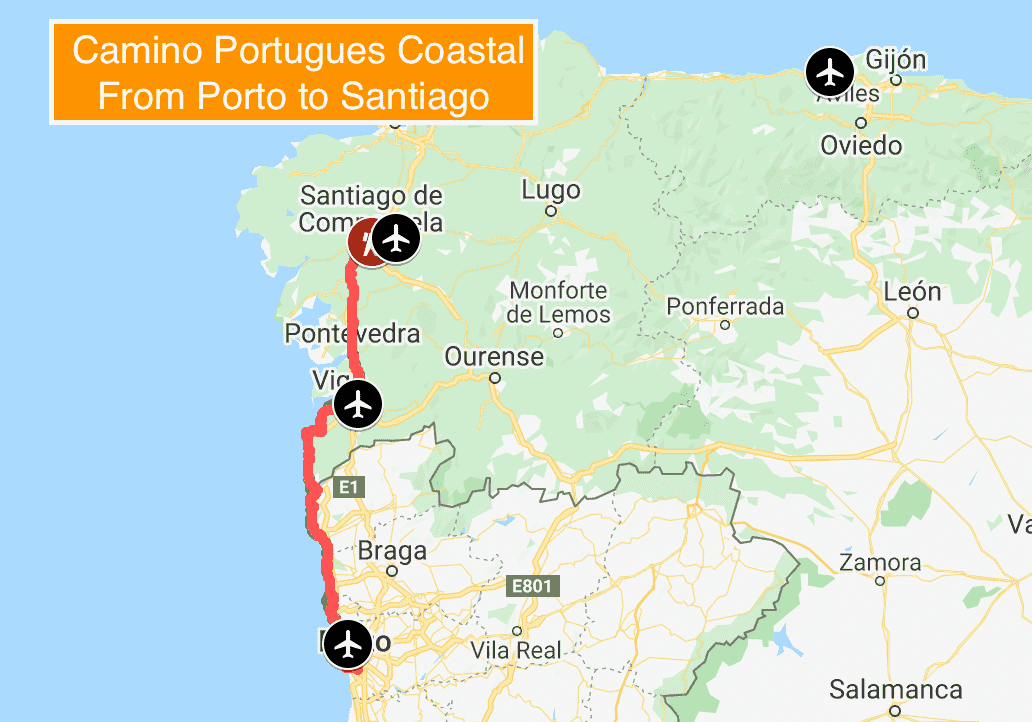 Keeping the Atlantic Ocean as your companion, this Camino route starts in the gorgeous UNESCO-listed city of Porto and will take you to charming seaside towns and villages in Northern Portugal such as Viana do Castelo and Vila Praia de Ancora before crossing the River Minho by ferry to A Guarda in Galicia.

Once in Galicia, you will be walking in the heart of the Rías Baixas, the lower bays, home of the famous Albariño white wine. From Baiona to Vigo you will enjoy wonderful views of the bay and the magical Cies Islands. We recommend you take a rest day in Vigo and take the opportunity to visit this paradise, just off the coast of the city and a short ferry journey away.

As you reach the town of Redondela and head inland, you will be joining the classic Camino Portugues central trail and start meeting many other pilgrims on their way to Santiago.

You can walk the Full Camino Portugues Coastal Route in just under 2 weeks, or 1 week if you are cycling from Porto. If you wish to walk it and have only 1 week, you can do the last 100km of the Portuguese coastal. You can also choose to do a section of the route and pick your starting point.

You will discover the wild Atlantic beauty and sandy beaches of Northern Portugal and Galicia, taste delicious seafood and wine, stay in fishing villages, and feel refreshed by the coastal feel of this scenic Camino de Santiago trail.

Highlights of the Camino Portugues Coastal

We have compiled some of the must-sees of the Route, please note that you can also combine and start in Lisbon if you wish to:

Cycling the Camino Portugues Coastal from Porto to Santiago 1 week

Short Break of the Camino Portugues Coastal from Porto 3 days

Want to bring your family on the Camino Portugues Coastal. Have a look at our Camino de Santiago Family Holidays below.

Families on the Camino Portugues Coastal

When to go on the Camino Portugues Coastal Route

Yes, this Camino is in Spain, but it is also in Galicia. So winter is wet and summer is mild. The most popular time to go remains Spring and fall, but Summer’s daily average is approximately 25 degrees Celsius… Not burning hot!

The first week, from Porto to Baiona, is mostly flat along the coast. The second week from Baiona to Santiago is a tiny bit more hilly with daily ascent and descents of 400 metres.

The trail is very well marled and the paths are good. So no need for heavy hiking books. The Camino Portuguese coastal is 50% on footpaths and 50% on the quiet laneway. But no busy traffic of any sort.

What to bring on the Portugues Coastal Route

The trail is not very different from the other Caminos. For more information, please download our free Camino packing guide.

Although the pilgrimage from Portugal to Santiago is assumed to have already been in existence in the Late Middle Ages, it became even more popular after the country gained its independence in the mid-12th century. From that time on, the veneration of Saint James and the pilgrimage to Santiago de Compostela, considered to be one of the hallmarks of the identity of European culture, had gained great popularity in Lusitanian lands.

For centuries, the Portuguese participated enthusiastically in this collective Camino experience, with the support of monarchs, nobility, and high clergy. From the 12th century up until the present day, much of Portugal’s road network has seen the comings and goings of pilgrims heading from towns and cities all over the country – Lisbon, Santarém, Coimbra, Porto, Braga, Chaves… to Santiago de Compostela.

This route is the direct descendent of the major Roman roads that formed the backbone of the Roman Gallaecia and continued to be in use for many centuries, such as Via XIX. Built-in the 1st century AD under Emperor Augustus, it was known in classical works as the Itinerary of Antonino, established at the beginning of the 3rd century AD. This is proof of the vitality of this route from very early times.

Today’s modern road network has affected the Portuguese Camino. At times, pilgrims must forget the dirt paths and stone-paved ways to walk along the verge of the N-550 road between Vigo and A Coruña. However, new alternative routes are being created by devoted pilgrim associations and local community groups. Despite this drawback, the Portuguese Camino offers an undisputed wealth of monumental and natural heritage.

One of the hallmarks of the pilgrimage to Santiago is the warm reception given to pilgrims along the way and the Portuguese Camino is no exception. This practice was started in the Middle Ages by monks and clergymen serving the hospitals founded by monarchs and the nobility. This welcoming lay tradition is kept alive today by the locals along the way. Bon Caminho! is often heard and wished to Camino pilgrims across Portugal.

Read more on our Camino Portugues Coastal articles on our blog.