Meadhbh Monahan, journalist with the Impartial Reporter, recently walked the Camino de Santiago from Sarria to Santiago de Compostela with CaminoWays.com. Here’s an article written about her experience on the Camino with her cousin Clara. 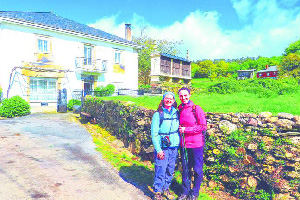 Why are you doing this arduous, tortuous journey?” That is one of the most memorable questions I got asked while walking the Camino de Santiago (‘The Way of St. James’).

We were half-way into our 120 kilometre walk and this Cavan man was struggling. So was I. But the Camino is full of surprises, and when I met that same pilgrim at the end of his journey, he was a changed man, full of positivity and peace.

The Camino de Santiago is a series of ancient pilgrimage routes that begin in various parts of Europe and make their way through stunning landscape to the Spanish World Heritage city of Santiago de Compestella (in Galicia, north-western Spain).

Since the early middle ages, pilgrims have made their way on foot from their front door to the Catedral de Santiago de Compostela. Here, legend has it that the remains of the apostle, Saint James, are buried.

Various guide books suggest that you should differentiate the Camino from a ‘walking holiday’ because it traditionally attracts walkers who have a ‘spiritual’ or religious purpose. They also refer to the walkers/hikers as ‘pilgrims’.

Not sure what to think of this, or what to expect, I decided to walk the final stage of ‘The French Way’ with my cousin.

The French Way is the most popular route on the Camino, attracting more and more visitors each year. It featured in the 2010 American drama film ‘The Way’ directed, produced and written by Emilio Estevez, starring his father Martin Sheen. Its full length is 800 kilometres, beginning in the Pyrenees Mountains, with 35 stages (roughly 20-30km each). It would take at least one month to walk it (more, when you factor in days off for rest). With only one week free, this most popular route suited us because we wanted to finish in Santiago, where you can pick up a credencial – a pilgrim passport issued by the cathedral authorities.

We travelled in the last week of April when it was bright and breezy but wet at times. The weather can be quite similar to Ireland, but gets very hot during the summer months. Some people who began in the Pyrenees had trecked through snow. In terms of visitor numbers, it was beginning to get busy when we were there. July and August is described as “bedlam”.

We booked through CaminoWays.com and flew to Santiago de Compestella with Aer Lingus from Dublin.

We chose the easier option of pre-booking hotels (bed, breakfast and dinner) and having our luggage sent forward, so that it was waiting when we arrived at each new hotel. The more difficult but cheaper option is to carry your rucksack with all your belongings and stay in an albergue (hostel) which are dotted along the way. You cannot book these in advance so it is first-come, first-served. We wanted the security of knowing exactly where we would lay our heads each night. We knew we had made the right choice when we saw the horror on pilgrims’ faces as they were turned away and had to continue hobbling (literally), not knowing how far they would have to go to find a bed.

Depending on the time of year, essentials include a good, worn-in pair of walking boots or sturdy walking shoes; good quality hiking socks (always wear two pairs of socks which will rub off each other, rather than your feet); a raincoat and a poncho; a hiking pole (really helpful going downhill); a hat; blister plasters; water; biscuits/fruit; and a good travel companion. It is recommended that you travel alone, allowing more time for contemplation, but I felt that moral support and a bit of fun was a real help when I was not able to take one more step.

I brought a book for the evenings, but preferred to write or sleep – usually the second my head hit the pillow! The TVs were not switched on once. ‘A Pilgrim’s Guide to the Camino de Santiago’ by John Brierley is a popular and very useful guidebook.

We walked for five days, rested on the sixth day and flew home on the seventh day. Our journey began in Sarria and we walked to Portomarin – Palas de Rei – Arzúa – Amenal – Santiago de Compostela. The third day (28km) was the most difficult. Our fellow pilgrims were Americans, New Zealanders, Japanese, Italians, Germans, English and Irish.

Some choose to cycle the Camino, or do it on horseback.

Very similar to Ireland from the 1950s, the route meandered through stone villages and farm yards with the smells of hay, grass and cow dung in the air. We climbed mountainous paths and walked through shady Eucalyptus forests. We saw women, wearing old-style house coats and head scarves, working in the fields and gardens (I don’t know where all the men were!) Every local we met wished us ‘Buen Camino’ (which means ‘Good Way’). This was also the common greeting among pilgrims and was a really good way of spurring each other on.

The route is marked with yellow arrows and yellow conch shells (the symbol of the Camino). Every 10km has a stone way marking, telling you how far you have to go.

Once you set off each morning, it is nice to know that the only worry that day is putting one foot in front of the other. By focusing on this seemingly easy task, you can work through any worries or issues that have been rattling around in your head. I found it interesting to see who and what would pop into my head each day.

There are lots of little cafes dotted along the French Way (there are not so many on the quieter routes). We often stopped for “dos Café con leche” – we were on ‘holiday’ after all! It was a great energy boost and a chance to compare aches and pains with fellow pilgrims.

On our final walking day, we decided to leave before dawn in order to make it to the city in time for Mass at noon (as the ancient pilgrims used to). A five hour walk in the driving rain was made easier with having a time-limit and having the final destination in sight. The feeling of achievement, mingled with sadness at leaving the peacefulness Camino, made for an emotional experience in the Cathedral. It was lovely to spot our various friends arriving in through the ancient doors, looking as wet, tired but happy as we were.

A pleasant sixth day was spent pottering around the small city, shopping and visiting the museums and tapas bars. A few more ‘rest’ days at the end of your walk may be advisable. I felt that the transition from the peace, tranquillity and contemplativeness of life on the road back into ‘normal’ life happened too quickly.

All-in-all, walking the Camino is a wonderful and uniquely personal experience and one not to be undertaken lightly. Despite the inevitable sore legs and feet, I know that I will return one day.

*This article was originally published by The Impartial Reporter on:

*For information about the Camino de Santiago and/or to book your Camino holiday, contact our travel specialists