On his second Camino adventure, Chef Paul Flynn tackles the Camino del Norte from Bilbao with his brother Deckie.

I’m with my brother this time. There’s me plump and wobbly, he’s a marathon running vegetarian 5 years older than me but sickeningly fitter.

I delusionally console myself that my mane of silver hair compensates for the shambles that is my body.

I found it very hard to choose which section to do this time. Vigo to Santiago last year was a joy. I’ve become addicted to the very idea of the Camino and often find myself drifting back to the memories of that wonderful trip I did from Vigo to Santiago.

Great Food of course is vital in any trip that I do but also a huge factor in where to go this time was based on the wonderful film ‘ The Camino Voyage’. It told the inspiring story of men that rowed from Dingle to A Corūna and then on to Santiago. Their Currach skirted the north coast of Cantabria and I decided to do that too. 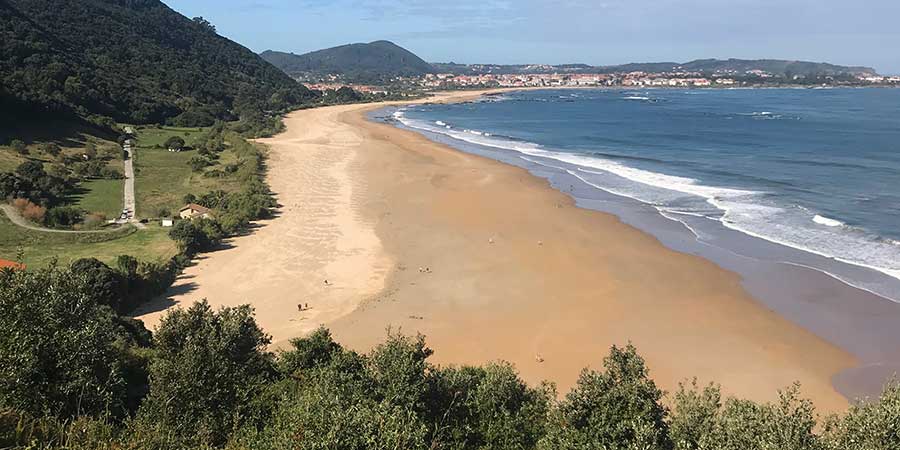 Bilbao at first was misty and gritty but then opened up into cosmopolitan brilliance.

The Guggenheim shimmered in the October sunlight, we discovered the city at a gentle pace.

We could of course have chosen to walk to Portugalete but we cheated and went the short distance by train. The town was a dignified delight, the unique cablecar over the bridge heightened our sense of anticipation. A plush hotel lulled us into a sense of false security for the imminent 29k the next day.

The walk to Castro Urdiales was a thing of beauty.

The day was fine, the temperature perfect and the mood was good despite one too many GnTs the night before. The coastal walk was all I hoped it would be, a peaceful path that wound around the cliffs.

Castro soon came into view like a glittering prize but it wasn’t quite so easy to get to. The path filtered off into a park where family’s roasted peppers over barbecues, it was my imagined and true smell of Spain. Soon came the road, it was the jolt of realism that was always going to come. It was different, more functional but it got us to the town in the end just before the rain.

We didn’t see much of Castro, it was too wet but I won’t be forgetting the Arròs Negre and the baked Turbot we had for dinner anytime soon.

The waiter proudly told me I should have a Cantabrian Reisling with it, I didn’t care that the rain was pounding off the window anymore. I was tired, we had a couple of late nights, catching up and listening to music, a shared love. Was my Bluetooth speaker a blessing or a curse I was beginning to wonder.

We were heading off to Laredo. Pastoral fields and contented cattle lined our path, the gentle bonging of their bells eased our way. It started to rain and the conditions changed, the walk was becoming a little bit more challenging. I am not fleet of foot, my brother Deckie is, I was drifting from him in the slippery surface. We hit the road again, the rain stopped.

We had to cross an estuary from Islares to the other side, as we thumped along the road it was frustratingly close but we had no choice but to follow the river to the turn in the road, the crossing, and the other side, it was a good hour walk.

We decided on the alternative coastal route, a decision we came to regret.

The arrows all but disappeared and so did my confidence. It wasn’t a cliff at all according to my brother, he galloped ahead like a goat, I scrambled and cracked, we had to turn back and retrace our steps over many kilometers to find an alternative route. It was a dispiriting few hours, I left my dignity on that cliff and came away with vertigo in its place. It was a long and arduous day I was sore, tired, and low.

Throughout my career, I’ve always told myself to put a bad day behind and start afresh with the next.

The next day restored my faith, Laredo to Noja was 14k of loveliness, a short ferry ride to the other side of the estuary in the slight morning chill, there were some threatening clouds but then the day made up its mind and the sun shone. We stopped halfway for a break and found ourselves chatting to a sprightly eighty-year-old Englishwoman whose husband came from Dungarvan, it’s a small world, we were all thrilled.

A more dignified scramble over a hill revealed a magnificent beach and Noja in the distance, I stripped off, a little. I felt like Robinson Crusoe, it felt good. I finally got my Almejas al Ajillo. I had some Albariño then some beer while Deckie went for a run back up the beach from where we came. I had no guilt, this is what I came to Spain for. 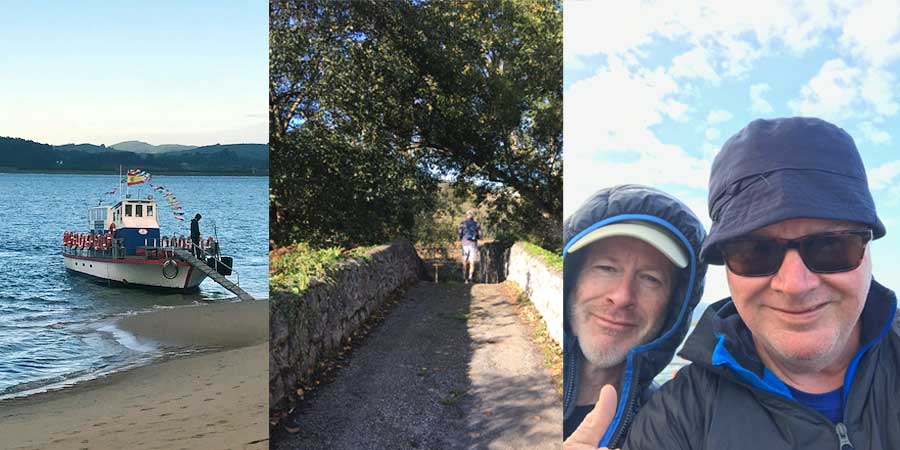 We stayed in a simple guesthouse with a lovely family that night just outside Noja, he gave us a lift to our starting point. Our last day was our best. 27k is not insignificant, it all depended on the terrain or course but the day was sunny and we were well-rested. The countryside was bucolic, it was like Ireland but somehow the light was different. By now I had a few blisters but I was determined to tough it out, there were enough stories of me buckling under pressure as it was, there couldn’t be anymore.

The walk was perfect, quiet country roads punctuated by the odd cyclist. We chatted with a young bronzed Swiss couple who were cycling gently along the Northern coast without a care in the world. I admired and envied them in equal measure.

A brow of a hill revealed a glittering Santander, it’s always a thrill to finally see your destination after a long walk but equally, we have learned that it is never as close as you think and you never know what challenge is around the corner. The path took us around the coast, so many beaches, all so beautiful.

Being this far away from Santiago (540k) the markings can be frequently infrequent, it can be frustrating. A little trace of an arrow settles you, gives you confidence, strengthens your steps. You diminish when you are unsure of your direction. It was a long walk but when we finally saw the ferry the greatest feeling was a relief.

29k two days in a row and 27 another was a bit of a stretch for me, I should have trained more of course but I survived. It’s lunchtime on the last day, I’m writing this in a cafe in Santander surrounded by the scent of Spain. I’m about to order Fabada and Hake in green sauce, I can hear Cantabrian pipes in the background and I have wine. Santander is a fabulous prosperous city in the most amazing location. It’s surrounded by pristine beaches and dotted with surf schools. There is an easiness to life here.

Last night we sat in the square in the bars amongst the crowd, we observed and absorbed. The children played football whilst the parents chatted, the noise was sweetly deafening. I had a great trip with my brother, it was a treasured journey. Not ending in Santiago is less spiritual I suppose but none the less exciting. We will come back and if it’s not together we will always have had this week. Buen Camino!

Highs
The beaches, the seafood.
Menus del dia.
The sun in October.

Lows
Discovering that I really don’t like heights at a fairly crucial moment.
Not speaking Spanish, again!
Not being as fit as i should be.

Tips
Do a little training.
Learn a little Spanish.
Be inquisitive about local food, it will be simple and delicious

Chef Paul Flynn, from The Tannery, walked the Camino del Norte from Bilbao to Santander with CaminoWays.com.

For more information about this trip, the Camino de Santiago routes or to book your trip, contact our travel specialist