Chef Paul Flynn: My week on the Camino Portugues

Chef Paul Flynn hung up his apron and headed to the Camino with childhood friend Liam for a  week of walking, and eating. He tells us why he might just be addicted to the Camino. 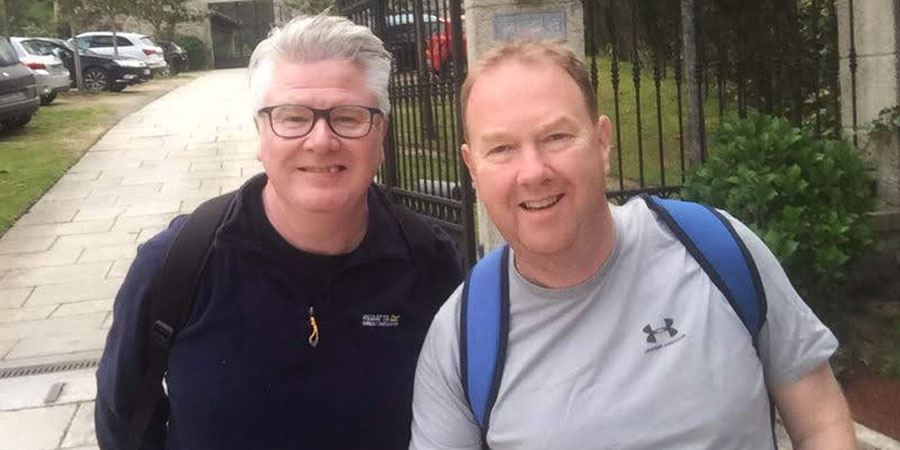 Like many others my awareness of the Camino started with the film ‘The Way’. Anything with Martin Sheen in it was compulsory for me. President Jed Bartlett was a reassuring intellectual presence in the Whitehouse, it was totally believable to me that he would walk his troubles away on the Camino.

I did no training, I had planned to but time just slipped away.

There was one day Crocker and I walked from Kilmacthomas to Dungarvan along a stretch of the Waterford Greenway about 23k. It’s a nice easy walk along a smooth surface with no challenging hills.

So why that night did my body feel as if I had been set upon and clobbered mercilessly. I was marginally better the next day but I now was cursing my lack of preparation for the Camino. I would have to do this over 6 consecutive days over much more challenging terrain, I was worried. 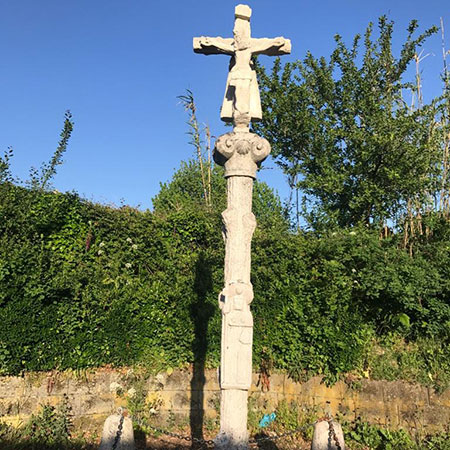 I decided on the Portuguese Camino because it seemed that little bit quieter than the French Way, I’d seen the BBC program with the mixed bag of Celebs and at times the crowds resembled an unremitting throng, I didn’t want that many people to see my pain.

I was travelling with an old friend Liam (Crocker), his preparation was better than mine but he never divulged his training regimen, leaving me suspicious and yet more anxious.

We flew into Santiago airport and taxied the 100k or so to Vigo nervously taking note of the distance and the rather intimidating mountainous landscape. We have to walk all the way back to that airport I ominously commented to Crocker , he simply replied Hmmmmmmm.

We were staying in hotels with our bags efficiently transferred each day. I’m sorry I’m too old and spoiled to do hostel , plus I’m told they have a curfew, what’s that all about? They don’t call me Paul ‘free range’ Flynn for nothing.

We set off from Vigo taking some time to find our way, in truth we discovered pretty quickly that it’s almost impossible to get lost between the yellow arrows and the numerous markers.

It was good the first day was an easy one only 14k to Redondela along a glorious costal path that left us in no doubt that we were going to have a magnificently different week. Food is my life and Crocker to be fair plunged into that life with enthusiasm.

The first sign that I was in for a week of fabulous food was in the first cafe we hit in Redondela. While sipping a triumphant post walk beer a little tranche of turbot in a glowing puddle of saffron stock was placed in front of us.

“Not believing my eyes I prodded it, it tasted of Spain, and it was free!”

Not believing my eyes I prodded it, it tasted of Spain, and it was free! If the food was going to be as good as this the week was going to be even better than I anticipated. 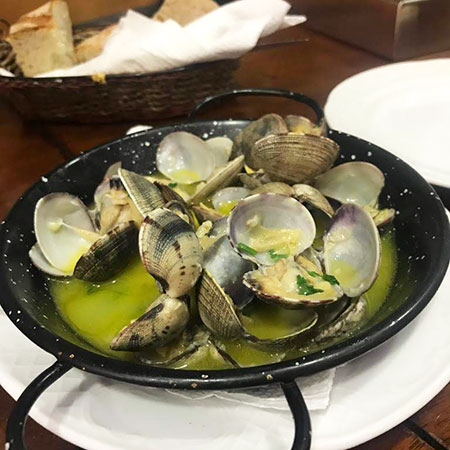 Our hotel was outside town, on the way to get a taxi, my nose led me to a dimly lit bar, I had something on my mind, I spotted Almejas, those sweet little clams they cook with white wine, garlic and parsley. Of course I had to order some Albariño to do them justice.

Crocker watched me feed, wide eyed like a man who was having his last meal. I would get to see the same look many times. It was a very encouraging first day.

The next day proved to be much more difficult, 20k to Pontevedra 2/12 hours uphill until the terrain plateaued, Crocker powered on steadily but I struggled, huffing and puffing to the top.

It was not the easy walk of the previous day for sure but we eventually got to our hotel and threw ourselves on the beds.

Discovering Pontevedra was a joy, a bustling beautiful town, rich in history and the birthplace of Christoper Columbus. It came alive in the evening sunshine as we sat in the bustling square realising that every day on this journey was going to be different.

We quickly settled on a routine, up at 7, a good breakfast but not too big, back on the road no later than 8.15, my legs were holding up well having recovered from the previous tough day.

We were heading 22k to Caldas de Reis, we chatted when we wanted, stopped when we felt the need, I even succumbed into a routine of an early beer. The landscape changed every day, the cultivation was remarkable, the heroes of our trip were the Galician Grannies that endlessly toiled in their immaculate plots.

“The heroes of our trip were the Galician Grannies that endlessly toiled in their immaculate plots.”

It was brilliantly green but in a completely different way to Ireland. Every plot burst with vegetables of every variety nestled beside another pristine virgin plot waiting to be planted. We took it all in and walked on, our legs were adapting, perhaps with the help of the few stretches in the morning.

That evening we were in for the treat of a lifetime. Just outside Caldas de Reis we came to our guesthouse Torre do Rio, a renovated mill on spectacular grounds. The swimming pool was fed by the powerful stream that powered the wheel for the mill. 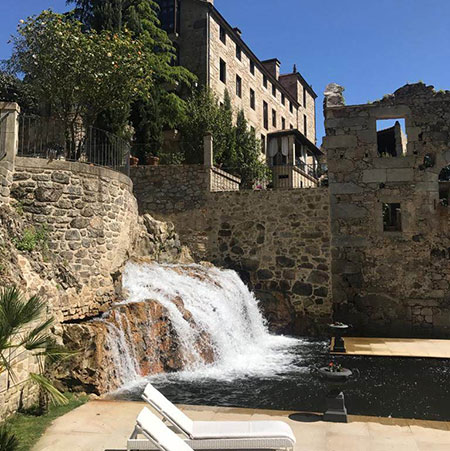 The rooms were not ones to be shared with your best friend and over a impressive dinner I told Crocker that I loved him but I wish he was a woman…. he blushed but understood .
We have known each other after all since we were 4.

The next day we trekked to Padron 19k with intermittent sunshine, we were wondering was the weather changing. I found the last few kilometres interminable but once again food came to the rescue, we came upon the winding down of the most inspiring of markets. The abundance of fish just made me want to cook.

Contacts in Martin Codax wine were giving me restaurant tips all along the way, I’m blaming their kindness and my greed for possibly being the only man ever to put on weight in the Camino. We found Flavia, a simple restaurant with rooms with a stunning seafood menu.

Crocker watched wide eyed as I noisily slurped the heads of the grilled prawns, more Turbot and chilled cheap local wine. We were subjected to friendly taunting by 3 elderly Canadian ladies who laughed at our efforts, they had walked from Lisbon with full backpacks and intended to walk to Finisterre once they reached Santiago.

“You look like the types that get their backpacks transferred from hotel to hotel.” They were still laughing us as we left the restaurant. We slept well that night.

Last day 25k to Santiago, the sky was grey, it was going to rain but we were prepared with our newly purchased full body raincoats, and we were determined.

In truth it’s always about the terrain and the weather, it rained in spurts but mostly held off till we got to the outskirts of Santiago, we ducked into a cafe for a little beer and the closer we got to the Cathedral the sun appeared again as if by Providence. 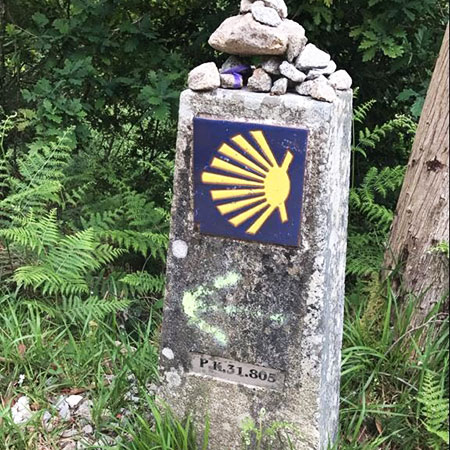 I’m not remotely religious but entering the square was spiritual, we hugged , there were no rows along the way, we just fell into our own rhythm.

“There were no rows along the way, we just fell into our own rhythm.”

We entered the Cathedral, it was magical. It’s hard to comprehend for how long and how many people have made this pilgrimage over time. Crocker lingered longer inside than I as he still retains his faith. I sat on the well worn steps outside, we went for one more long memorable lunch and went back to the hotel for a well earned snooze.

That night turned out to be a complete surprise when we came upon a very flamboyant and boisterous Gay bar full of highly excited Drag Queens, it was the final of the Eurovision and boy were they excited. It was a memorable end to a brilliantly addictive week.

I will be back asap with My Wife and hopefully with Crocker again one day. I know he’s got the bug too. 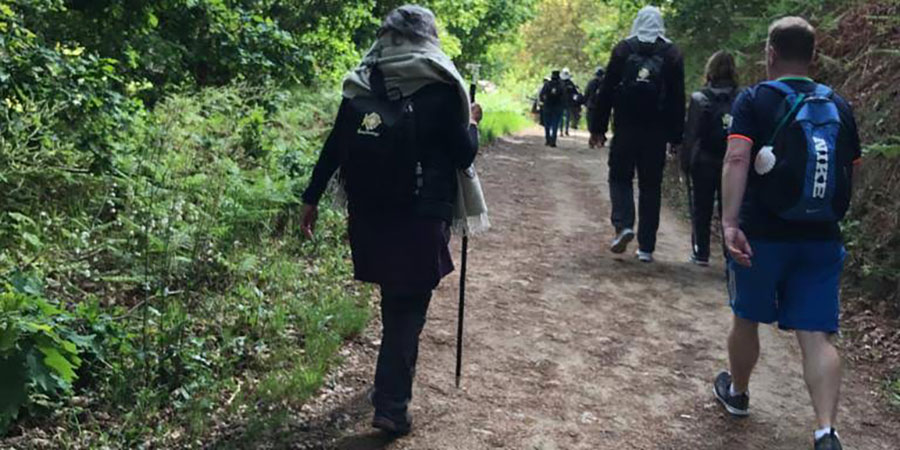 Highs: Everything ,particularly the Camino food and wine .

#don’t stop off at the first cafe once you’ve reached the town.

#Don’t say Delicious all the time.

Chef Paul Flynn is the owner of The Tannery Restaurant and cookery school in Dungarvan, Co. Waterford. He has written many cook books and regularly appears in many RTE TV shows such as Today, Lords & Ladles.

Paul and his friend Liam walked the last stretch of the Portuguese Coastal Camino from Vigo to Santiago de Compostela with CaminoWays.com.

For more information about this Camino route or to book your trip, contact our travel specialists