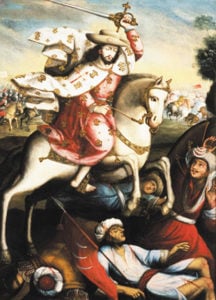 The history of the pilgrimage to Santiago de Compostela stretches back more than 1000 years to the discovery of the body of Saint James during the reign of King Alfonso II (792-842). Saint James was already believed to have been the great evangelist of Spain and for many hundreds of years there had been a scholarly and literary tradition supporting this belief. The discovery of the relics of Saint James then became a focal point for pilgrims. Though a few pilgrims to Santiago are recorded in the 10th century, and many more in the 11th, it was in the early 12th century, and particularly under the energetic promotion of  Archbishop Diego Gelmírez (1100-1140), that Santiago came to rank with Rome and Jerusalem as one of the great destinations of medieval pilgrimage.The first Cathedral was built over the site of the tomb, and gradually houses were established, for example by monks from Cluny in Burgundy and from Aurillac in Cantal, along the developing pilgrimage route.

The 12th and 13th centuries are considered to have been the golden age of the pilgrimage to Santiago. Subsequently the years of the Renaissance and Reformation in Europe led to a decrease in the number of pilgrims. However pilgrims still made their way to Santiago throughout the centuries. In 1884, following academic and medical research, Pope Leon XIII issued the Bull, Deus Omnipotens, which proclaimed that the relics in Santiago were those of Saint James. This is recognised as the start of the modern development of the pilgrimage.

It was thought that in the 20th Century the growth of mechanised means of transport such as cars and airplanes might lead to a reduction in the number of pilgrims travelling to Santiago on foot or on horseback. This was not to be the case and in the last 30 years in particular there has been a huge growth in interest and in the number of pilgrims travelling on foot, on horseback or by bicycle. Pilgrims were encouraged by the visits by Pope John Paul II in 1982 and in 1989 when World Youth Day was held in Santiago. The number of pilgrims continues to grow. In 1985 1,245 pilgrims arrived in Santiago. In the 2010 Holy Year 272,703 pilgrims qualified for the Compostela.