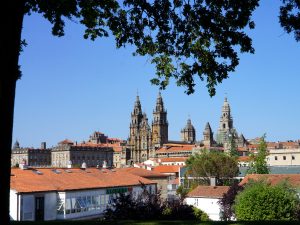 I’M standing inside the monumental Cathedral of Santiago de Compostela, marvelling at its Romanesque interior, when I suddenly find myself surrounded by a group of pilgrims – the staffs and sandals are a giveaway – who drop to their knees and begin chanting in French. I haven’t an inkling what they are singing about but the sound is so beautiful and the performers so patently sincere that, incorrigible heathen though I am, I find a lump rising in my throat and a blanket of goose-bumps spreading along my arms.

The group, as I later discover, has spent several gruelling months trekking more that 1,000km from Paris to this holy of holies in the heart of the Galician capital. The reason for their expedition: to pay homage at the shrine of the apostle St James. Legend has it that the body of the country’s patron saint was ferried from Jerusalem to Spain following his execution, but the exact location remained lost until 813 when a shepherd was led to a burial site in the Northwest of the country by a beacon of divine light; the enterprising local bishop – absence of carbon dating notwithstanding – declared the remains discovered there were those of St James and, under the aegis of King Alfonso II, a cathedral was built on that spot in his honour. In the Middle Ages, Santiago became one of the world’s leading pilgrimage sites and remains so to this day, albeit with countless non-believers and outdoorsy types belatedly getting in on the act. 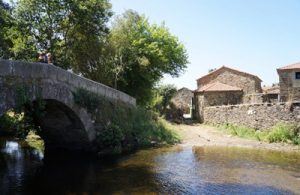 Those who tackle the Camino for religious reasons tend to travel with a special ‘passport’, which is stamped at regular intervals in hostels along the way and ensures its holder will receive a certificate of completion known as the ‘compostela’. However, my aforementioned French pals – or suckers as I like to call them – have covered a truly extravagant distance, well in excess of the 100km minimum required to attain this prized document. By contrast, we’ve just hobbled into Santiago after completing the final, more economical stretch of the ‘French way’, beginning in Sarria in the nearby region of Lugo (a distance that qualifie

While self-respecting pilgrims, or ‘peregrinos’, stay in frill-free hostels, the idea of communal sleeping quarters, complete with wheezing roommates and smelly-sock fug, is a bridge too far for this admittedly wussy adventurer. As such, we’ve travelled with excellent Dublin-based walking holiday specialists Camino Ways, who not only arrange accommodation in a selection of very pleasant three-star hotels en route but ensure our luggage is transported – the shame! – from one destination to the next.s us for a compostela, with just kilometres to spare).

Expect to be mocked ferociously should you choose to share this information with self-righteous, bunion-sporting fellow travellers who’ve hauled their kit about for weeks or months on end. Following a particularly peaceful night’s sleep in a lovely modern hotel in Sarria, our walking adventure begins when we make our way up the town’s pretty, sun-dappled main street, Calle Mayor. From here we ford a picture-postcard little bridge through a landscape so verdant it feels uncannily reminiscent of Co. Wicklow; there’s a good reason why Galicia, with its two metres of annual rainfall, is often referred to as ‘Green Spain’. 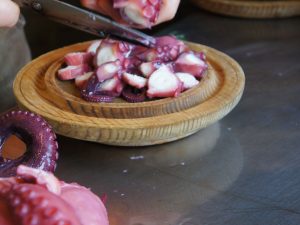 Not even a nasty encounter with an aggressive ostrich – the ‘no-petting’ sign caught my eye only after I’d attempted to snuggle – can detract from the new-found sense of wellbeing I experience as we near the 15km mark and descend into a valley of coniferous woodland; a white-knuckle walk over a wind-swept bridge marks the final stage of the first leg as we make our way to the well-appointed Pousada hotel in sleepy Portomarín. Following a restorative swim in the outdoor pool, we’re ready to explore the town before sipping crisp San Miguels in the main square as the sun sets over the town’s Templar Church.

We continue in a similar vein for four more days, wending our way through breathtakingly beautiful oak forests and meadows, with well earned pit stops in sleepy hamlets en route, where we alternate between refreshing local beers and dense cortados (the Spanish version of caffè macchiato).

Galician seafood is invariably delicious but the region’s signature dish, pulpo a feira (boiled octopus), which we gorge on in our halfway point, Melide, is a particular highlight; it mightn’t sound terribly appetising but the white meat, gussied up with a little olive oil and a sprinkling of pimenton (a sweet Spanish variant of paprika), is sublime. By contrast, the rubbery pigs’ ears – I’m sure I saw them wiggle on the plate – we try in a wine-fuelled, devil-may-care moment in Santiago have since become a motif in my nightmares.
Santiago is the Catholic Church’s holiest site outside the Vatican but anyone expecting a reverential atmosphere couldn’t be more wrong. It’s a gem of a city, teeming not only with Christian wayfarers but pleasure-seekers taking advantage of its excellent, affordably priced restaurants and lively bar scene. 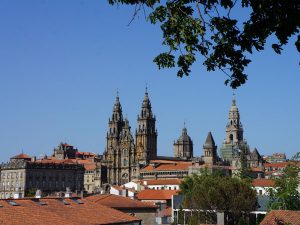 We stay in the atmospheric, 16th-century monastery Hospedería San Martín Pinario – its central location means some of the city’s best eateries and watering holes, most notably on the tapas-mecca Rúa do Franco, are in spitting distance. Two days of overindulgence later and we’re quite possibly the only pilgrims who’ve ever finished the Camino weighing significantly more than when we started.

A classic seven-day Camino de Santiago experience with CaminoWays.com covering the last 100km of the French Way to Santiago de Compostela, starting in the town of Sarria, in Galicia, starts at €565pp sharing (high season) for six nights. Self-guided packages include accommodation, half-board meals and luggage transfers. Additional nights and hotel upgrades can also be arranged. See www.
caminoways.com, or tel: (01) 525 2886. Fly directly from Dublin to Santiago with Aer Lingus

*For more information about Camino food, the Camino de Santiago or to book your Camino walk, contact our travel specialists