For centuries, pilgrims from Northern shores docked in the harbour of A Coruña on their way to Santiago de Compostela. Their Camino de Santiago journey had taken them across the seas but they would still have 75kms to walk before reaching the city of St James, the end of their pilgrimage.

Today, A Coruña is one of the starting points of the Camino Ingles route and also what is known as the Celtic Camino. Fashionistas will know it as the hometown of Zara and soccer fans will remember its local team Deportivo, but it is the waves of the Atlantic Ocean that have shaped A Coruña’s charm and character. The city’s port has seen the transit and flow for hundreds of years not only of pilgrims but also invaders, emigrants on their way to America, trade and commerce…

If you are starting your Camino from A Coruña, these are some of the places you shouldn’t miss in this fabulous and lively coastal city.

If there is one single place you should visit in A Coruña that would be the Torre de Hercules, Hercules Tower, symbol of the city and its most iconic landmark. This impressive Roman lighthouse has been guiding ships into the city’s harbour for over 2000 years.

Listed as a World Heritage site, the tower was built on a headland by the Romans back in the 1st century and is still used for marine signalling, making it the only fully preserved Roman lighthouse in operation in the world.

Since the Middle Ages, the tower has also been associated to many legends and myths. One of the most famous ones would be the story of Ith and Breog, featured in the Book of Invasions, written by Irish monks in the 11th century. According to the legend, chieftain Breogan founded the city and built the tower. It was from this tower that one of his sons, Ith, spotted Ireland and decided he would travel the seas to conquer this new land. Ith would be killed in Ireland and brought back to A Coruña. However, his brother Mil would then continue his pursuit and finally successfully conquer Ireland, giving name to the settlers known as the Milesians (the sons of Mil).

The city is surrounded by the Atlantic Ocean and the 13km-long promenade, Paseo Maritimo, is where you’ll find all the locals strolling, cycling or running on a sunny day. If it’s sunny AND hot, then it’s time to chill or go for a swim at one of the city’s sandy beaches such as Orzan and Riazor. 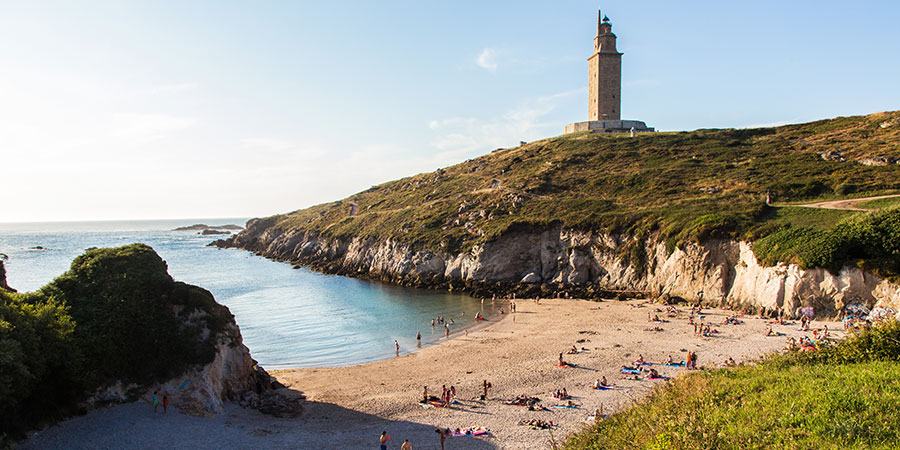 A stroll in the traffic-free Old Town is another must. It is here where pilgrims will find the city’s St James Church, a classic Romanesque temple that has welcomed Camino pilgrims for hundreds of year. It is also the second oldest monument in the city, after the Hercules Tower.

Without leaving the Old Town, every visitor should head to the city’s main square to pay its respects to Maria Pita, the city’s heroine. The city’s square, Praza de Maria Pita, is named after her and you’ll find a statue dedicated to brave Maria who defended the city from the attacks of Sir Francis Drake. If you’d like to know more about this fascinating character, you can visit her home place, now a museum, in the Rua Herrerias 28. 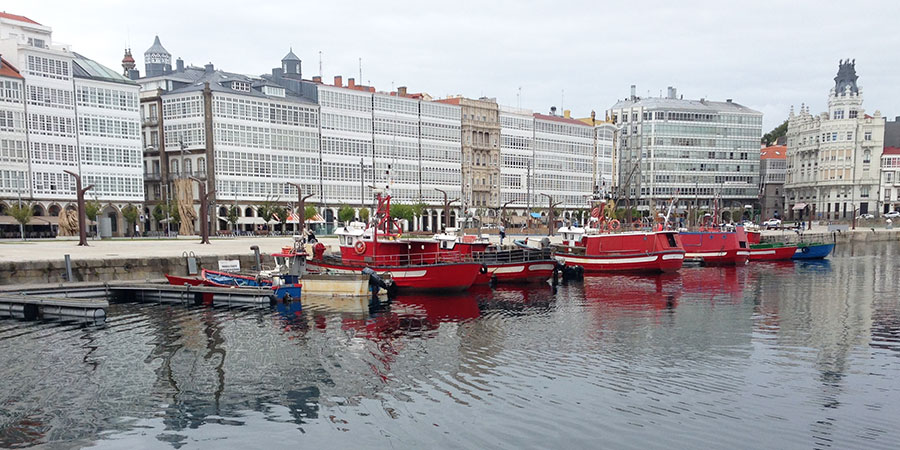 Just a hundred metres from Praza de Maria Pita, you’ll find yourself back at the harbour where you’ll have the opportunity to appreciate the unique architecture of the city, particularly the seafront houses lined with their white balconies known as ‘galerias’, a classic feature in coastal towns and cities in Galicia.

And after a day of exploring and sightseeing, it’s time for some food. The city has a pletora of restaurants as well as small ‘tascas’ where you can sample a wide array of classic tapas such as squid, chorizo, croquetas and tortilla. One of the classics is the miniscule La Bombilla. Did you know A Coruña is also the birthplace of Estrella Galicia?

If you have time to spare before setting off, we highly recommend spending a couple of days in this wonderful city by the Atlantic. With plenty of museums, festivals, parks and countless food sports worth investigating there is plenty to do and see in A Coruña.

For more information about the Camino Ingles, Celtic Camino or to book your trip, contact our travel specialists