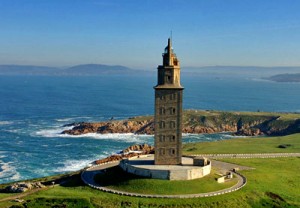 The port city of A Coruña, in North West Galicia, is one of the traditional starting points of the English Way to Santiago de Compostela. The English Way was one of the routes followed by pilgrims from Northern Europe who used to arrive to the ports of Coruña or neighbouring Ferrol and start their walk to Santiago there. The city’s most emblematic monument is, without a doubt, the Tower of Hercules, overlooking the Atlantic Ocean and considered to be the oldest working lighthouse in the world.

This impressive Roman lighthouse and UNESCO World Heritage Site has a privileged position on a headland and it is linked to many myths and stories. One of the most famous legends is included in the ‘Book of Invasions’ (Lebor Gabála), written by Irish monks in the 11th century. According to the legend, King Breogán (who is mentioned in the Galician national anthem as Galicia’s founder) founded the city and built here a huge tower. On a clear night, one of his sons, Ith, could see a distant green land from the top of the tower and decided to sail north to explore that unknown land. This green land would be Ireland.

Unfortunately, the locals didn’t take to Ith and his invasion plans very well; as a result Ith was murdered and sent back to Coruña. To avenge the death of his brother, Mil (another son of Breogán) decided to take a big army and sail to Ireland to conquer this land, once and for all.

The descendants of Mil and his army (Milesians) are said to have stayed in Ireland, becoming the Celtic ancestors of the Irish people.

If you are walking the English Way to Santiago from Coruña, the Tower of Hercules is a must-see. As you walk to the tower, you will find a stone statue of the mighty King Breogán. The Tower’s visitor centre opens seven days a week so you can learn more about the lighthouse and walk to the very top. If you are wondering if Ith could really see the coast of Ireland from up there on a clear day, this is your chance!

For more information about any of the Camino de Santiago trails please contact one of our travel specialists.