Burgos, on the Camino Frances,  is situated at the edge of the central plateau and is the capital of the province of the same name, in the autonomous community of Castile and León. The city forms the principal crossway of north Spain with the Camino de Santiago, which goes throughout all the city, parallel to the Arlanzón river.

You can also start the Camino from Burgos, by going to the Camino Frances full Route, and customising the starting point. 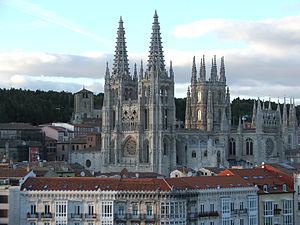 It has a good variety of historic landmarks, with the most notable of these being the Cathedral of Burgos, Las Huelgas Reales Monastery and the Cartuja of Miraflores. The Gothic Cathedral of Burgos which was begun in 1221 is a UNESCO World Heritage Site.

Burgos has many ancient churches and convents and among the other interesting architectural structures, is the famous gateway of Santa María in the walls of the city, which was erected for the first entrance of Emperor Charles V, and the arch of Fernán González. The province is famous for Queso de Burgos, a white cheese that is soft and buttery (because it is made with whey).

The Weather in Burgos

The City is blessed with a moderate climate, warm in summer and fresh in winter.

Queso de Burgos is the most famous cheese from Burgos, it is a fresh cheese that is possible to conserve without the need for curing for more than 10 days.

The Morcilla de Burgos, a pig’s-blood sausage, is a staple country food famous across the Iberian peninsula. Spiced with onions and herbs its most noticeable content in rice (often mistaken for fat) makes it one of the lightest and healthiest products of its kind. Oral tradition says that it must be “salty, smooth and piquant”. Both products are regularly found all over Spain sliced and skewered on a slice of baguette bread as tapas (small bar-top treats, often served free with drinks).