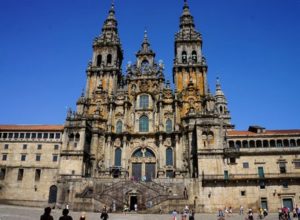 John Murphy kindly sent his beautiful Camino story, told through poetry, to our office this week. In 1999 John was supposed to walk the Camino de Santiago with his close friend Paul. Unfortunately Paul died suddenly before they could embark on their journey. With the wishes of Paul’s wife Ros and as a wonderful tribute to Paul John completed the journey to Santiago, taking Paul’s soul with him. The intimate poem reveals important moments in John and Paul’s friendship. It also teaches us a thing or two about perseverance and hope. The below poem was written during John’s Camino journey and we think that it truly captures the magic of the route.

It is said that the Gods have a twisted mind

So they strike at a time that you’d least suspect
When everything’s good and you never expect
That never again for the rest of your life
Will he look in your eyes or call you his wife.

And so it was with Paul Beck.
For they struck him down when the sun was high
Without even a moment to say good-bye
To those whom he loved too much.

And a cry went up to the Gods on high
As to why, O why, he had to die?
But no answer came.

So we buried him gently beneath the clay
In a glade in a wood that’s not far away.
And there he lies.

But all that glitters is not gold
And all this story is not told
For he and I had planned, another day,
To walk along the Santiago Way.
And now, as his cold body we interred.
I looked upon his tragic wife and heard
Her say to me in a voice sincere and low
Take him with you to Santiago.

O Lord, my very fingers seemed to shake,
My blood ran cold and all my body quake.
For how could I, a sinner and a knave,
Take him to Santiago and our souls to save.
With all my very being full of fear,
I agreed with her and held her very near.

There comes a time in the affairs of man
When, given the choice, he either can
Pick up the yolk from the side of the road,
Straighten the harness and pull the load,
Or turn away his face and never see.
Like in the bible and the Pharisee.

So I sat down that night, just Paul and me,
And he worked out the rule so that we
Could walk together down the long, long road
To where Apostle James has his abode.

The rule was very simple and quite clear.
We’d walk as friends together and appear
As normal pilgrims on our normal way
And take life as it comes day by day.

Our journey to the far distant Santiago de Compostela, in Galecia, at the end of the world, began in the small walled French Pyrenean town of St.Jean Pied de Port.

The dawn was still asleep when we set out
To climb that cordillera to the south.
That huge yet gentle rolling mountain chain
That separates sweet France from torrid Spain.

On the Pyrenees we talked about trees
And of this and of that and of why
And of how men could, if they only would,
Listen to our reasons why.

It was seven hours up and two hours down
And O Lord were we low
When we rounded a bend and there at the end
Stood “El Refugio”.
There were nuns at the door, maybe three or four
And they welcomed us into the light
And they gave us to dine and a glass of wine
And a quiet bed for the night.
And we say and we talked and we had some fun
And when Paul mentioned his aunt, the nun,
Well all their eyes lit up and full of glee,
They kissed their Prodigal son, the VIP.

The dawn was asleep when, in our cells,
Came the sweet dulcet tones of convent bells.
Calling us all together for a pray
That we might live to love another day.

And there in that small church beside the wall
The priest came down and slowly looked at Paul.
Saying, as he held him firmly by the hand,
“You’re a noble man from a noble land”
And then he blessed us all, two by two,
But looking in his eyes I knew he knew.

In Pamplona of the bulls
We ran and ran like fools
To celebrate the Feast of San Fermin.
And the crowd shouted “Ole”
On that lovely sunny day
As we entered in the plaza for a win.

In Burgos of “El Cid”
We manned the walls and did
What every child one day would like to do.
We repelled the Moors’ attack.
At the gates we drove them back.
And we waved our swords and hailed! El Cid Abo!

In La Rioja of the vines
We drank our share of wines
And now and then quite tipsy went to bed.
But before the break of day
Paul would wake and quietly say;
That all in all he still preferred the red.

On the plains of Castille
I began to feel
That I could not carry on or even care.
But Paul reminded me
That before we did agree
That we had a date in far off Finisterre.

In Leon of the lion
I felt at the time that a change over Paul had come.
For he talked of his friends
And of making amends
And of things he had done and not done.

And he took me aside
And in me did confide
Of what he had lost and won.
But what’s done is done
And what’s won is won
And what’s lost is lost and gone forever.

When he spoke of his parents
He spoke with delight
For he kept half the pilgrims awake half the night
Telling them stories concerning them both.
The details of some to relate I’d be loath.

When he spoke of his friends
And of making amends
A twinkle came into his eye.
And after awhile he began to smile
And he said he would tell me why.
“I have lived all my life by the laws of man.”
“I have done by my friends the best that I can”
“There are few amends to make”
And he laughed as he handed me a few pounds.
“Take them down to The Quay and buy a few rounds”
“For safety sake”.

On the 4th October 1999 after a very long trek up to the top of the Sierra Courel mountain chain we reached the village of Cebreiro and, there in front of us, stood Galicia, with its great forests of chestnut and eucalyptus, trees stretching all the way to Santiago de Compostela. It took us eight days to cross Galicia – eight of the most wonderful and beautiful days of my life. We stayed at Triacastela, Somos, Sarria, Portomarin, Palas de Rei, Melide and, finally at El Monte de Gozo. On the morning of the 12th October 1999 we walked the last few kilometres into the city of Santiago. The city has been receiving pilgrims for over one thousand years. The old part of the city has not changed for five hundred of these years. We walked down the Avenida de las Estrelas into the great square in front of the Cathedral. There were people there from all over the world. There was a battalion of Italian soldiers who has walked from Rome, a group of Hungarian gypsies from Budapest, a German band from Bavaria, French monks from Cluny, a Mexican mariachi group, singers from Rio de Janero and La Plata, Indians from Peru and Chili and pilgrims from all of the five continents.

We slowly made our way up the great stairway into the Cathedral. There were over twenty thousand people gathered there. Fortunately, there is a reserved section for those who have made the long journey by foot. Paul and I rested our weary bones and , full of emotion, we opened our hearts to a Missa Cantata Gregoriana, sung by the Bishop of Santiago and eighty monks.

At the end of thise Paul turned to me and said;

“I have loved every moment of all of my life.
“Loved my parents, my sisters, my brother, my wife.
“My children I’d die for” – he said with a smile.
And he hugged me and slowly he walked up the aisle.

And I knew he was going from you and from me.
So I bowed my sad head and I bent my poor knee,
And I prayed that Great God would look down on us three.

And I asked for a sign from under the dome,
That Paul was at peace and was on his way home.
He walked like a prince
Mid the crowd that was there.
Through the rails, past the altar
And on up the stair.
To where there’s a statue of Santiago,
Seated in marble in his portico.

Paul laid his head on his knee for a while.
And I looked and I saw the Apostle smile.

We would like to sincerely thank John F Murphy for writing this most honest and beautiful account of his Camino journey. We hope that this unique perspective of the Camino provides our readers with some time for reflection and enjoyment. If you wish to share your Camino story, poem, image or film with us visit our Camino stories page.