La Rioja is a province of northern Spain and its capital is Logrono. It is located in the middle first part of the Camino Frances, the French Way that passes through the area. This region of Spain is most famous for its production of the world-famous Rioja wines.

The history of Rioja wine reflects a long and varied winemaking tradition in the Spanish region of La Rioja, starting with the first Phoenician settlers in the 11th century BC. As with many of Europe’s most well-known wine regions, the Ancient Romans founded many of the Rioja vineyards. Throughout the Middle Ages, pilgrims to the shrine of St. James at Santiago de Compostela passed through the region and carried back with them the reputation of wines from the area. The phylloxera epidemic of the late 19th century was a major catalyst in the expansion and modernization of the Rioja wine industry, with the devastation of the French wine industry both opening up the French wine market and bringing an influx of French investment into the region. Today, together with Sherry, Rioja is the most internationally-recognized of all Spanish wines. 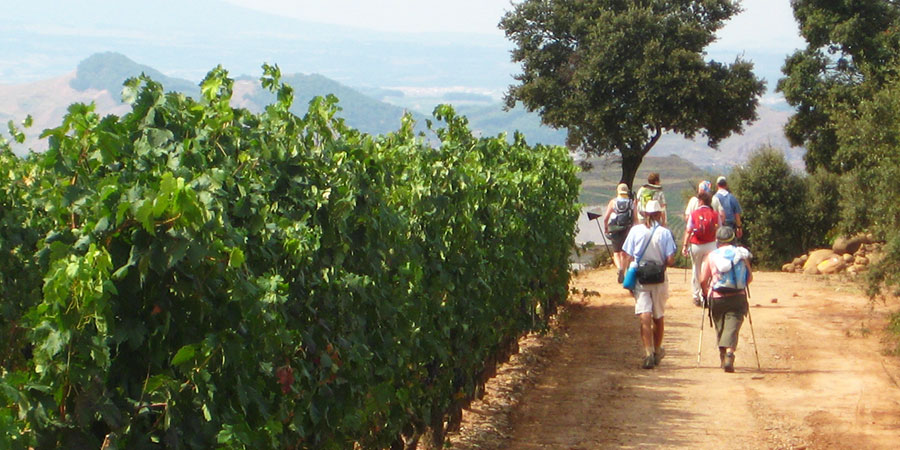 Located south of the Cantabrian Mountains along the Ebro river, La Rioja benefits from a continental climate. The mountains help to isolate the region which has a moderating effect on the climate. They also protect the vineyards from the fierce winds that are typical of northern Spain. The region is also home to the Oja river (Rio Oja), believed to have given the region its name. Most of the region is situated on a plateau, a little more than 1,500 feet (460 m) above sea level.

The three principal regions of La Rioja are Rioja Alavesa, Rioja Alta and Rioja Baja with each area producing its own unique expression of Rioja wine. Most of the territory subjected to the Rioja Protected designation of origin is in the La Rioja region, even though their limits do not coincide exactly. There is a narrow strip in the left bank of the Ebro river lying in the southernmost part of Álava included in the La Rioja wine region, whereas the south-southwestern part of the La Rioja region is not a part of this Protected designation of origin.

A distinct characteristic of Rioja wine is the effect of oak aging. First introduced in the early 18th century by Bordeaux influenced winemakers, the use of oak and the pronounced vanilla flavors in the wines has been a virtual trademark of the region though some modern winemakers are experimenting with making wines less influenced by oak.

Originally French oak was used but as the cost of the barrels increased many bodegas began to buy American oak planks and fashion them into barrels at Spanish cooperages in a style more closely resembling the French method. This included hand splitting the wood, rather than sawing, and allowing the planks time to dry and “season” in the outdoors versus drying in the kiln. In recent times, more bodegas have begun using French oak and many will age wines in both American and French oak for blending purposes.