7 Things to Expect on the Rota Vicentina

The Rota Vicentina Fishermen’s Trail is a magnificent coastal trail in Portugal, taking walkers along the shores of some of the most beautiful and best-preserved coastlines of Southern Europe.  Bordered on the west by the Atlantic Ocean, the route spans the tranquil Portuguese region of Alentejo and along some of the few remaining wiles and undeveloped shores of the Algarve. Officially inaugurated back in 2012, the route has been certified as one of the best quality trails in Europe by the European Ramblers Association (ERA). While hiking along the Rota Vicentina, you will fail not to appreciate the huge efforts and friendly nature of the local inhabitants in their drive to promote this region as a leading destination in natural sustainable tourism. Here are Things to Expect on the Rota Vicentina

If you are interested in hiking the Rota Vicentina, here are some of the 7 things to remember and expect along the route:

Comprising of the Historical Way, the Fisherman’s trail and several loop walks, the Rota Vicentina provides over 165km of well-marked walking trails.  Alternating between these three different walking routes, gives you the freedom to tailor your walking distances each day and see some of the spectacular sights and activities on the trail at your own pace.

With such breathtaking views, it’s not surprising that a trail like this can at times be quite challenging.  The trail, especially that of the Fishermen’s Way, goes along rugged coastal cliffs and soft sandy beaches making it quite exerting at times.  Fear not, however, if you love the great outdoors and are keen on adventure, a good moderate degree of fitness is all you will need. It would be unforgivable to not give you the heads up on the miles and miles of pristine beaches that you will be treated to on your Rota Vicentina adventure.  These golden sandy beaches will make a lovely alternative to the spectacular cliff top paths on your route.  Be sure to take a few moments to stop and feel the sun on your face, sea breeze in your hair and the sounds of crashing Atlantic waves in the nearby ocean.  Go for a little swim or even dip your feet.  The South West coast of Portugal is renowned worldwide for surfing and you will find many of the towns along your route, in particular Sagres, have surfing schools where you can take a break from your Rota Vicentina hike and take to the waves or even just watch.

There is very few places on Earth with a better climate than the South of Portugal.  A Mediterranean climate despite not having a Mediterranean coast, the region is blessed with over 300 days of sunshine each year making the sunny Algarve hard to beat for walking in the great outdoors.  It should be noted Summers are hot and unpleasant for walking, instead we would recommend Spring and Autumn as the ideal times to embark on your Rota Vicentina adventure.

Hiking the Rota Vicentina route will bring you through the protected SW Alentejo and Vicentina Coast Natural Park comprising of many untouched diverse habitats.  If you have an interest in nature keep a look out for the several species of endemic plants and coastal dwelling amphibians, birds and sea fauna native to the region.  If you are hiking in Autumn, make sure look to the skies as the region is a corridor for soaring migratory birds. 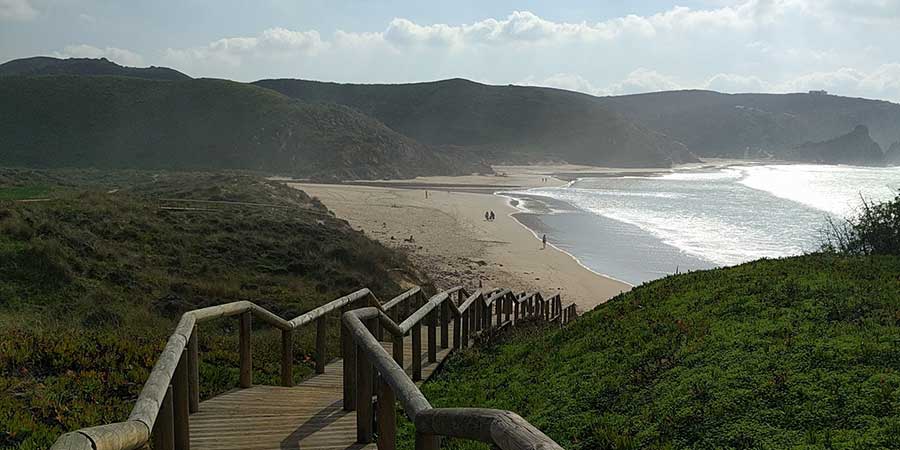 With many of the Rota Vicentina towns and villages located directly on the coastline or on estuaries its doesn’t come as a massive surprise of the long historical connection locals have with the sea.  Fishing was and still is today a big pastime in the area and so came about the aptly titled Fishermen’s Trail referring of course to the paths taken by locals to get to the best beaches and fishing spots. A tradition of living off the land and sea has only amplified the respect locals have for their surroundings and in the sustainable future of the region.  During your stay experience the warm and friendly hospitality of the locals and don’t forget to try the ‘Perceves’ or gooseneck barnacles, which are a local delicacy in the region.

Located roughly halfway between the cities and airports of Lisbon and Faro, Portugal is well connected with the rest of the world.  The easiest access point for the Rota Vicentina would naturally be the Portuguese capital of Lisbon as it has the most international connections and is the focal point for the county’s transport network.  That being said, getting somewhere of exceptional beauty is never supposed to be easy.   The best mode of transport to the Rota Vicentina will be the regional bus line ‘rede-expressos’ which provides links to the main starting points of Porto Covo and Odeceixe.  The same bus line can return you from Sagres to Lisbon after your hike.   Alternatively, you may wish to arrive via Lisbon International Airport and return home via Faro International Airport.  In this case, a bus transfer exists from Sagres to the town of Lagos, from which you can get the train to the Southern Portuguese city of Faro.

I hope you enjoyed reading our article on 7 Things to Expect on the Rota Vicentina. For more information about the Rota Vicentina Fishermen’s Trail, or our other walking routes in the Algarve and beyond, contact our travel specialists 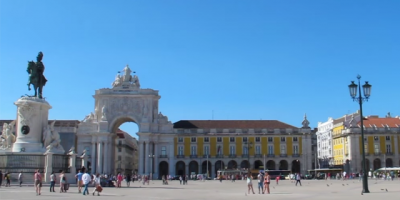