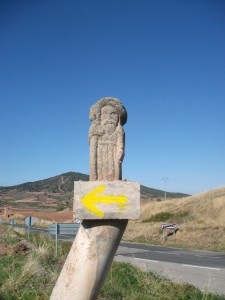 This past fall I went for a very long walk in Spain. How long? Well, I started out on September 22nd, in a small town in the French Pyrenees called Saint-Jean-Pied-de-Port, and got to my destination, the city of Santiago de Compostela in northwestern Spain, on October 27th. It was a walk that took me over four mountain ranges and a distance of about 500 miles (790 km)—nearly the same as if I had stepped out of my house in the suburbs of Chicago and walked south all the way to Memphis, Tennessee.

It’s actually fitting that I use Memphis as my example—home of Elvis Presley’s tomb at Graceland and considered a place of pilgrimage for rock ‘n’ roll fans and pop culture junkies from around the world. My walk was a pilgrimage too, only in the true sense of the word, ending at the Spanish region of Galicia at the tomb of the Apostle St. James. The walk is known as El Camino de Santiago, or the Way of St. James, and it’s been around a great deal longer than any American tourist trail. So long, in fact, it played an important role in the Reconquista of Spain during the Middle Ages.

There are numerous and conflicting stories explaining El Camino de Santiago’s establishment as a Christian pilgrimage route. The story in Spanish tradition is that St. James the Greater traveled all the way to Galicia to preach the Gospel after the death of Christ. He eventually returned to Jerusalem and was subsequently martyred by King Herod in 44 CE. After his death his disciples took his body back to Galicia to be buried at a site close to the Atlantic coast that was believed to be finis terre, or the land’s end of the Western world. St. James’s remains were said to lie forgotten for centuries until they were discovered and authenticated as belonging to the apostle in the 800s. A church was eventually built over his tomb and became a place of local pilgrimage.

Meanwhile, as large parts of Spain were claimed by the Moorish conquest, the Spanish Catholic Church took hold of the legend of St. James and his connection with Galicia to launch a re-conquest of Spain for Christianity. Stories sprung up of James appearing in battle to Christian Crusaders and securing their victory, and a rather problematic image was popularized of the apostle as “St. James the Moor-Slayer.” St. James’s tomb in Galicia, in a city now named after him, Santiago de Compostela, grew as a pilgrimage site, with routes to the tomb cropping up all over Europe. The most popular of these routes was the Camino Francés, a way that travels through the French Pyrenees to the Spanish village of Roncesvalles and then cuts west across northern Spain to Santiago. 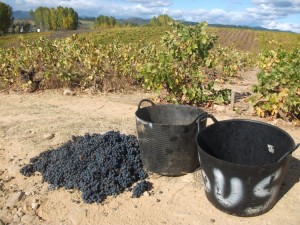 This is the still the most common route of the Camino, and this is the route I took. Today it passes through numerous cities and villages whose fame and very existence began as a stop on the Camino de Santiago. Modern-day pilgrims on the Camino Francés pass through Basque country and right by the site of a battle in the French epic The Song of Roland. They walk through Pamplona (right up the street where the bulls run every July), Burgos and León (both of which have stunning cathedrals laden with images of St. James), and Ponferadda (which boasts a castle built by the Knights Templar). They also cross over mountains and a vast plain known as the meseta, pass by cornfields, sunflower fields, vineyards, and even a free wine fountain, ramble past groves of olive, fig, almond, walnut, and chestnut trees, and trudge through the mud on rainy Galicia’s frequently flooded roads and hills.

Along the way they sleep in albergues or refugios—very basic hostels open only to pilgrims, some run by churches or religious orders, some by private owners, some brand new, some in buildings centuries old. All albergues, however, have three things in common: they all feature snorers, they all kick pilgrims out at dawn to get them going on the Camino, and they all provide a stamp in a pilgrim’s passport of sorts, called a credencial, that pilgrims guard and furnish to prove how far they’ve walked.

At the end of it all, pilgrims come to a stunning cathedral in the old section of Santiago, where they are granted a certificate known as a compostela, named after the city where it’s granted. Receiving a compostela comes with a plenary indulgence or a pardon for sins by the Catholic Church. Most pilgrims are just happy to have finally reached Santiago and possibly witness the marvelous swinging of the botafumeiro, a giant incense-dispensing urn unique to the Santiago Cathedral that is swung literally to the rafters during mass on holy days.

These days many pilgrims still attempt the Camino for religious or spiritual reasons, while many do it purely for the exercise or for a personal time-out. Meanwhile, as in the old days, pilgrims still come from far and wide. I met pilgrims who walked all the way to Santiago from Switzerland and Germany (a 90-day journey according to one of them). I met a Catholic priest from the Philippines making his second Camino, and I met a young Israeli man filling up on adventure before his mandatory entry into the Israeli army. I met pilgrims from Canada, Ireland, France, Venezuela, Brazil, Australia, South Korea, Japan, Italy, South Africa, Sweden, Catalonia, Ibiza…but I met few fellow Americans. Maybe they’re too busy going to Graceland.

Whatever the reason and wherever one comes from, arriving in Santiago after walking the Camino is a glorious feeling. Walking 500 miles may not be as impressive as, say, walking across a continent or walking around the world—but in the end, with all the friends a pilgrim makes, walking the Camino feels a bit like walking with the world.