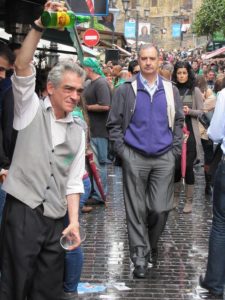 Cider, called Sidra in Spanish, is produced all over the north. In Asturias the main centers of production and apple orchards are around the towns of Nava and Villaviciosa, and also close to the city of Gijòn. After pressing the apples, they ferment naturally and then mature for about 5 months until bottling.  The alcohol content varies but is usually about 5-6 %, similar to some beers. “Sidra” is also effervescent due to the natural yeasts present, but except for a few cases of cheap cider imitations, Spanish cider is not carbonated. .  Cider bars in Asturias are called  a “Chigre”, whereas in the rest of Spain they are called a “Sidreria”. The cider houses where this delicious drink is produced are called “llagars” and a few of them can be visited. The funnest part of cider tasting in Asturias is being served your drink. A trained “escanciador”, or cider server, takes the bottle with the right hand and lifts the arm above the head. With  a straight back and a serious expression on the face, the escanciador pours the cider from about 2 feet up in the air into the special glass, without missing and hitting the floor (which is what will happen when you try to do this!). The objective is to “break” the cider in the glass, giving it a quick injection of air bubbles, and you should drink the cider immediately after pouring. Good brands of Sidra include Gaitero and Fanjul.

There is a Cider Museum in Nava, and this is where the cider festival is held every year in July.

Where to Stay in Oviedo – With a privileged location right in the heart of the city, the NH Principado hotel in Oviedo is ideal for walking to the city’s numerous attractions. The NH Principado hotel is located right where the historic and modern parts of the city converge, on a peaceful semi-pedestrian street right in front of the historic building of the Universidad de Oviedo. It’s a stone’s throw away from the Campoamor Theater, the Plaza de la Escandalera, the Cathedral, the San Francisco park and Uria street.

WHERE TO STAY near Oviedo – Asturias has many quaint hotels and some of our favorite little boutique gems for special stays in Asturias include: The “El Habana” in Llanes,  “Casona de la Paca” in Cudillero, “El Babu” in Caravia and the newly inaugurated beautiful 5* Palacio de Luces near the pretty fishing village of Lastres.

WHERE TO EAT – for hearty country cooking, it´s impossible to get a bad fabada in Asturias. For more refined meals, check out the gourmet hub of Arriondas at Casa Marcial and El Corral del Indianu. A few miles from Oviedo you have L’Alezna with star chef Pedro Martino and Casa Gerardo in Prendes near Gijón is great for high end dining. In case you haven´t heard of the gregarious Asturian celebrity TV chef and restaurateur (in the USA) José Andrés, check out his great website, full of interesting info on him, on Spain, on cuisine, Asturias and much more.