One big hug in Santiago de Compostela. The experience is simply incomparable. On a cold, almost chilly, day at the end of winter, you stand on the roof of one of Europe’s most historic cathedrals and have a sweeping view of a heritage city. As the rogue wind touches your face intermittently, you imagine the many previous lifetimes that must have taken place below, amid that panorama of spires and ancient roofs and the legendary people who lived them. You also remind yourself that, below you, inside the cathedral, is buried St. James the Apostle — as history and lore would have you believe.

We’ve seen foreign places from exciting vantage points (yeah, like hotel penthouse suites), but a roof of an ancient cathedral?

In so many beautiful, unexpected ways, our trip two months ago to Santiago de Compostela in Galicia, northwest of Spain, yielded many firsts—like having a visual “tour” of a medieval city from the cathedral roof and having what to us, at least, was the best Michelin-star-restaurant meal right in Pontevedra just outside Santiago. (Spain Tourism Board, through its Singapore office, planned for our group of media and travel agents a gastronomic tour of Barcelona, Madrid and Galicia, thus the Michelin-star restaurants on each leg of the trip.)

I will never forget the roof of the Cathedral of Santiago de Compostela as the peak where Singapore Airlines’ (Manila) manager (marketing communications and services) Rita Dy conquered her acute fear of heights. We stood at the door opening to the roof—I was still suffering from a viral cough in winter, so I was hesitant to brave the wind, and she had the jitters at the mere sight of the sloping roof from afar. With rowdy prodding from the rest of the group, already having a heyday photographing its romp on the top, I took Rita’s hand and led her on the trudge up the granite roof. We jointly conquered our cowardice.

At the peak, Rita opened her eyes wide, took in the view, and exclaimed—“Yes, this is so worth it.”

Santiago de Compostela is not an unknown destination to some Filipino travellers to Spain. After Madrid and Barcelona, Filipino tourists are somewhat familiar with it because they know of someone who has made the pilgrimage—the Way of St. James, it is called. I know someone who took a month off to walk the route to Santiago de Compostela, staying in inns, trekking alone, and meeting a pilgrim or two.

Although built on Christian worship, the pilgrimage isn’t religious as it is spiritual; in short, one doesn’t have to be a Christian or Catholic to do it. The Camino Pilgrimage has spanned about a thousand years.

Today, hundreds of thousands of pilgrims from all over have been doing it (272,135 a year—official brochure), and surely there must have been atheists among those. 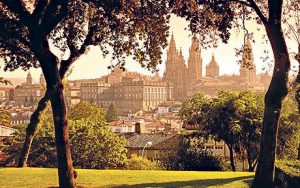 The Santiago pilgrimage, I learned from people who’ve done it, is a journey into oneself—alone. It’s usually done at a time when you want to ponder where you came from and where you’re headed. A life journey. A friend knew of a new widower who couldn’t come to terms with the loss of his wife and simply had to take time off from this world, albeit temporarily, to grieve alone. He took the Way of St. James.

Dating back to the 12th century, the Way of St. James has been written about regularly—that there are six main routes leading to the Cathedral where the remains of St. James are interred, and the pilgrims can choose from among the six; that one needs to trek 100 km to obtain the Compostela certificate.  The French route is the most popular.

Santiago de Compostela (“Field of stars,” so-called because the early pilgrims were supposed to have been led to James’ burial site by a burst of stars) was declared a Unesco World Heritage City in 1985 as one of Christendom’s greatest holy cities.

Because of its many attractions—from the religious and historical to the cultural, the gastronomic, and even shopping—Singapore Airlines, with Spain Tourism Board—is pushing Santiago as a destination this year. It asked some of the country’s leading travel agencies to develop special packages.

It all started with the belief that Santiago became the final resting place of the Apostle St. James, the Elder. After he was beheaded in Jerusalem, it is said that James’ disciples transported his remains on a boat to Compostela, where, in the year 814, it was discovered by a hermit called Paio (Pelayo) hidden in the forests of Libredon. King Alfonso II ordered a small church built alongside the tomb.

Word of this shrine spread. The succeeding monarch, King Alfonso III, had a bigger church built. A settlement developed around the church, which would be this present-day city centuries later.

In 1075, a basilica was built. This Romanesque-style basilica, with its towers and Latin-cross ground plan, is now the Cathedral. It is said to be the most significant building of Romanesque art in Spain.

In the 12th century, a master sculptor, Maestro Mateo, finished his “Portico de la Gloria,” considered the masterpiece of Romanesque sculpture with more than 200 startling figures. This medieval iconography represents the story of man’s salvation and Christ’s Resurrection. With this Holy Door, the Cathedral was finally consecrated in 1211. 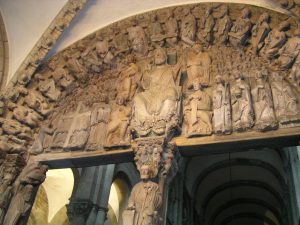 In the 17th and 18th centuries, Baroque features were added to the Cathedral. The Cathedral is the major come-on on the trip to Santiago. This is the pilgrims’ final destination—the adoration or at least the mere sight of the tomb of St. James in the cathedral.

After our climb to the rooftop that towered above the Plaza del Obradoira or the four Cathedral squares, we were herded to the metal coffer tomb of St. James and finally to his giant 13th-century bust. Tradition dictates that you give the bust a wide hug as you say your prayer and wish. Rita did and was rewarded with a euphoric moment: “I felt so protected as I spread my arms around it,” she said.

The feast of St. James is on July 25, and Compostela Holy Years are held whenever July 25 falls on a Sunday.

Santiago is a walking city, which is perhaps why tourists love it. Its historic part of the old town has medieval streets of stone and arched passageways that lead to museums and art galleries, baroque squares, gardens, convents and monasteries, stately homes, university campuses (there are a few Filipinos enrolled in the Santiago universities), markets, bars and restaurants.

The region of Galicia is considered Spain’s green space. Even from the air, as you land, you get a visual feast of an endless expanse of green. Then you discover how its flowers and trees make it ideal for a stroll.

Galicia is known for its fresh produce and seafood—the world’s top mussel producer—cheese, and wineries. Look for the breast-shaped cheese (Tetilla) in the market. In Peregrina, a short drive from Santiago, is a small Baroque church (Sanctuary of A Virxe de Peregrina) covered with scallop shells and the image of the Virgin of Peregrina dressed like a pilgrim—symbolic of the Portuguese Way to Santiago de Compostela.

Galicia is also proud of its bread.

In Pontevedra, we had a meal to remember in the Michelin-star restaurant Restorante Solla (www.restaurantesolla.com) or Casa Solla. This was quickly one of our best gastronomic experiences on this trip, if not the best. Whereas this trip was replete with molecular gastronomy (luckily, cochinillo didn’t come in foam form), Casa Solla was straightforward yet innovative cuisine—simple enough for you to decipher and relish what you were eating, whether meat or fish or vegetables, yet with enough nuances and subtleties to provide the twist and excitement. 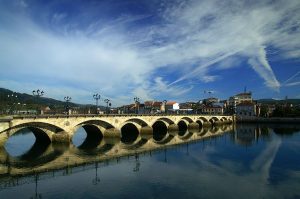 It was impressive that its chef/owner, Pepe Solla, didn’t come from some fancy culinary school. He comes from the second generation of chefs/restaurateurs who run this place. It’s been earning its Michelin star since the ’80s.

You will not be lacking Michelin-star restaurants in Galicia. That dinner, we went to Yayo da Porta, also in Pontevedra.

Pontevedra is only an hour away from Portugal. It was here where we espied the Chapel of As Aparicions—the former college of the Dorothean Nuns where Sister Lucia, one of the children in the Virgin apparition in Fatima, lived for 30 years.

And shopping—around the Cathedral in Santiago, I bought quaint, finely crafted earrings—one pair is made of wood, the other of black metal and silver. A friend thought my black metal/silver danglers were, hold your breath, Bulgari (of course not, Bulgari is either white gold or platinum). And that’s for a little more than 10 euros. Not bad at all.

When fervent faith mingles with smart shopping—that’s my kind of trip.

Galician native Maria has picked her top 10 things to do in Santiago de Compostela.

Link for the article and more information about any of the Camino walking or cycling tours, please contact one of our Travel Specialists.