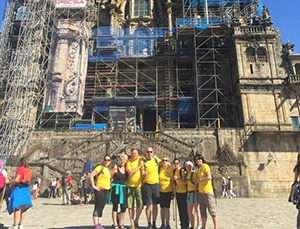 It really doesn’t really get much better than this. Thirty two recent friends gathered in the sacred square in Santiago around mid afternoon today having completed a daunting challenge successfully. Elation reigned and the sun shone down on some very tired bodies that had negotiated many highways and byways manfully, and womanfully, to reach their goal. This was a religious journey for some, a spiritual experience for others and a chance to find oneself for many but a lifelong memory for all.

Some early birds strode across the railway line in Padrón at 8am and the main group set off in pursuit 30 minutes later. Merchants opened their shutters for business as we wove through the narrow streets. Small tractors buzzed down country lanes and a man on a tall ladder fixing his roof tiles nearly came a cropper as he waved us on our way. Bells tolled from small churches and an industrious lady was washing clothes in an outside sink. Bernadette from Galway told me that she slung her hook from Coca Cola, but as an IT specialist is sure to be back in the workeforce shortly. As we negotiated some steep hills gardener Clair told me that she hopes her green tomatoes will be red when she returns. If not there will be trouble and it will be strawberries next year! 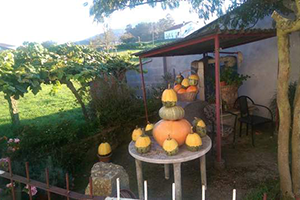 Kevin told us that none of his intensive military training with the Irish Army prepared him for 4 hours on the road with Michael. He’s a broken man! After our first coffee stop we negotiated a steep incline on a main road with cars and trucks whizzing past and emerging from all directions at junctions and roundabouts ..they even have fake zebra crossings to keep you guessing..and no attentive lollipop men like Phil. I did notice as I dodged the cars that the price of diesel was 1.09 and petrol 1.18, wouldn’t happen where we come from. Owen from Rathfarnham who has been fortunate enough to enjoy some free counselling sessions from some kind ladies in the group but isn’t quite sure what direction he should be going now. I’d speak to Hubert if I was him!

On we toiled through spectacular woodland and rolling fields, every corner brought a new feast for the eyes. A colourful pumpkin display in a garden was another photo opportunity. Mary from Ardee agreed with me that DundalkFC are certainties for the League of Ireland title and she should know, she works there. As we entered Santiago a digital sign showed 30 degrees and we looked for cover and directions. We were all pretty much running on empty as we struggled to reach the Cathedral, except Dave,  who is a perfect physical specimen, with a wonderful sense of humour and a personality to match ….actually he asked me to mention that!

Big thanks are due to our super, patient and efficient guide Maria.. Muchas Gracias! We return home tomorrow mid afternoon so we have some time to explore the wonders and delights of Santiago. Some will go to mass, some to the pub and others to bed…all well deserved. Many memories and sounds from The Way will stay with me for ever…… mist shrouded early morning streets, small tranquil churches, glimpses into peoples houses, cobweb bedecked vines, early morning shower water running, doors banging, Susan’s June Rodger’s laugh and Cawley’s cough, which penetrated three hotel floors.

Most of all though I will remember the camaraderie of a very special group of individuals who bonded as genuine friends for a week in Northern Spain.. we’ll meet again.. Buen Camino!

Eamonn is walking the Portuguese Way as part of the #CawleyCamino trip with Today FM Phil Cawley.

#CawleyCamino Day 5 from Caldas to Padron

#CawleyCamino Day 3 from Arcade to Pontevedra

#CawleyCamino lift off… the journey begins!

For more information about Camino de Santiago routes or to book your Camino trip, contact our travel specialists