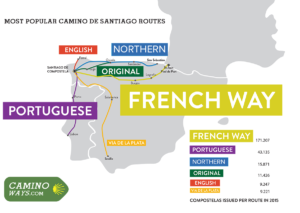 The latest Camino statistics from the Pilgrims Office in Santiago are out, giving us a very interesting insight into the Camino in 2015; they reveal the most popular routes, top countries on the Camino and the pilgrims’ favourite starting points.

Please note the statistics reflect the number of Compostela certificates, hence taking into account only those pilgrims finishing in Santiago and completing at least 100kms walking (or 200km by bike). They don’t account for pilgrims who do not finish in Santiago, or those who don’t request the Compostela.

A fantastic total number of 262.458 pilgrims reached Santiago in 2015 and received their Compostela pilgrim certificate.

In Camino statistics part 1, we look at the most popular routes and the pilgrims’ favourite starting Camino points in 2015.

5-English Way, Camino Ingles, is increasing in popularity with 9.247 (3.52%) Compostelas issued for pilgrims following in the footsteps of British and Irish pilgrims.

And these are the top 10 places chosen by pilgrims to start their journey:

13.199 (5,03%) chose to start from wonderful Porto, in Northern Portugal. Porto is the starting point of the Portuguese Coastal Way and also an important stop on the classic Camino Portugues.

10.351 (3,94%) departed from the picturesque mountain village of O Cebreiro, also on the Camino Frances.

8.400 (3,20%) chose Ponferrada, home of the iconic Templars Castle, as their starting point, also on the French Way, but also the starting point of the Camino de Invierno (one of our new Camino routes for 2016).