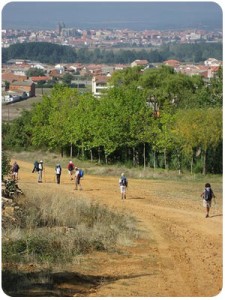 In the movie entitled “The Way”, Martin Sheen takes viewers with him across northern Spain on the ancient pilgrimage route known as the St. James’ Way or the Camino de Santiago. This 500-mile route starts in the Pyrenees, flows down through the wine-growing region of Rioja, then across the Meseta (high plain), over the Cantabrian mountain range, and out through Galicia into the Holy City of Santiago de Compostela.

Although most people do not walk the entire route (They are only required to complete the last 100 km (62 miles) of their route to receive the Compostela (certificate of completion)) the number of travellers does sometimes strain the resources—such as food and lodging—along the way.

However, there are other many pilgrimage routes in Europe that lead to Santiago de Compostela. This means that anyone who is interested in hiking on historic routes will find that there are many options—most are more strenuous than the Camino de Santiago but are also less crowded.
Often what happens is that pilgrims initially walk the Camino de Santiago and then decide to walk again to Santiago, but by a different route. Perhaps they start from Granada in Southern Spain or from San Sebastian along Spain’s northern coast. Maybe they “rediscover” an ancient route from Portugal—starting out from Lisbon or Porto (O Porto).

Many Europeans begin their pilgrimage hike from their homes in other parts of Spain, or from Germany, England, Italy, or Holland. Americans are increasingly walking trails that start further back than the Pyrenees. For example, they can take one of the four major Camino routes that begin in France and converge in Spain on “The Way.” Of the four—from Paris, Vezelay, Arles, and Le Puy, the latter is the route most taken. Pilgrims can follow these routes into Spain where they join the Camino de Santiago through Galicia into the Holy City of Santiago de Compostela.

Once hikers discover the network of Camino trails and realize that they provide a fantastic way of seeing Europe in depth, they are easily hooked and may return time after time. Whether “pilgrims” travel for “religious,” “spiritual & religious,” or “other” reasons (the choices given when applying for the Compostela at the Pilgrim Office), all agree that being on foot offers a unique way to learn about other countries’ peoples and places.