When it beckons you – go!

“I did the Camino last year, a pilgrimage in Spain that dates beyond the 9th century. I walked alone 500 miles in 40 days, but actually, never alone. When it beckons you – go!
The Camino de Santiago de Compostela, popularized by the film “The Way” starring Martin Sheen, is the ancient pilgrimage path that leads to Santiago de Compostela, the traditional site of the tomb of Saint James. According to legend, at James’ death, his disciples put his tomb on a boat. The boat headed off on its own, wandered the Mediterranean and came to rest in the bay below the Spanish town of Finisterre (“end of the world”), the western edge of the European continent. Jesus had told the apostles to proclaim His resurrection to the ends of the earth, so surely St. James would have followed the Lord’s command even in death. According to the legend, the boat turned to stone and can still be seen in the bay. The tomb was taken inland and laid to rest in the Compostela (field) that is now the town of Santiago de Compostela.
By the 9th century, with access to the Holy Land closed to Christians by the Saracens, pilgrims from all over Europe made their way in large numbers to Santiago. The stones and pathways have been made smooth and are made holy by more than 1,200 years under the feet of pilgrims.
Pilgrims usually stay in hostels called albergues; no reservations are needed. Neither is a map – you are never lost on the Camino. It’s about learning to trust that you are in the hands of God and that it is God who is leading you, God who protects you, God who is teaching you lessons you didn’t know you needed to learn. Maps are irrelevant, reservations absurd. Follow the arrows and the Lord will get you where He needs you to be that night. Miss an arrow, stray from the Camino and angels will lead you back.
Angels do guide you, and a dawning awareness of their presence is one of the Camino’s great gifts. On the first week of my walk, I met a 75-year-old pilgrim resting in the shade with her daughter.\ 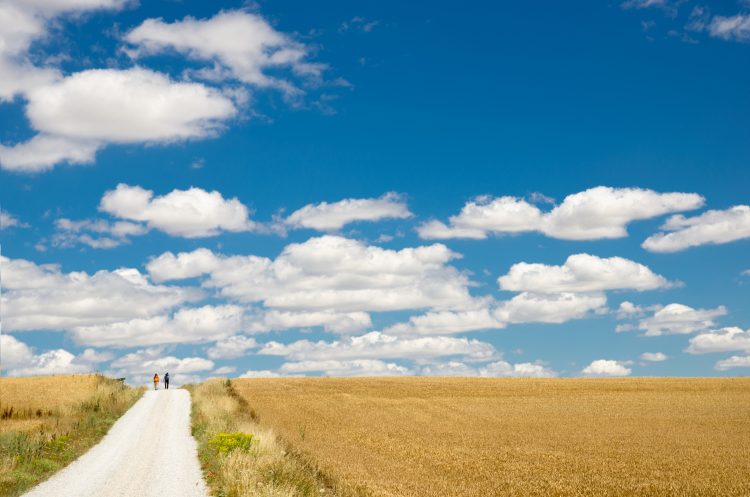 “Walk with the angels,” I said to her.
“Oh I do,” she said. “I see them all the time.”
I merely smiled, but by the end of the fourth week, I had come to see with her eyes. I was indeed being kept safe by angels.
The Camino offers challenges, pain (mostly blisters and achy muscles), and uncertainty. It takes time to learn to be a pilgrim. The first couple of weeks you’re still making mistakes and learning the routine. Then you get used to it, make friends, and learn to listen to your body and open your soul. Gradually you see with new eyes, come to understand what really matters, let go of what you thought was precious, and give yourself to the Camino. The frustration turns to joy. On the way, you will be humbled and broken open. And you will be filled by grace, become a vessel of God until almost imperceptibly you yourself are a better marker of God’s presence than the arrows and monoliths you follow.
And you learn The reason you thought you made the Camino was not the reason for making the Camino. It’s not about getting to Santiago de Compostela. It’s about the journey. What you expect to happen will not happen and what you didn’t expect will. You are not in control – God is.
It’s the Camino. People have trod its stones and walked its paths, climbed its hills and rested on shaded church patios, soothed their achy muscles and bandaged new blisters in its fountains and rivulets learned the kindness of strangers and been touched by the stories of pilgrims. You find yourself laughing in utter delight at the foolishness of pilgrimage, catch yourself awed by the magnificence of God being manifest in the most serendipitous ways, and most of all allow yourself to be humbled, brought low and caught in despair – only to be lifted to new heights and given new hope.
When it beckons you – go!
By Robert Bussen