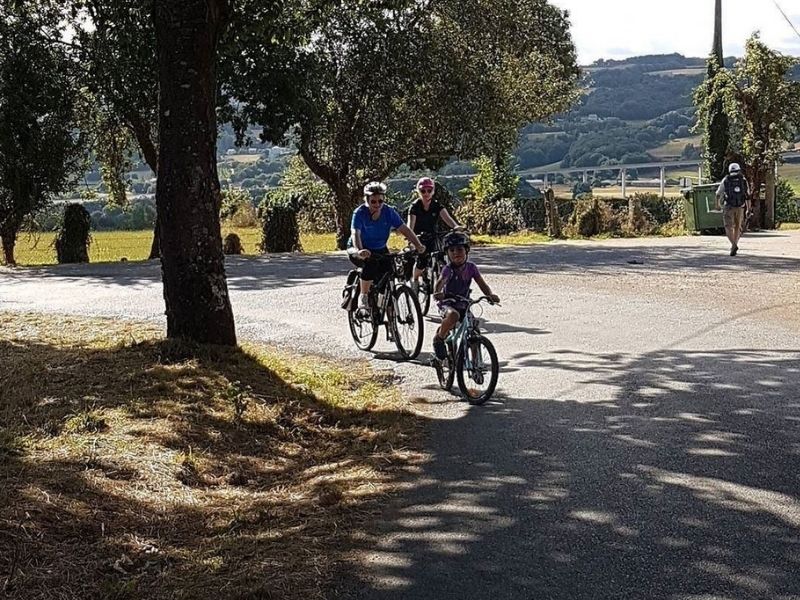 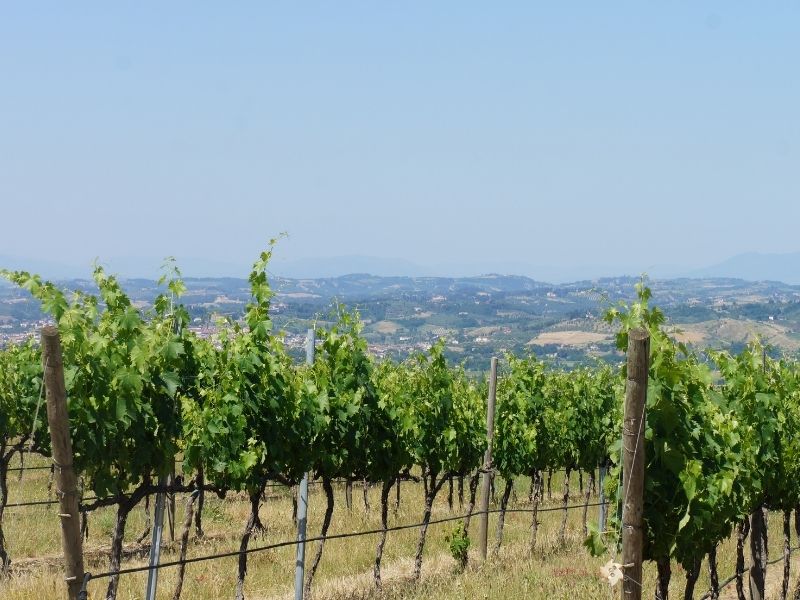 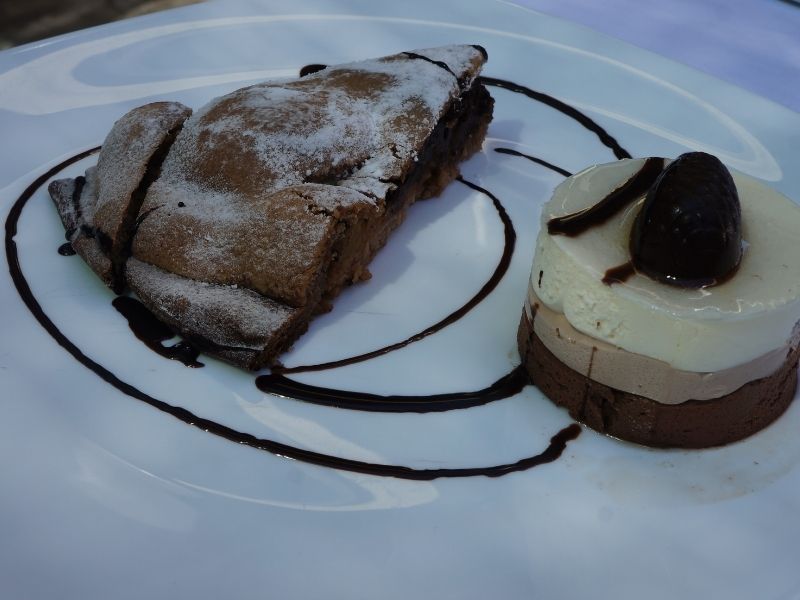 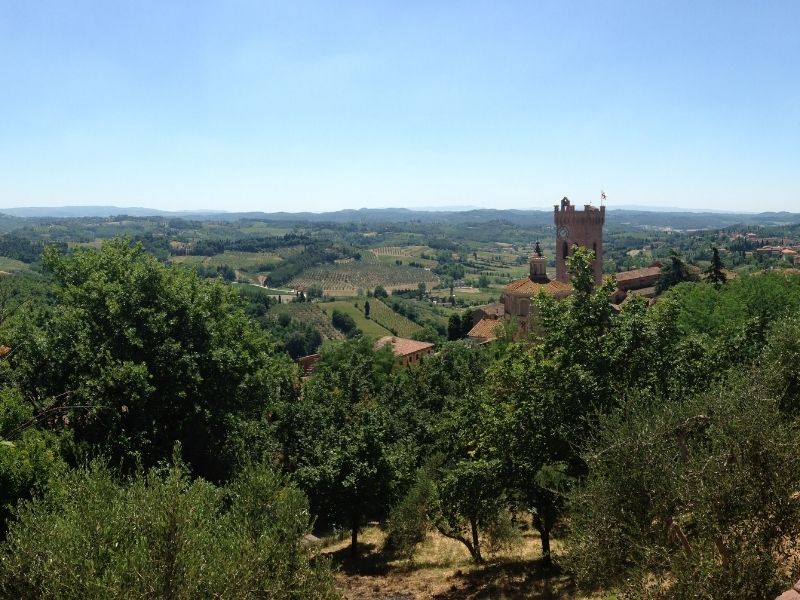 Family Cycling on the Via Francigena in Tuscany

This 6-night Family Cycling on the Via Francigena in Tuscany Tour will take you to the heart of Tuscany for an authentic Italian experience.

Cycling through rolling hills, olive groves, and vineyards, you will be immersed in the Tuscan countryside.

Your Family Cycling Via Francigena trip will start in the perched village of San Miniato. From this picturesque medieval village, you and your family will cycle over 5 days before finishing in the stunning city of Siena.

This itinerary is ideal for families who want to get an insight into Tuscan history and traditions while enjoying the breathtaking scenery of the countryside.

Being the most popular section of the Via Francigena, you will be able to socialise with fellow cyclists and families on the pilgrimage.

In addition to the region’s beauty, it is the perfect destination to treat the family to delicious Italian food which will be very much enjoyed after a day of cycling!

The Via Francigena will surprise you with the wealth of activities available for the little ones: whether they are interested in learning about medieval knights or fancy some playtime by the pool in the afternoon, there is something different to do every day!

Your family cycling adventure can be extended with an extra night in Siena if you wish to make the most of this spectacular city. You can also decide to walk this section if you wish to experience the Via Francigena the traditional way.

If you wish to know more about cycling on the Via Francigena, read our article here and get some valuable information and tips!

This itinerary is made for people traveling with kids (16 yo and under). If your party is made of adults only, have a look at the Full Via Francigena from Lucca to Rome

Map of the Family Cycling on the Via Francigena in Tuscany

Itinerary of the Family Cycling on the Via Francigena in Tuscany 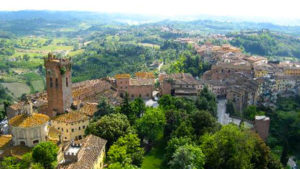 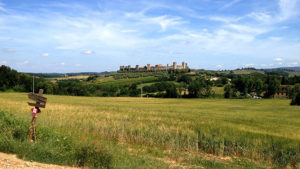 After a hearty breakfast, you are ready to start your adventure! Today’s section on the Via Francigena follows a lovely trail through oak and chestnut woods, olive groves, and vineyards. The trail is predominantly on off-road tracks over small rolling hills, the classic Tuscan landscape. On the way, you will pass Chianni where you should visit the lovely little church. There is a 300m climb to Gambassi Terme, a hilltop town best known for its spa and hot springs, as well as glass manufacturing.

In Gambassi Terme you will find a spectacular public park, where the locals love to gather late in the afternoon. It’s a great place for the children to play, under the shade of the century-old trees.

You will be staying in a country hotel, located within walking distance of the old town. The converted stone house will give you a taste of rural Italian life, where you will be able to relax in the garden or refresh by the pool. The traditional Tuscan home-cooked dinner will be the perfect conclusion to your day. 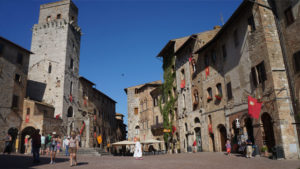 There is only 14km to the next stage. Your destination is San Gimignano, a wonderful walled medieval town listed as a UNESCO World Heritage site. The charming old town, full of history, is truly picturesque.

San Gimignano 1300 is a museum that will be enjoyed by the whole family. There, you will find a wonderful reconstruction of what the village looked like in the 14th century. The youngest ones can learn about the history of the town and understand how streets and constructions were designed back then. After an informative visit, we recommend an aperitivo in one of the charming piazzas.

Located on the edge of the old town, your family-run hotel is a perfect place to start your Via Francigena. With a long hospitality experience, you are guaranteed to experience a warm and friendly service. At the restaurant, you will find truly authentic Tuscan dishes for the whole family’s delight. 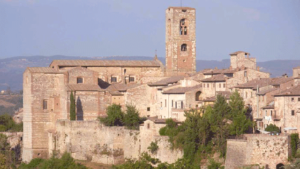 After a generous Italian breakfast, it will be time for you to start your walk. You will have a pleasant walk through olive groves and cypress avenues up to the village of Montecchio. It is a spectacular stretch of the Via Francigena with breathtaking views of the Tuscan countryside.

The curious ones will enjoy learning about the production of glass at the information Crystal museum. Besides, it is worth making your way to the upper part of the town taking the popular Baluardo, the glass lift accessible via a tunnel. The whole family should enjoy the experience as much as the views from the top.

Your accommodation will be located in the medieval town center, with all amenities on your doorstep. Modern and comfortable, you will be hosted in a converted historic building. Tonight again, you will taste the delicious Tuscan cuisine. 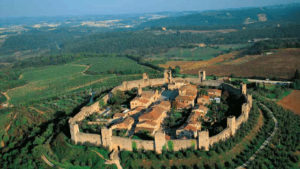 Monterrgioni is an open-air playground for the little ones. Its fortifications and castle will be the perfect setting for them to travel to medieval times. We recommend taking the whole family on the wall walk to understand the function of such constructions in medieval times and enjoy the spectacular view over the countryside. The armor museum is an interesting visit to complete their discovery and dress as real medieval knights.

Surrounded by Chianti vineyards, your hotel will be the ideal place for the whole family to relax after a long day of fun. You can spend the last afternoon by the pool or walk in the shade of the landscaped gardens. For dinner, fine Tuscan cuisine will be served at the hotel.

On the following day, if you do not wish to walk the full 20km to Siena, you can ask your hotel to book a taxi to drop you at Chioccola castle. From there, the walk to Siena is 11km. The taxi should cost around 20€. 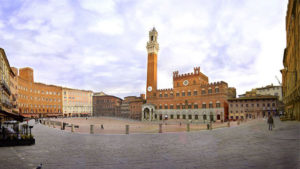 Today is your final stage to complete your Via Francigena. After a fulfilling breakfast, you will make your way to Siena. Approaching the city, you will pass through Porta Camolia, which is the traditional entrance taken by pilgrims since medieval times. Siena is a UNESCO World Heritage Site and one of the most visited places in Italy.

As you can expect, Siena has plenty to offer for children. On top of the centrally located playgrounds, we recommend taking the whole family to Orto de Pecci, located 5 minutes from Piazza del Campo. It is a delightful park looking up at the city, ideal to offer the young ones some playtime. Apart from the green lawn, you will find a pond, farm animals as well as medieval gardens.

For your last night on the Via Francigena, your accommodation will be located minutes walk from the old town.

We recommend an extra night to fully experience what Siena has to offer.

Florence International Airport 70km: To reach Santa Maria Novella train station (S.M.N) from the airport the easiest way is to take the city line. There is a local bus “Volainbus” that is run by the SITA bus company next to the Santa Maria Novella train station. It goes to and from the station every half hour from 5:30am to 11pm (25 minutes approx travel time from airport arrivals to the station). Find the general information of departure points and timetable at www.fsbusitalia.it

When you are in S.M.N train station you take the Italian Florence-Pisa regional line www.trenitalia.com, the journey to San Miniato takes about 45min and will cost approx 7€. From the train station, a shuttle service runs to the town center (15min journey).

From Roma Termini take the train to Florence, which is about 2h30 journey and cost €43. For timetables and itineraries see www.trenitalia.com

Florence International Airport 86km: You can either take the bus or the train. However they don’t stop at the same finishing point. The bus will drop you off in the heart of the historic city centre of Siena whereas Siena train station is located further away from the city centre and you might need to take a city bus (5 min travel time approx).
By bus:
– Autostradale bus express, coming from Pisa, stops in Florence and reaches Siena in less than 2 hours. See: www.airportbusexpress.it.
– SITA bus, www.sienamobilita.it. The bus station is just around the corner from the train station in Florence. SITA buses to Siena take just under an hour, run frequently and takes you to Siena historic city center. Make sure you take the rapide (express) and not the ordinarie, which stops in Poggibonsi and Colle Val d’Elsa. Ticket costs €12. To reach the Santa Maria Novella train station in Florence from the airport, just take the city line Vola in bus from the airport. The service connects the city centre in just 20 minutes and the fare is €6 one way.
By train:
Trains from Florence to Siena leave Santa Maria Novella station roughly once an hour on most days, and a direct train takes about 1.5 hours. The ticket is in the €6-10 range (if you’re on the direct train). See www.fsitaliane.it for more information.

Pisa International Airport 130km: You can take two different buses outside the airport going directly to Siena (under 2hr approximate travel time), for more information, see: http://www.pisa-airport.com.
– Train S.p.a, see: www.trainspa.it. Leaving directly from the airport to Piazza Gramsci in Siena. It takes you around two hours travel time and costs €14 one way.
– Autostradale, see: www.airportbusexpress.it. It follows similar itinerary than Train S.p.a but with a change in Florence. One way ticket costs €15. All informations, timetable and route with Siena Mobilita.

Bologna International Airport 167km: There are bus and train connections available to Siena.  Shuttle bus from Bologna Airport to Bologna Central Station (every 11 mins, €6 one-way).  For more information see: http://aerobus.bo.it/en.  From here you will take the train to Siena with a change in Florence.  Train to Siena (2hr 30, from €24 one-way). For more information see: http://www.trenitalia.com/.

Specialist: Domenica
Domenica was born in Basilicata, a region in the south of Italy. She has a Master degree in European and American Languages and Literature and she is passionate about learning f...
More by Domenica