The Road to Santiago

The Road to Santiago

THERE are three questions hikers and pilgrims ask each other when walking the 1,600 kilometre Santiago de Compostela, or Camino, pilgrimage trail. Where are you from? How far have you walked? How are your feet? The Road to Santiago.

A fourth question, “Why?” usually only comes after you’ve shared a bottle (or two) of wine at a crowded table, the exhaustion of the day almost forgotten in the well-being of a full stomach and the camaraderie around you.

The Road to Santiago. The Camino is a 1,000-year-old pilgrimage trail with different starting points all over Europe. The end result is the same though – the Cathedral in Santiago, Spain, where the bones of the apostle Saint James are supposedly buried. Along the way, you’ll get many opportunities to ask yourself, “Why?” My husband, Evan, and I found it took hiking up hills in the rain on slippery stone paths, trudging along ancient Roman roads in 38 C temperatures, or trying to find our beds in a room of 50 snoring new friends to even begin to comprehend why anyone would do such a physically demanding holiday.

We began our Camino, The Road to Santiago, in the medieval French town of Le Puy-en-Velay, one of the original starting points. Our plan was to walk 20 to 25 kilometres a day, which would get us across France, over the Pyrenee Mountains, and into Santiago, near the west coast of Spain, in 10 weeks, each of us carrying a small backpack filled with the bare minimum of clothes and toiletries.

Before leaving Le Puy, we attended the 7 a.m. pilgrim’s Mass and blessing in the Cathedral of Notre Dame. One of the priests officiating took off his cassock at the end of the service, revealing jeans and a white shirt and promptly announced he too was walking the Camino. We heard he was taking his “petite Canadienne” with him. It turns out in France a “little Canadian” refers to a pup tent. (We also discovered the rolling cattle grids used to stop cows from crossing from one field into another are called “passage Canadien.”)

Did I train? A bit, but I just assumed the first week would be a tough slog. It actually took nine days of throbbing legs and aching feet before my body got into the Camino rhythm. What I hadn’t realized was that my feet would be sore at the end of every day of our trip. When we live an urban life, our feet aren’t in shape to take pounding, climbing, sliding, and stumbling up – and down – mountains, through rocky stream beds, and on long stretches of stone or asphalt roads for six to eight hours a day, week after week, for two and a half months.

The people we met along the way fit into one of two categories. “Hikers” were on the trail for a variety of secular reasons. Two Irish couples were celebrating both retirement and a 60th birthday. Romanian judge Dana needed a break from her very stressful job. A young man from Austria had just finished his compulsory military training and wanted a cheap holiday before attending university. “Pilgrims,” on the other hand, walked with religious intent, hoping to have a spiritual experience, or find relief from grief, or to give thanks for no longer being ill. The Road to Santiago

In France, we spent an average of 10 to 13 euros a night for a bed in a small hostel with clean sheets along with a three to five-course dinner and breakfast. Spain was cheaper at five to nine euros a night but that was only for the bunk bed in a room that might hold 60 or more people – there was no food, rarely clean sheets, and, occasionally, no toilet paper. I started keeping track of the “Best” and “Worst” daily moments in my journal after experiencing both at the same time on Day 10. We walked 28 kilometres that day. Late in the afternoon, we found ourselves at the bottom of yet another hill, with Brigitte’s hostel located at the top in the tiny village of Saint Roch. I was exhausted. My feet ached and burned. I stumbled up the steep road, cursing France and demanding to know why Evan ever had such a stupid idea as this trip in the first place.

Brigitte, with wild frizzy hair and gipsy clothes, took one look at me, gently patted my hand, and led me inside. She gave me a brandy snifter full of warm Anise tea along with a chipped plate filled with a huge slab of homemade chocolate cake. (Using a brandy snifter for tea was the kind of thing that happened in Brigitte’s leaking, welcoming old house.) She had walked the Camino several years ago in emotional turmoil after her husband left her for another woman. She felt so at peace by the time she reached Santiago she decided she would dedicate her life to helping other pilgrims. She returned home, sold most of her things, bought a house in this village, and outfitted one room with five beds for pilgrims’ use only. Everything was by donation and communally shared. Our meal consisted of a soup made from dandelions and thistles that she yanked out of her garden, along with the most delicious vegetarian galette I’ve ever eaten. And more chocolate cake.
Every day brought new experiences. We arrived in Espeyrac soaking wet after walking hours in the rain only to discover the community gite (hostel) no longer served meals. The grocer had recently died and the only store in town was closed so we set out what food we had: a piece of farmer’s cheese, part of a very tough sausage, a chunk of three-day-old baguette, and a sliver of dark chocolate. On the Camino, you acquire an appreciation for food. Bits and pieces can become a gourmet meal when you’re hungry.

Day after day we walked, The Road to Santiago, through golden wheat fields, between long rows of grapevines, or alongside thousands of yellow sunflowers visible as far as the eye could see. Some paths lead us on misty wooded trails that had sunk below ground level, worn down by millions of feet over 1,000 years.

The downside is that day after day of walking many of the hours in silence gives your brain lots of time to chatter, to dig up moments of unfairness or joy, and to re-experience intense memories. There is nothing like climbing mountain trails in thunderstorms and trudging on deserts in sweltering heat to have each day consist of a roller-coaster of joy, despair, tears, awe, pain, and laughter.

On our fourth week, we turned a corner on a high country road and saw the Pyrenee Mountains in the distance for the first time. It was an emotional moment; we were now almost halfway to Santiago. The next big town was St. Jean Pied-de-Port, located at the base of the Pyrenees. It is also the beginning for many pilgrims and hikers. I had been worried about the Pyrenees and was relieved to find that although it was physically challenging, the fact we had already hiked 760 kilometres meant we were in good shape and could enjoy striding through wild grass-covered mountain meadows and looking down into the valleys below. We passed herds of free-ranging horses, flocks of sheep, a goat in labour, and eagles flying parallel to us. Arriving in Roncesvalles, Spain, on the other side of the mountain range, was a shock: a different language, different food, and instead of a 10-person hostel, the newly renovated Refugio can hold more than 200 pilgrims when necessary.Days later, we entered Pamplona as the city was preparing for the seven-day festival of San Fermin – the running of the bulls. Along with happy, drunken crowds, the busy streets were made even more claustrophobic by wooden barricades erected to direct the bulls into the town’s bullring. We moved from bar to bar, never eating the same tapas twice and drinking chilled white wine that cost a little more than a dollar a glass.

In Granon, we experienced the typical best of the Camino. In this tiny village, Father Luis never turns anyone away. Although his church floor and attic has space for 35 pilgrims, many more turned up when we were there. Evan and I were part of the overflow and given mats then directed into the winter chapel. Father Luis and his helpers tripled the Sangria recipe and literally put more potatoes in the stew. Sixty-one of us crammed into the main room on chairs, benches, and upturned boxes for a delicious communal meal. That was one of many moments that helped me realize why people walk the Camino two, three, and more times.
The next big challenge was the Meseta, an eight-day desert hike between Burgos and Leon. Day after day you put one foot in front of the other across flat, dusty, arid land. Guide books describe this section as having driven people mad and the scary stories resulted in some hikers taking the bus to avoid it. Evan and I found it hot, dry, and treeless but all I can say is that anyone who complained about it has never been to Saskatchewan in July. 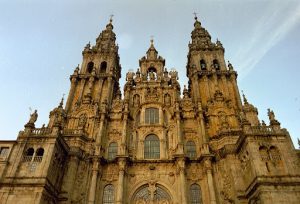 We finally arrived in Santiago 70 days and 1,600 kilometres later. Evan and I were in a daze. This was it? It was over? Now what? Unlike the medieval pilgrims, we didn’t have to turn around and head back the way we had come, but we both felt the need to end our journey with some sort of ritual. After attending the pilgrim’s mass in the Santiago Cathedral, I took a bus to Cape Finesterre on the coast. Purist Evan insisted on walking those extra 100 kilometres. It was only when my tired and painful bare feet sank into Finesterre’s sandy beach and were covered by a cold Atlantic Ocean wave that I felt our walk was over.

We’re still trying to sort out our experiences. The Camino was a challenge for us as a couple and for our bodies, but we returned having lost weight and with our feet, knees, and marriage intact. If any of you have considered the possibility of walking this ancient pilgrimage trail, I’d say “Do it!” Don’t worry about “why.” You’ll find that answer along the way. 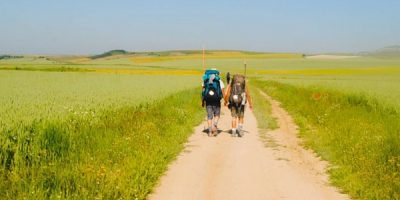 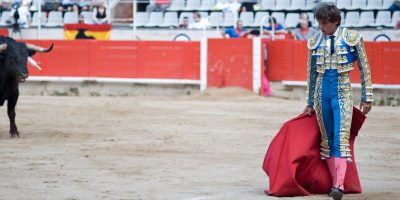