Did you ever wonder about the Camino to Santiago in Medieval times? and how pilgrims from overseas made their journey to Compostela? along the English Way from the UK or Ireland for instance? 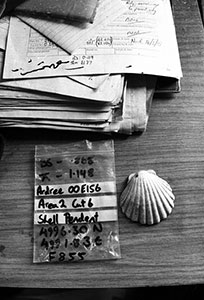 Esther Taboada is a journalist and photographer from Galicia. She lived in Ireland for a few years where she worked as an archaeologist in various excavations around the country. During her time as an archaeologist, Esther took stunning pictures in various sites but we particularly love the pictures she took of a Medieval settlement site in Ardreigh, Athy, County Kildare.

In Athy, Esther excavated and photographed the skeleton of a medieval Irish pilgrim who had been on a very special journey: the Camino de Santiago. The proof was the scallop shell the pilgrim chose to be buried with. These pictures taken in 2003 are very special for Esther:

“There was as well a wide variety of archaeological features found, and according to the analysis of their remains, it was possible to see what kind of lives they lived, what kind of diets they had, what illnesses they endured and for some it is possible to tell how they died. Several Jacobus shells were found among all these remains. As far as I know two other shells were found in the previous excavation phase and probably more in the following one,” she explains. 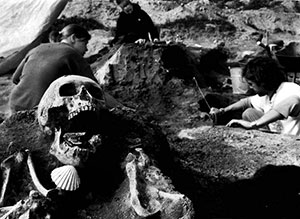 “It was quite a surprise to find the symbol of my homeland in a skeleton so far away from my country both in distance and time. I love photos that tell you a story and this picture makes you imagine perhaps a real adventure done thousand of years ago by this human being. Making the Jacobus Way must be very important for this person if he wanted to pass to the other world with a symbol of it.”

Given the long distance from Ireland to Santiago and the requirement to travel part of the journey by boat, a pilgrimage to Santiago de Compostela from Ireland was very expensive. Historical sources seem to indicate that the majority of Irish pilgrims travelling to Santiago were from the upper echelons of  Irish society. Pilgrims would have embarked from a variety of Irish ports such as Drogheda, Dublin, Wexford, New Ross, Waterford, Youghal, Cork, Kinsale, Dingle, Limerick and Galway (Stalley 1988, 398). 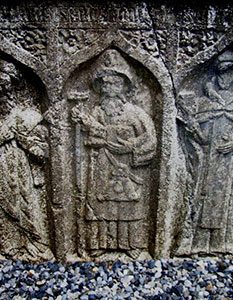 “St James was a saint that appealed to both the Gaelic and Anglo Norman parts of Irish Society . Dedications to the saint are found all around the country.

On his second pilgrimage in 1483 he was accompanied by two bailiffs or city councillors, Patrick Mulligan and Philip Bryan and there are records surviving of letters from him to the government to ask permission to go on pilgrimage,” Louise tells us, indicating also that people in office would have to ask permission to go on a long distance pilgrimage. This journey was re-enacted in 2008.

Souvenirs purchased by medieval Camino pilgrims to Santiago have been recovered by archaeologists all across Europe, including Ireland.

Saint James Gate in Dublin 8 was a traditional starting point for pilgrims setting sail from the Dublin area, on their way to Santiago de Compostela. Pilgrim passports were stamped here before heading on their Camino de Santiago journey. Traditionally they would have landed in the northern ports of Galicia and other regions in Spain, mainly the cities of A Coruña and Ferrol (today the two main starting points for the English Way to Santiago), but also from smaller ports along the north coast. This tradition still persists and Irish pilgrims can obtain their pilgrim passports (credenciales) from the Irish Society of Friends of Saint James founded in 1992, as well as get their pilgrim passport stamped at St James Church nearby.

*About the English Way to Santiago