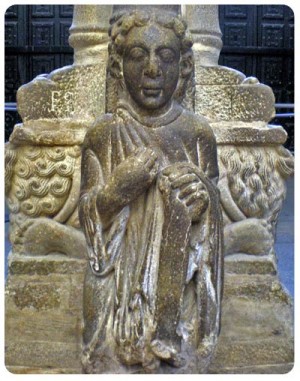 Most pilgrims walking the Camino and visiting the Cathedral in Santiago de Compostela have one main objective there: seeing the tomb of St James.

However, for many years (many estimate even up to four centuries), there was another ‘Saint’ that partially stole the limelight from the mighty St James. In Galicia, it is called ‘Santo dos Croques’, the Saint of the Bumps.

The Santo dos Croques is a stone figure you will find in a kneeling position on the inside of the Pórtico da Gloria, the Romanesque porch entrance to the Cathedral built in 1168 by Mestre Mateo, an important sculpture and architecture master of the time.

This figure became the object of a semi-religious tradition (or superstition) among visitors to the cathedral. The likely origin is believed to be Santiago’s University student population: University students would bang their head three times against the head of the so-called Santo dos Croques, as they believed it to be a source of knowledge, intelligence, wisdom and ultimately a lucky charm ahead of University exams. Hence its name, ‘croque’ meaning ‘bump’ in Galician. 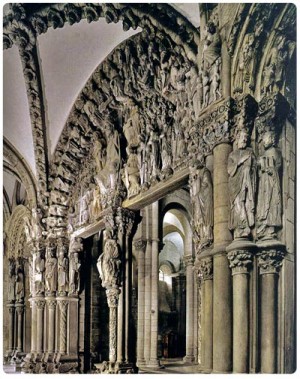 This student tradition became widespread among the whole population of Santiago and beyond, as well as pilgrims walking to Santiago. Many thought the figure was that of a Saint, some might have even believed it was St James but, despite its name, the Santo dos Croques is not a Santo at all, but a self-sculpture of Mestre Mateo, the master sculptor himself.

Four centuries of head rubbing and intelligence sharing finally came to an end in 2009. With the number of pilgrims walking the Camino and visitors to the cathedral increasing every year, poor Mestre Mateo’s head was suffering too much wear and tear.

Coinciding with the refurbishment and restoration work of the whole Pórtico da Gloria, Cathedral authorities decided it would be wise to ban this practice in order to protect the students’ favourite ‘Saint’.