Santo Domingo de la Calzada in La Rioja, is home to one of the most famous miracles or legends on the Camino de Santiago. Located on the third section of the French Way of the Camino de Santiago, the history of Santo Domingo de la Calzada is intricately linked to the way of St James. The town takes its name after Saint Dominic (the name literally means Saint Dominic of the road) who dedicated his life to improving the conditions of pilgrims en route to Santiago in the Middle Ages, building pilgrim hospitals, roads and bridges along The Way.

A small town of just 6000 residents, Santo Domingo has retained its medieval charm and has an impressive number of monuments per square metre welcoming the visitors and passing pilgrims, reminders of this holy past: a beautiful cathedral, two Paradors (one of them used to be a pilgrims hospital), an abbey and many chapels, as well as grand houses belonging to local noble families and personalities.

Santo Domingo de la Calzada is also famous for the so called ‘miracle of the hen’, considered to be the most famous of the Middle Ages and the Camino de Santiago. 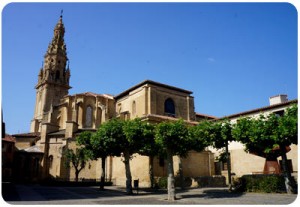 According to the legend, a German young man and his family were travelling as pilgrims to Santiago. On the way, they stopped in Santo Domingo de la Calzada for the night, where he rejected the advances of the inn keeper’s daughter. Upset with the rejection, the young woman hid a silver cup in the pilgrim’s bag, who would be later accused of theft and condemned to dead.

On their return from Santiago de Compostela, his parents went back to Santo Domingo de la Calzada to give the final farewell to their son and found him still alive, thanks to the intervention of Saint Dominic who new of the young man’s innocence.

Surprised by such a miracle, the parents went to the authorities to let them know. The Corregidor (sheriff) of Santo Domingo being skeptical replied that their son would be as alive as the roasted cockerel and hen he was going to eat that very moment. As he pronounced these words, the cockerel and hen instantly got up on the plate, their white feathers grew back and they started to sing. And ever since, it is said about the town: ‘Santo Domingo de la Calzada, where the hen sang after being roasted.” (Santo Domingo de la Calzada, donde la gallina cantó después de asada).