Le Puy-en-Velay, on the Chemin du Puy, is a treasure of natural, architectural and cultural sights. The whole area of the upper town is included in the protected heritage sector of 35 hectares where architectural elements of ancient homes are preserved; turrets, sculpted doorways and mullioned windows. Chosen Camino starting place is Le Puy-en-Velay. 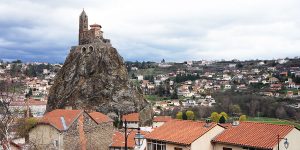 Le Puy-en-Velay’s most striking attraction is the Cathédrale Notre-Dame du Puy, dating chiefly from the first half of the 12th century. The facade, striped in courses of white sandstone and black volcanic breccia, is reached by a flight of sixty steps. Pilgrims starting their journey to Santiago de Compostela gather here to be blessed each morning.

Since 1998 it has been a UNESCO World Heritage Site, as part of the “Routes of Santiago de Compostela in France”. Saint-Michel d’Aiguilhe is a chapel in Aiguilhe, near Le Puy-en-Velay, France, built in 962 on a volcanic formation 85 metres (279 ft) high. The chapel is reached by 268 steps carved into the rock. It was built to celebrate the return from the pilgrimage of Saint James.

There is also a bronze statue of Notre-Dame de France (The Virgin Mary) overlooking the town which was designed by French sculptor Jean-Marie Bonnassieux and is made from 213 Russian cannons taken in the Siege of Sevastopol (1854–1855).

Le Puy-en-Velay is renowned for the century-old tradition of hand-made lace and today the old skills and techniques have been maintained thanks to the creation of a national academy of lace, which continues to keep the traditional art of lace-making alive. Le Puy is also famous for a particular strain of green lentils. The lentils, grown on the thin soils of the area, are very small and almost black in colour. Their unique quality and flavour derive from their high protein and relatively low carbohydrate content. They are widely used in soups and also to accompany goose, duck and sausage dishes. Le Puy Green lentil (Lentille Verte du Puy) is an appellation recognised throughout the European Union (Protected Designation of Origin).

You will love Le Puy en Velay: by wandering the cobbled streets of the town, going for coffee at the terraces of the many cafes, and haggle at the bi-weekly market.

For me, Le Puy en Velay is the French equivalent of Santiago de Compostela.

*When is it a good time to go? every year, the third weekend in September, the town hosts its Roi de l’Oiseau (King Bird) festival, a colourful ‘period’ festival taking Le Puy en Velay back to its glorious 16th century past. Re-enactment of life in Le Puy in the 1500s is combined with craft exhibitions, music, markets and many other activities.