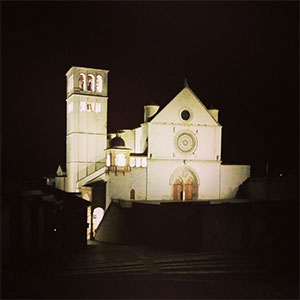 The city of Assisi is not only the geographic centre but also the spiritual core of the St Francis Way or Cammino di Francesco: many important sites linked to the life of Saint Francis are located in this unique city-sanctuary, listed as a UNESCO World Heritage Site for its art, architecture and unique history.

The same way pilgrims to Rome traditionally visited the city’s most important ‘seven churches’, following a city pilgrimage that would allow them to receive the Jubilee indulgence; pilgrims to Assisi can follow a similar trail, visiting churches in and around the city, all related to the life and work of Saint Francis, San Francesco.

The Basilica of St Francis or Basilia di San Francesco is undoubtedly the most important site for visitors and pilgrims to Assisi; as it is here where you will find the tomb of Saint Francis, in a crypt under the altar. It is composed by two superimposed churches. But there are other ‘seven churches’ you shouldn’t miss while you are in Assisi.

These are the must-see churches of Assisi, on the St Francis Way:

2- Basilica of Santa Chiara. Meeting Chiara (Clare) changed the life of Francis. In the basilica’s crypt you will find the remains of St Clare (founder of the Order of Poor Clares), as well as other relics such as the cowl, the breviary of Francis and some hair inside a casket. 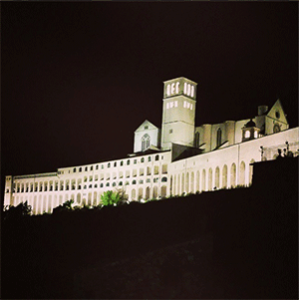 3- The New Church, built on the site of St Francis’ birthplace.

4- Church of Santa Maria Maggiore, near the ancient cathedral of Assisi, was the residence of Bishop Francis. It is here where he made the dramatic gesture of undressing, getting rid of his material possessions.

5- Church of San Damiano. This is the small church built by Saint Francis and now incorporated into the convent. It played a central role in the life of Francis: it is here where he lived with his first companions in the service to the poor and the lepers, begging and preaching in the streets of Assisi.

6- The Basilica of Santa Maria degli Angeli is the place where the Franciscan community was given the rules of the order and where Francis left his earthly life, dying naked on the ground. Inside the monastery you will find a famous rose garden, where Francis threw himself to atone for his sins: the plant miraculously missed all the thorns and didn’t hurt the body of the saint in any way. Even today, the rose has no thorns.

7- Church of Rivotorto is another important building (a few kms outside the city), where Francis and the first Franciscan fraternity lived for a while.

A visit to the Pilgrims Oratory is also highly recommended. For those arriving on foot, it takes on a special significance, as it hosts a rich series of frescoes related to Saint James and the pilgrimage to Santiago de Compostela: the Camino de Santiago.