Camino del Norte on a Path to Paradise by Jim Gallagher

Camino del Norte on a Path to Paradise. The pretty little town of Zumaia, its harbour packed full of boats, glistened in the sun far below. A golden strand, bordered by a long quay wall, stretched out before us as we gazed down from the mountain path that led to this idyllic spot. 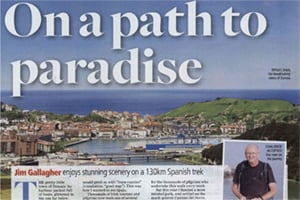 We were on a remote stretch of the Camino del Norte (The Northern Way), which runs along the coast of Northern Spain.

We were walking in the Basque Country, from the beautiful city of San Sebastian to Bilbao, a 130km trail through woodlands, green farmland and rolling coastal hills. Along the way, we encountered few other walkers, but did pass through picturesque villages where locals would greet us with “buen Camino” (translation: good way). This was how I wanted to see Spain.

Thousands of Irish tourists and pilgrims now walk one of the several Caminos to the beautiful city of Santiago de Compostela, where the supposed remains of St James are held in the cathedral, every year.

There’s a Portuguese Camino, a Camino Primitivo across the mountains but by far the most popular is the French Way (Camino Frances), from St Jean Pied de Port in France, across the Pyrenees.  I had tackled the busiest week of this month-long trek – the 110km from Sarria to Santiago – four years ago, and was surprised by the crowds along the way. Cafes, restaurants and hostels have sprung up all along the route to cater for the thousands of pilgrims who undertake this walk every week.

But this year I fancied a more isolated path, and settled on the much quieter Camino del Norte, which begins near San Sebastian and hugs the coast, before eventually turning inland into Santiago. And here we were, after a couple of hours walking from the town of Deba, coming over the crest of a hill to gaze down on the lovely sight of sunlit Zumaia.

I had befriended a German hiker the day before, one of only five people I saw on the trail that day, and now we were relishing the sunshine. A couple of hours later a German girl joined our company, and for the rest of the week the three of us hiked together. My journey had started two days before, with a direct Aer Lingus flight from Dublin to Bilbao. A one-hour drive takes you from the airport to the centre of San Sebastian, where my walk back to Bilbao was to begin.

San Sebastian, the current European Capital of Culture, is a gorgeous metropolis, with two magnificent city beaches. I was travelling with specialists CaminoWays.com who had booked me into a room in the old town, a perfect location for an evening exploring one of the world’s great foodie cities.

The next day I set off on my adventures at 8.15am, walking along the seafront as the city woke up. It was overcast but a warm 16C, and there were swimmers and surfers already in the water on this October morning.

It took nearly an hour to get on the well-marked trail and it was uphill all the way! Another hour and I was in open rolling countryside, gazing down at the sea on my right. There were no facilities – except for a water tap – until I reached the town of Orio at noon, so walkers have to be prepared and bring provisions.

Next stop was Zarautz, a seaside town with a fabulous beach and quaint harbour. From here it was another 6km to the town of Getaria, where I arrived at the Ixas Gain Hotel in the early afternoon, tired but exhilarated from my 27km walk. There are numerous restaurants and bars dotting its streets, and I settled for one in the harbour. The simple but stylish hotel has an honesty bar where you can help yourself to the €1.60 bottles of bear. Yes, the Basque Country, is that cheap.

The second day’s 17km walk was easy by comparison, although there were still many hills to climb. The only other walkers we encountered were solo hikers or couples, but then suddenly a large group appeared walking in the opposite direction – and I heard Irish accents. It turned out they were from a Dublin walking group who did the Camino every year.

We ended our day in the town of Deba, where the town square comes alive at night with families coming out to enjoy the last of the day’s sunshine over a coffee or a beer.  We dined on the pintxos (tapas) that are laid out on every bar in the Basque Country at this time of day.

My 3 start hotel, the Aisia Deba, was in the perfect location, with my own terrace overlooking the beach. There’s also an underground spa and pool, where the sea water is heated to 27C, a great tonic for weary legs.

Next stop was Markina-Xemaia, a trek 23km to the west with 3000ft of climbing. On the walk I met two lively ladies, Tina and Geraldine, from Carrickmacross, Co. Monaghan, and our paths were to cross and recross many times over the next few days. Camino del Norte on a Path to Paradise by Jim Gallagher.

My German friend and I had several beers in Markina’s square before I had to leave them, as my accommodation was another 3km along the Camino, outside town. They were staying in hostels where it’s first come, first served. By comparison I was staying in luxury, with my suitcase forwarded to the next hotel every day by CaminoWays.com.

Meeting up the next day we headed to Guernica, the town immortalised by Pablo Picasso in 1937 when he painted the destruction of the town during a bombing blitz in the Spanish Civil War.

Hotel Guernika was the best in town and right next to an Irish pub. It was only a short walk to the pedestrianised Pablo Picasso street, which was filled with outdoor cafes and where I bumped into the Carrickmacross ladies in the excellent Julen restaurants.

Next day it was 23km on to Lezama, which I hobbled into after pulling calf muscles in both legs, but where I was able to recuperate for the night in the Rural Matsa lodgings just outside town. And the following day I limped the last few miles into the lovely city of Bilbao.

My first glimpse was from a mountain top, and it looked stunning spread out in the valley below. My city centre accommodation was the Casal Gurea, where the staff could not have been more helpful. You could spend days in the lively metropolis, taking in everything from the famous space-like Guggenheim Museum, historic squares and cobbled streets to boat tours on the Rio Nervion.

But sadly my time was up and a city bus ticket got me to Bilbao Airport in just 15 minutes for my flight home.

*Jim Gallagher’s article was originally published by the Sunday World Ireland in November 2016.