“My biggest advice to anyone wanting to tackle the Camino is to find your own pace. There will always be people faster and slower than you. Try not to let the pace of another person dictate how fast your Camino should be. Walk the Camino at a pace that feels right to you.”

These are the words of Bryan Steward, one of many pilgrims who walk the Camino de Santiago every year. Bryan hails from New Jersey in the USA. He has Becker muscular dystrophy, which is a progressive neuromuscular condition that causes his muscles to get weaker over time. As one who enjoys hiking and all the outdoor world has to offer, this can be quite a struggle.

For Bryan “it mostly affects me now by making steps and hills difficult for me to walk up. Heavy objects are hard for me to lift. I tend to fall more than the average person, and sometimes I have difficulty getting back up. I will continue to have more trouble as I get older. Using a cane or a wheelchair is likely in my future.” 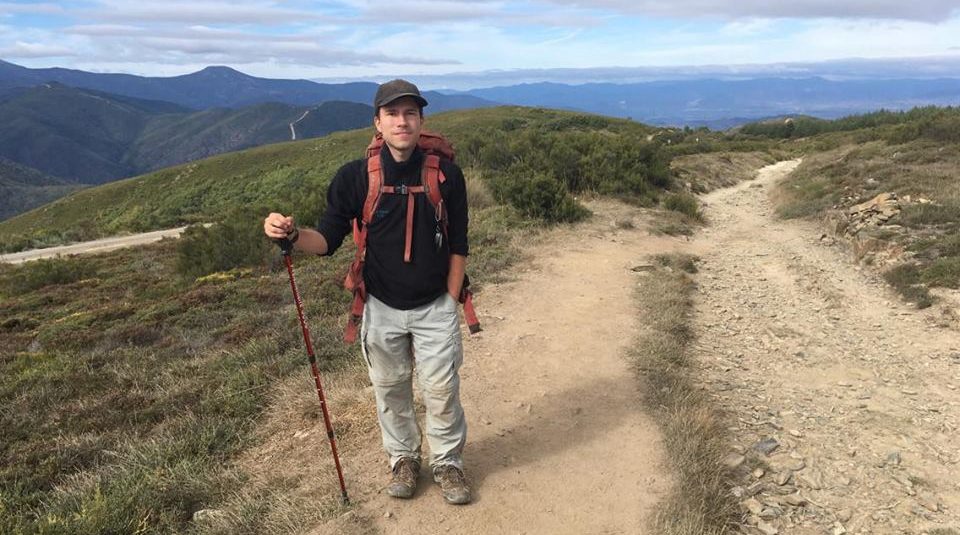 But Bryan, who is due to get married in May, is not someone who sits around. He’s actually the opposite and recently tackled the Camino de Santiago, a pilgrimage that can be physically and emotionally grueling for many who embark on this journey.

When asked why he wanted to embark on the Camino, he said: “What made me want to walk the Camino was my desire to make the most out of my physical abilities while I still can. But I think on another note, a lot of hiking I did used to be a way to prove to myself that muscular dystrophy had no impact on what I wanted to do. I was definitely in for quite an awakening on the Camino when I was confronted with terrain that overwhelmed me. But I quickly developed a mindset that helped me make the Camino about making the most of what I have and finding “my own pace.” I worked through a lot of issues on the Camino. I realized I can’t hide from my condition and that I have to be honest about who I am.”

Before embarking on this journey, he had some fears and reservations due to his condition, as “intense physical exertion” is not recommended: “I needed to be very careful not to push myself too hard or get injured. I really tried to pace myself and get into a rhythm that worked for me. One of my biggest memories from the Camino was when I struggled to walk up the steep road to the pilgrim’s office in St-Jean. I had no idea how I would cross the Pyrenees when I was having trouble before even beginning the Camino.” 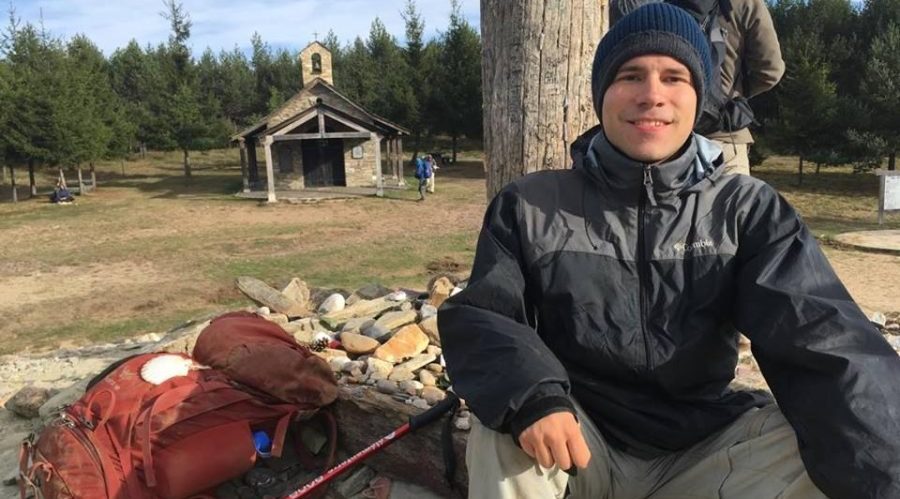 He did have some struggles while walking the Camino, with the biggest being how his slower pace affected the friendships he made: “Initially I was saddened when someone realized they couldn’t keep walking at my slow pace if they wanted to finish the Camino. That changed over time as the coming and going of other pilgrims became normal. One moment where things clicked for me was when I explained to another pilgrim how my slow pace caused me to separate from a group I was with. I was told, ‘Slow? There is no such thing as slow on the Camino; there is only your own pace.’ I realized that finding my own pace was the only way I would stay sane on the Camino.”

Bryan persevered and ended up having an unforgettable experience. One of his fondest memories from the trip was “being in an environment where I felt help was readily available when I needed it. People were constantly jumping in and lending me a hand. I was even carried up a hill at one point. Growing up I was usually afraid to have people help me, and I never wanted to feel like a burden. I learned to accept help from others on the Camino.”

Going at his own pace later became the title for Bryan’s book about his Camino journey. When I asked him what made him want to write a book about his experience, he said: “I think the biggest thing I want to achieve by sharing my experience with others is to show them that we all have a story. We all have obstacles to overcome, difficult events to deal with, and burdens to accept. I wanted my story to show people how much is possible in life. If you take the time to face your fears and weaknesses, you will understand what it means to be truly strong.”

Though he did joke that “in some ways, writing the book was harder than walking the Camino!” and maintained that “keeping things as honest as you can is important. Don’t be afraid to let yourself bleed onto the page.” 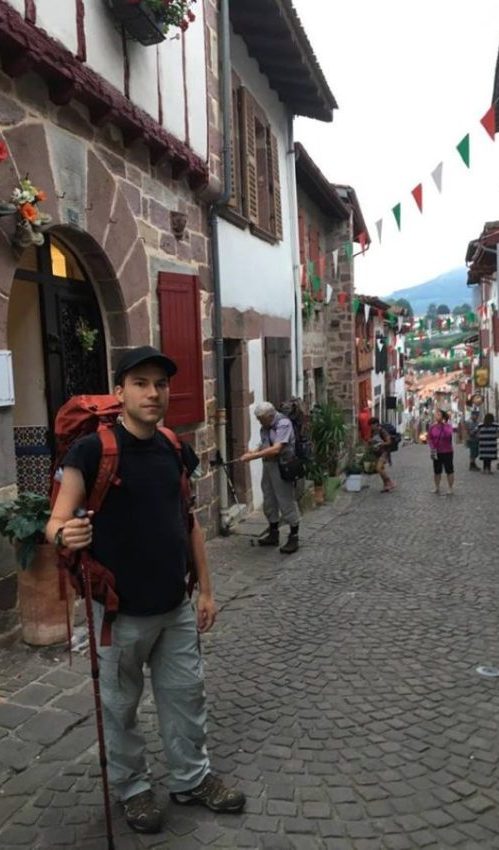 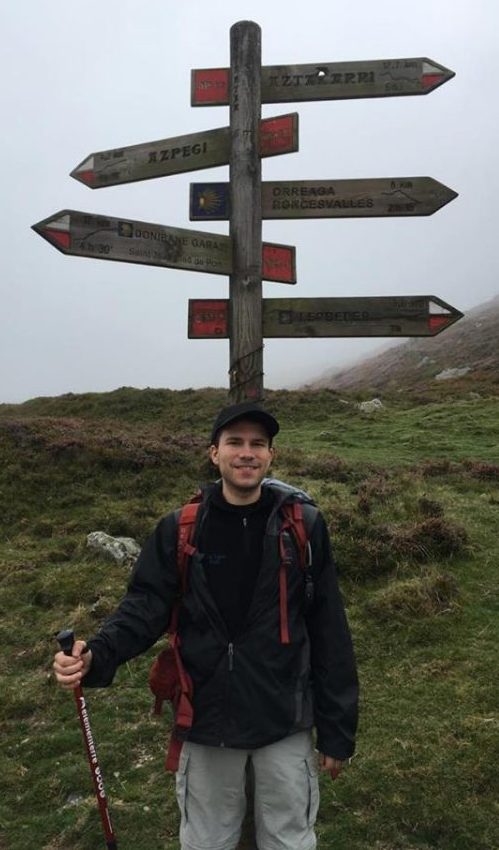 People all have their own individual struggles, whether they are visible to others or not. I was struck by the title of Bryan’s book because nobody seems exempt from rushing through their lives. This is something Bryan resonated with when asked:

“Walking the Camino is about slowing down and taking in the world around you. We constantly drive cars from one place to another and never really understand distances. Walking the Camino makes you understand that. But I think more than moving slower through life, finding a pace that works for you is most important. If moving quickly is what makes you happy, then you should move quickly. But for me, the idea of finding joy at a slower pace really helps.”

Wondering what advice he would offer his childhood self, especially after completing the Camino and meeting so many interesting people, he said: “My biggest advice to my childhood self would be not to fear people who offer help. It’s always easy to say that you don’t need help and feel like you accomplished everything on your own, but nobody can go through life without help from others. We wouldn’t be here now if no one cared for us as infants. I think it’s important to find ways to incorporate helping others and accepting help from others into our daily lives.” 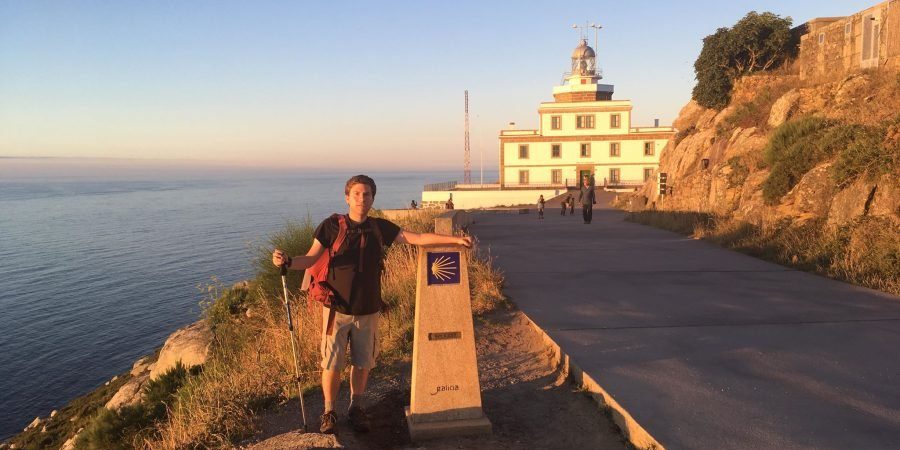 Finally, I wondered what Bryan learned from his time on the Camino. For him, his main takeaway was how he viewed his own personal burdens:

“I think the most powerful thoughts I had on the Camino were how the journey changed the way I viewed the ‘burden’ of having muscular dystrophy. I had some hard feelings at the monument Cruz de Ferro where pilgrims are expected to leave behind a rock that represents a burden they have brought onto the trail. Clearly my burden was having muscular dystrophy, but how could I leave that behind?

“When I thought back on the wisdom about walking at one’s own pace, I realized that finding your own pace is about accepting the burdens you carry. So maybe my rock did not have to be about leaving something behind, but rather taking something with me, or swapping the rock for something else. What I sought on the Camino was to embark on an adventure while my body still allowed it, and that meant embracing truth. Muscular dystrophy will be a part of me for the rest of my life. When I put my rock down, it was not to let go of a burden, but to swap it for truth.” 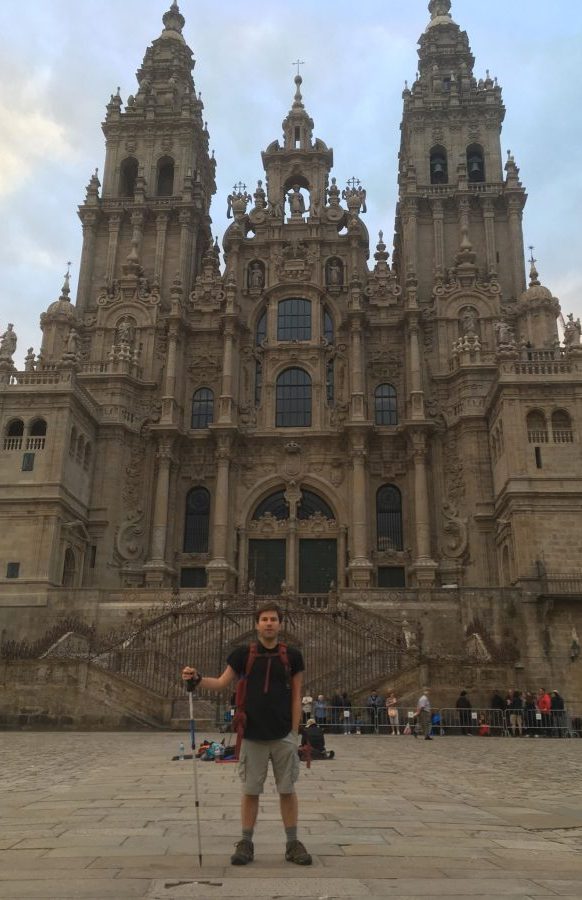 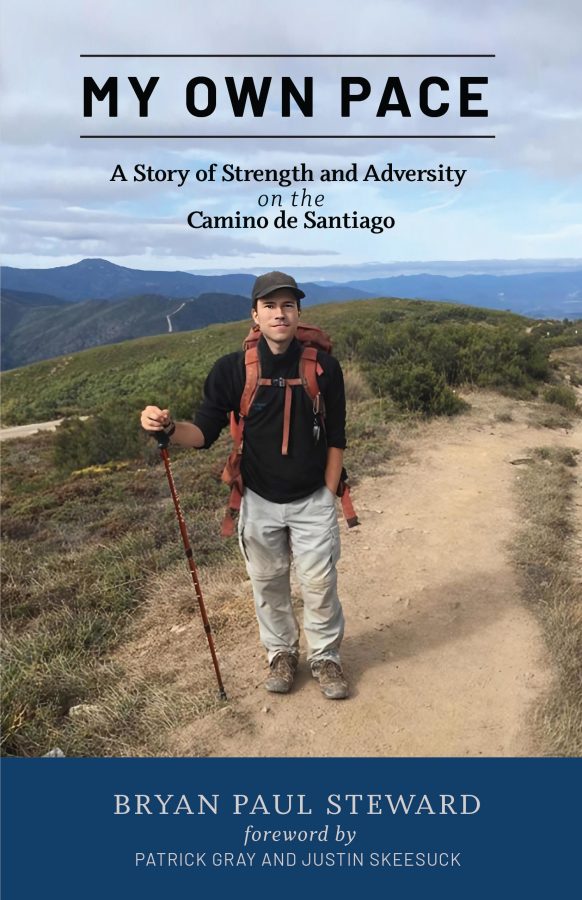 Bryan believes that “most people have it in them to do the Camino” and left me with this interesting memory that he believes represents what the Camino is all about. I’m inclined to agree:

“One story from the Camino I always like to share is the time I broke my hiking pole during one of my many falls. I was walking with an American husband and wife at the time and they offered me one of theirs because they thought I needed it more. I left my old broken pole on the side of the trail.

“I was grateful for their generosity, but what makes the incident interesting is that the next day I came across an injured pilgrim who needed a second pole. He had found my old pole, fixed it, and was using it. I was able to indirectly help someone else. I think that represents what the Camino is all about. Everything always works out and sometimes things seem to almost happen for a reason.”

To read more about Bryan’s story, make sure to pick up a copy of his book, which you can buy here.

Bryan walked the Camino Frances. For more information about the Camino de Santiago or to book your own trip, please don’t hesitate to contact us.

written by Sarah
Content Marketing Specialist Sarah hails from Ireland's Sunny South East. She has always had a passion for travel and has lived in Italy, Spain and South Korea, visiting new places whenever she can. New Zealand is currently top of her bucket list. Passionate about writing, Sarah has an MA in journalism and was named Best Breakout Irish Travel Writer at the 2018 Travel Media Awards.
More by Sarah
Contact Us