*By Victor Frank Vere, from Canada, who travelled the Portuguese Way route of the Camino de Santiago from Tui with CaminoWays.com 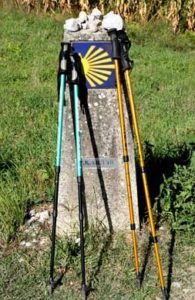 Dorothy was told to follow the yellow brick road in the film the Wizard of Oz if she wanted to locate the wizard and find her way back home.

Santiago de Compostela is the “City of An Apostle” where it is believed that the body of St. James was brought after he was beheaded by temple authorities in Palestine. It is around this tomb that the city of Santiago was built, with it’s magnificent cathedral standing as a beacon for countless pilgrims.

Hundreds of thousands of pilgrims have followed not the yellow brick road, but markers containing iconic yellow sea shells, and yellow arrows, in order to find a path to God.

Every once in a while the film industry produces a film that moves people to rethink their lives and do something. Such a film in this writer’s view was the Emilio Estevez film, starring Martin Sheen, entitled “The Way.”

I saw the film with a fellow colleague currently in our diocesan diaconal formation program, and a sometime writer for the Bread of Life, Roland Muzzatti, and suggested that we try the Camino.

We pondered, prayed, and finally decided to do it. We spent a year or so planning and building up sufficient stamina and physical acuity to give it a try.

We did not do the 800 km. trek from France to Northern Spain, but we did try the Portuguese route, flying to Porto, busing to Valenca and then cross over to Tuy Spain, and ending in Compostela. Our route took us through Tuy, O Porrino, Arcade, Pontevedra, Caldas de Reis, Padron, and finally Santiago de Compostela.

Each person walks their own walk. It is a time of testing, drinking plenty of water, and walking. Through vineyards, over fields, city streets, industrial complexes, and mountain paths, but always with the objective of drawing closer to Santiago.

There were some days in spite of it being the month of October when temperatures reached the thirties. Each of us prayed in our own fashion, often in silence, but stopping from time to time to get our Camino passports stamped at an inn where we stopped to buy fruit and water. I found that a cold orange and hot bread the tastiest of items on days when thirst and perhaps a little hunger surfaced. Especially when the bread was sold from the back of a truck
in a Spanish vineyard somewhere between Padron and Santiago.

We encountered much hospitality at the hands of the northern Spanish in the Galicia. There are plenty of churches and sanctuaries in which to stop, cool off, have a drink of water, and say a short prayer.

The greatest pleasure of the walk were the many people we met from all parts of the world. On our particular pilgrimage we met people from Africa, New Zealand, a Buddhist monk from Stockholm, folks from Russia, Spain, Portugal, United States, Ireland, Costa Rica, and so on.

Often conversations turned towards the spiritual and in my discernment I saw that the vast majority were there because of a desire to get closer to the God principle in their particular lives. Many were young people, who were tired of their current life styles, seeing in Western affluence, values that were illusory and non enduring.

One young man was a German financial advisor in his early thirties who has walked three caminos. He commented that he woke up one morning to realize that it was indeed all vanity, the six in the morning to nine at night routine of long hours and greedy clients. He wanted something better. He planned after the completion of this Camino to return home, marry his girl friend, and seek a better life style that encompassed the whole person. Happiness in his words was more important than money.

There were moments when I thought I could not walk one step further. However my colleague Roland, was always at a critical cross road, to point the way without commenting on my slower pace. Together we persevered and completed the walk.

That last day we walked approximately twenty five kilometres, and the added run into the Cathedral probably added another two. We had been blessed with no rain which would have been treacherous on the mountain paths, very narrow at times, and loaded with cobblestones.

The two sets of poles featured in the attached photograph resting on a marker were our strength at times. The marker encouraging us to continue, and the poles helping to accomplish this.

For twenty and thirty year olds carrying a pack of 20 to 25 kilograms, plus water is difficult enough. For a seventy two year old like myself, it was a little more so.

The rain held off until the very end of our pilgrimage. We were to sleep that night in the monastery hotel of St. Pinario, across the square opposite the Cathedral. However we had to attend at the Compostela office, present our passports of pilgrimage demonstrating several stamps a day at various stopping places, declare our reason for pilgrimage, and then receive our Compostela.

The Compostela is a beautiful certificate in Latin, from the Arch Diocese of Santiago indicating that we have completed the St. James’ Way (Santiago.) It was an emotional moment, after which the Costa Rican (Tican) urged a good bath, good dinner, a few bottles of Spanish wine, and some sleep. On our route back to the monastery hotel, the heavens opened up and the rain fell in torrents. We saw the humour in this as well as the irony.

At the Pilgrim`s mass the next morning where people from all nations of the world gathered to share the Eucharist, I became acutely aware of our universality in Christ in our communal sharing of the “BREAD OF LIFE.” We recognized many of our pilgrim companions that we had crossed paths with at various times. Each had their own story to tell as we sat on the Cathedral`s stone steps after mass, planning our return home to various parts of the globe. Photographs were taken. E mail addresses exchanged, but more important was the realization that we had a common goal, and had walked the way with the hundreds of thousands of people in past ages. We also realized that we were a present link to those yet to come. That is a humbling feeling.

To walk the Camino is a humbling experience in itself. There were many moments when I thought I had bitten off more than I could chew in spite of vigorous preparation and training. But I trusted that since God permitted me to be there, He would help me accomplish this objective. He did so, and I thank Him.

The walk to Santiago de Compostela in Northern Spain, Galician region, is something that I will never forget. The shrine is one of the three major shrines of Christendom along with Rome and Jerusalem. I have had the good fortune to visit all three.

However to get to Santiago I had to work very hard.

We all walk the Way no matter who we are, or where we are, but always with the hope that it is His Way. I am grateful for this milestone in my life, and I hope that future generations will have the blessings and courage to embrace the challenge of the Camino.

As many Spanish people said in our travels, repeated by countless pilgrims as they passed us, may you have a “ Buen Camino”. To which I would reply, AMEN.