Find more information about the Camino. 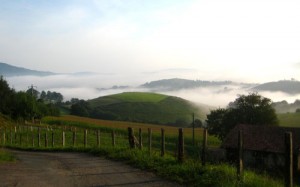 POINT Road resident and trainee priest Barry Matthews is going the distance for his faith.

That distance being all 500 miles of Camino de Santiago, the world famous pilgrimage through Northern Spain.

The 30 year old trainee priest has temporarily discarded the robes of the priesthood, in favour of a good pair of walking shoes, walking as he does an average of 30 km per day over a 33 day period.

“It’s quite gruelling but it is also great fun, and there is a great sense of team work and community among the group that I’m walking with,” Barry told the Democrat, having just finished his 30 odd kilometres for the day on Friday. “We are on a siesta at the moment.”

Everyday the hundreds of pilgrims and travellers make their way from one small town to the next along the 500 mile route.

Thousands of travellers complete the route each year, with people of all manner of faiths and background partaking.

“I’m doing the most popular Camino walking trail: Camino Frances. This part of the Camino de Santiago traditionally starts in St Jean Pied de Port in France and finishes in Santiago de Compostela about 780km later, after traveling the breadth of Northern Spain. It was the original route of St James who was evangelising following the death of Christ.

“We are start walking around 6am in the morning, and aim to be at our destination by lunchtime, though some days the route is longer and you can only make it back around 3pm.

“We are walking to Leon tommorrow. Each day you travel along, be it by yourself or with friends you have made. You can walk along the way and then meet up later in the day.

“When we arrive in a town, you generally find a local hostel. They are incredibly cheap, some just taking a small donation.”

“I’ve made many friends along the way. I’ve walked with a BBC journalist who is blogging about his experiences.

“Catholicism is still very strong here and the atmosphere in the rural villages and towns is very tranquil. You get plenty of time to reflect, which is very much part of it for me.”

When Barry returns he will be back in Maynooth to continue his studies.

“I’ve two weeks of walking until I get to Santiago. It’s been a wonderful experience so far. It’s a stunning country.”