As you walk the Camino de Santiago along one of its many routes, you are likely to encounter various legends, myths and interesting stories related to the places you are visiting on your journey. As well as meeting people and being in touch with nature, this is one of the greatest things about the Camino: the connection with the local culture and a chance to learn more about the past and heritage of the different regions on the Camino.

One of the many legends on the French Way is linked to the pretty XII century medieval bridge over the River Arga in Zubiri, Navarra, half way between Roncesvalles and Pamplona (Section 1 of the French Way). The name Zubiri (a tiny village of just over 400 people) means ‘village of the bridge’ in Basque language (Euskera). Zubiri’s bridge takes the name of ‘Puente de la Rabia’, which would translate as Rabies Bridge in English. 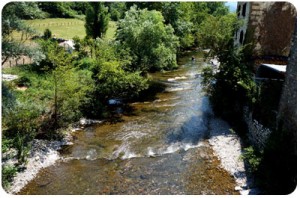 According to the legend, animals passing under the bridge’s arches would be miraculously healed of any illness (including rabies!) hence the bridge’s name. Other versions of the same legend attribute the bridge and in particular its central pillar the power of preventing animals from contracting rabies.

Today, the Arga river and Zubiri’s medieval bridge is a good stop to get refreshed after a hot Summer day along the Camino.