Planning a walking holiday in Tuscany on the Via Francigena? If you are travelling in July or August, you will have a chance to discover one of the oldest and most spectacular events of the year in Tuscany: the Siena Palio or Palio di Siena. Feel the strong tradition from the crowd, supporting their horse rider to bring honor and pride to their family. Lee Marshal from The Telegraph writes a great guide to this fantastic event:

The Siena Palio: how to see the race

Lee Marshall, our Tuscany expert, offers some advice on the famous horse race – how to book, where to stand, and where to stay

What is the Siena Palio?

Held in honour of the Virgin Mary, the race takes place twice a year. Ten of the city’s seventeen contrade, or districts, are represented by a horse and jockey in each race. The seven districts that didn’t race in the previous July or August contest compete by right, and are joined by horses from three lucky ‘repeat’ contrade, drawn by lot. 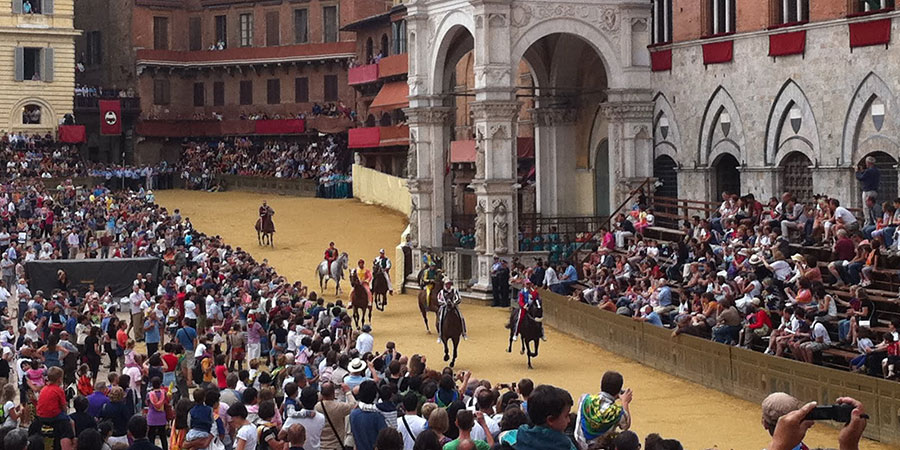 The race is no tourist-board invention, like some of Italy’s supposedly “Medieval” fairs, jousts and pageants: it has been held almost uninterruptedly in Siena’s civic hub, Piazza del Campo, since 1644 at least. And it’s certainly not staged for the benefit of visitors. In fact, the 40,000 Sienese who crowd into the Campo on race day (two-thirds of the city’s population) are largely oblivious to their 20,000 Italian and international guests. To gauge the strength of contrada loyalties, bear in mind that it is still common for ‘mixed-marriage’ couples to separate for the days leading up to and including the race if the contrada of the husband and wife both have a horse in contention.

When is the Siena Palio?

The Palio is helo twice a year on July 2 and August 16.  To absorb the charged atmosphere, it’s worth coming to Siena at least four days before the race itself. By this time, Piazza del Campo will already have been turned into a race-track, with workmen covering the course around the outside of the scallop-shaped piazza in yellow earth and staking out the central area which is the only free vantage point.

In the days leading up to the Palio, you can witness la tratta (the selection of the horses, around midday on June 29 and August 13), and the six horse trials that take place from the evening of la tratta day to the morning of Palio day. To watch these, make sure you’re in the cordoned-off area in the centre of the square by 8.40am for morning trials and 7.15pm for evening trials.

The other great Palio tradition are the festive open-air dinners each contrada holds on the evening before the race – on July 1 and August 15 – with trestle tables running the length of the district’s main street or filling up the main piazza. There are various Siena insiders who can get you into one of these (see below for a couple of recommendations), but an alternative is just to turn up a day or so before at the HQ of your chosen contrada and ask (addresses can be found at ilpalio.org). Typically, a dinner ticket costs around €50 a head.
To the despair of photographers, the race itself takes place just as the day’s light is fading, after a seemingly endless melée in which horses and riders jockey for position behind the canapa, or starter’s rope. It’s preceded by a two-hour-long procession in historical costume which evokes the glory days of the Sienese Republic in the thirteenth and fourteenth centuries, when it was the centre of the Italian banking system and had the same population as Paris.

How to visit the Palio?

There are three ways to see the race:

Whatever your vantage point, make sure you choose a contrada to root for – it makes the whole experience so much more fun. Once you’ve found one, and bought the appropriate scarf – readily available from souvenir stalls and shops – you’ll want to catch the priestly blessing of the horse and jockey in the official contrada church early in the afternoon of the Palio day (if the horse leaves a steaming visiting card on the church floor, it’s considered to be a good omen). And if your contrada wins, you can try crashing the victory dinner that evening. Your adoptive contradaioli are likely to be too happy, and too drunk, to resent the invasion.

*This article has been originally published by: http://www.telegraph.co.uk/travel/destinations/europe/italy/10718886/The-Siena-Palio-how-to-see-the-race.html

*Interested in seeing this fabulous traditional sporting event, talk to our Camino to Rome (Via Francigena trail) travel specialists.