Should only those following God embark on the Camino? 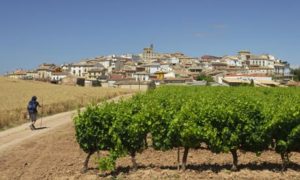 I am facing an atheist dilemma. How ethical is it to go on a pilgrimage when one doesn’t believe in God?

I first heard about the Camino de Santiago years ago, when a family friend attempted the 800-mile trek from Le Puy-en-Velay in France to Santiago de Compostela in Spain, in the middle of one our harshest winters. He walked through blizzards in the desolate plains of the Aubrac, crossed the snowy Pyrenees, and after months of perilous hiking, finally made his way to the holy city’s cathedral, where the remains of Saint James are supposedly buried. Not being religion-minded in the slightest, I did briefly admire his grit but didn’t pay his journey the attention it deserved. After all, why would someone put himself through such misery – the bitter cold sticking to your bones, the aching feet suffering through daily eight-hour ordeals, the less than luxurious shared accommodation along the way? He was probably, I thought, indulging a dark sadistic streak, maybe some kind of Jesus complex. I left it at that. 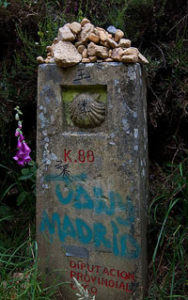 Fast forward to last summer. I listened to one of my favourite French radio programmes, in which the host interviews a range of guests about their greatest love story. In this episode, the interviewee recounted her pilgrimage – a three-month affair started in eastern France, all the way to Santiago. She had met her partner in a village bar along the way, and they decided to keep on walking together. The story, while being a blindingly obvious metaphor for life’s mysterious ways, was brilliant, and I found myself thinking about it often. A few months later, I stumbled upon the movie The Way, starring Martin Sheen. While it’s certainly not award-winning material, the landscapes, coupled with the gruelling hiking effort shown on screen, appealed to me. I started to think the Camino was something I wanted to attempt.

This is how I found myself visiting the Basilica of Saint Martin in Tours during a recent trip back home to France. Many roads lead to Santiago, and Tours is one stop among many. There, in preparation for my trip, I was able to buy my credencial – a piece of paper pilgrims present to every albergue (hostel) along the way, where it is duly stamped (think of it as a pilgrim’s passport). Upon reaching Santiago, the credencial is examined by the pilgrim’s office. If it looks kosher, the office issues the exhausted but jubilant pilgrim a compostela, proof of the journey’s completion.

This is where my ethical problem arises. While the Camino is frequented by people of all faiths and none, it is generally accepted that the credencial should be signed by a representative of the Catholic church – usually your local priest, who can send the pilgrim on her way, vouching for her character. But being not only an atheist, and one who is not even baptised, I don’t feel comfortable asking for a Catholic priest (in London, no less – which one would I even choose?) to sign my credencial. This would be a selfish and hypocritical gesture: should I be asking for someone’s blessing when I don’t share any of his religious tenets? Surely priests have better use of their time than setting up atheists’ bureaucratic paper trail.

This dilemma brought more questions to mind. If a fellow pilgrim starts a conversation, at which point should I divulge my lack of faith? And when I do, won’t it offend believers to share a holy trail with someone who doesn’t share their devotion?

Most pilgrims aren’t sure why they embark on the walk – from what I have read, both in memoirs and message boards, most just mention a nagging tug in their guts, telling them it’s time to go. I feel the same way. While I am under absolutely no illusion that I will “find myself” (bah!) or find God (pah!), the idea of travelling inwards while simultaneously conquering vast outside spaces intrigues me. But walking 200 miles (due to time constraints, I am only tackling a portion of the Camino) alone through south-west France to reach Spain is intimidating enough on its own – if I can do it without adding “multiple diplomatic incidents” to my list of casualties, all the better.