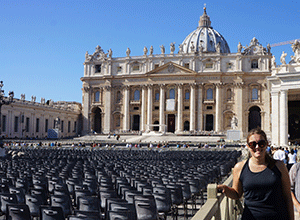 Sabela Via Francigena. Sabela from the CaminoWays.com Customer Care team cycled the last section of the Via Francigena, the Camino to Rome, recently. She shares her experience and tips:

When I was offered to travel the last 100 km of the Via Francigena, from Viterbo to Rome, I didn’t hesitate for a second; after a wonderful experience walking the Portuguese Way of the Camino de Santiago, this adventure seemed more than appealing, besides it would be my first time in Italy.

My ‘pre-adventure’ fears started to arise when I was informed about the itinerary: we would be cycling more than 100 km in just three days! I can´t deny it, such a challenge started to make me feel kind of nervous.

It was all bright and shinny when I landed in Rome with my travel companions, Adam and Jeremy. Specially shinny if we consider that we were coming from Dublin. After getting from the airport to Termini train station, and tasting our first Italian pizza nearby, we set on our way to our next destination and starting point of our cycling trip.

Viterbo turned out to be a charming fortified town, welcoming and very well preserved. After wandering around the old quarter and trying its delicious gastronomy, we decided to go to sleep quite early to gather strength, as a very long day was waiting for us.

The next morning we had a good breakfast, tried our bikes, and the route started. We cycled through flat paths during the first stretch, quite easy to follow. The sun was making the landscape even more stunning, full of olive groves, vineyards and hazelnut trees.

We arrived in Vetralla (end of the leg for those walking) before midday, and we stopped to have lunch on a picnic area. When we restarted our route, the terrain seemed to be more ‘difficult’, with stony paths and endless slopes. I felt I was slower, and pedalling was harder than early in the morning. Maybe that was my limit, after more than 20 km, maybe it was too warm or lunch was making me feel sluggish… but it wasn´t that! Suddenly, someone noticed that I had a puncture on my back tyre. 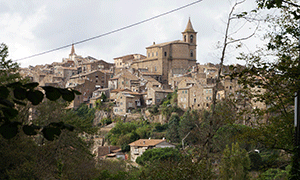 I thanked God for being with Jeremy and Adam, as I wouldn´t have a clue of what to do if I was alone. They discovered what the problem was very quickly, repaired it, and in less than 20 minutes we were back on track.

But anyway, the second section was more challenging: we went through a lush forest, where there was not even a path to cycle. The vegetation was very diverse, so dense that it was almost impossible to see the sky, nature in its pure state. For a few kilometres we had to get off our bikes.

Finally, after more than 40 km and an infinite slope, we arrived in Sutri. We had a quick look at the village, that has a big Roman amphitheatre, and we went to our guesthouse, the best of the trip. There we met our hostesses, an Italian Mamma and her daughter, that were taking care of the whole business. They were lovely and had a magical talent for cooking (those raviolis with spinach and parmiggiano cheese still make my mouth water!). That dinner was without a doubt the best prize after our effort.

The second day was supposed to be the most challenging one: more than 50 km through the mountains to arrive to our next destination. Climbing hills with a bike and struggling on the rocky down hills wasn´t my idea of fun, but it was amazing to stop pedalling on the plains when the terrain allowed me to do so, and just enjoy the scenery, while an imaginary soundtrack was played on my head.

In this region of Italy it is very usual to find the towns on the top of the mountain, that´s why arriving to each of the stops was a little bit of a ‘personal odyssey’ for me. I remember with affection (and I say ‘affection’ now that time distance allows me to do so) our arrival in Campagnano di Roma, where we stopped for lunch.

At first sight, it looked like an old ghost town, with ancient stone houses that seemed to be built up using the ruins of former structures, towers, churches… it was a curious place in all senses.

On the way we could also stop to explore the Regional Park Valle de Treja, popular because of its small waterfalls and the mills, and because it is the setting of one of Roberto Rosellini’s most known movies, Rome Open City. We also had time to stop for a gelatto in Fornello, just after cycling the last stretch of the day.

And finally, when we were about to stop feeling our exhausted legs, we arrived in Isola Farnese, where we spent the night and we got ready to arrive into the Eternal City. 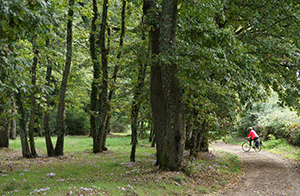 I would have liked to visit more in detail our last stop, but we were so tired that we could only walk to the restaurant that was booked for us and enjoy, again, the wonders of Italian cuisine.

The last cycling day, from Isola Farnese to Rome, is undoubtedly the poorer in terms of scenery: the immense green lands, the vegetation and peacefulness were replaced by roads and traffic. But a great reward was waiting for us (and my legs where really thankful for such a rest).

The most exciting part of the day was arriving in Montemario, a being able to contemplate our final destination from the height, remembering the stories of our adventure. I guess it was similar to the emotions felt by many pilgrims each year doing the Camino, when they arrive in Monte do Gozo on their way to Santiago.

And after midday, we arrived in Saint Peter Square, in the Vatican, and none of the three of us had ever been there before. What could I say about Rome… of course such an intense city would deserve one whole post; it would be impossible to describe it on the limited lines I have left.

This experience on the Via Francigena really exceeded all my expectations, that I have to say were very high from the beginning. Primarily because of the chance to discover remote villages, charming and genuine, that would be impossible to see on a common trip; and of course, because of the sense of accomplishment I felt when I arrived in Rome. However, don´t be mistaken, the trip involves a great effort (at least it did for myself), and the slopes, the heat and the stiff limbs sometimes can appear to be endless.

But I guess that´s the way life is, isn´t it? Grit your teeth when going uphill, and on each downhill just enjoy and let the wind caress your face.

Tips for your Via Francigena trip:

-If you take a train in Italy, do not forget to validate your ticket on the correct machine. Otherwise your distraction could result in a fine.

-Make sure at least one person on the group has some basic experience with bikes, otherwise one puncture could ruin your day!

For more information about the Via Francigena or to book your Camino to Rome holiday, contact our travel specialists.