By Rocco Rossi
Contributed to The Globe and Mail 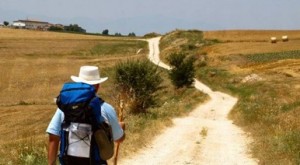 I have a confession to make: I am an addict.

I have spent thousands of dollars and months of my life over several years under the spell of my addiction. And I fully intend to give myself over to it yet again starting tomorrow.

My addiction is walking a thousand-year-old pilgrimage trail in northern Spain. For the sixth time in 11 years, I am returning to the Iberian Peninsula to walk El Camino de Santiago, or “The Way of St. James.”

Telling your family and friends, the first time, that you are heading out for a 900-kilometre walk with nothing but a backpack, long after your college days are over, generates more than a few raised eyebrows. You can imagine that multiple replays lead to talk of interventions.

“Why would you go back? Won’t it be boring and repetitive?” asked several of my friends the second, third, fourth and fifth times.

I find the questions amusing given that many of these same friends go back to the same cottage, the same golf course, the same holiday destination with largely the same people year after year without ever questioning.

You simply can’t walk the same Camino twice. I have gone at different times of the year and encountered different light, different weather, different flora and fauna. I stop in different towns, different hostels and always meet different people. But most significantly, I am different each time because I bring different experiences and different questions every time I come.

Over the last 1,000 years, millions of pilgrims have walked the Camino to the city in northwestern Spain, Santiago de Compostela, said to be home to the remains of St. James, an apostle of Christ. Many have done so for religious reasons –to atone for sins, give thanks for blessings received, ask for divine intervention or seek enlightenment. Others have done it to clear their heads, expose themselves to a new culture, lose weight or simply take a cheap vacation.

I have always gone to seek the peace and quiet that is so hard to find in the cacophony of daily life. The Camino has always delivered that and it has never failed to inspire, refresh and enlighten me.

This time, however, it is not about me. This time I am walking the Camino on behalf of Prostate Cancer Canada. Prostate cancer is the most common cancer affecting men, and 1 in 7 men will be diagnosed with it in his lifetime. Last year, over 26,000 Canadian men were diagnosed with the disease and over 4,000 died from it.

This pilgrimage is not about personal goals; rather, it is dedicated to raising funds and awareness to combat those numbers and to improve outcomes for all the men and their families facing this disease.

This time I’m not going alone, either. All of my prior pilgrimages have included collecting or being adopted by a Camino “family” of fellow pilgrims, but I have never begun the pilgrimage as part of a group before. Together, we are walking the final 250 km of the Camino from Astorga to Santiago de Compostela.

Each of us has committed to raise a minimum of $10,000, and each of us will be covering our own expenses so that 100 per cent of all funds raised will go to the charity. We have set a team goal of $150,000 and are rapidly closing in on that total, thanks to the generosity of sponsors such as Molycorp, and Davis and Henderson. If you too would like to support our team and become a virtual pilgrim yourself, you can make an online donation at www.prostatecancer.ca/roccorossi. Who knows, you might become an addict too.

Rocco Rossi is the CEO of Prostate Cancer Canada. He will be blogging as the Pilgrimage for Progress on Prostate Cancer proceeds and you can follow that blog at tgam.ca/giving.

*This article was originally published by The Globe and Mail on: