Reek Sunday is the main pilgrimage day to Croagh Patrick. Croagh Patrick is located on the western coast of Mayo on the southern shores of Clew Bay. Its pyramid-shaped summit is known locally as the “The Reek”, and the mountain has a long association with St Patrick. Pilgrimage can be undertaken at any time during the year but the main pilgrim days are the last Friday of July, last Sunday of July or Reek Sunday and the 15thof August. In the coming months I hope to expand on this post and explore the prehistoric, medieval, early modern and modern pilgrimages in much more detail. What follows is really just an overview of the history of the pilgrimage here.

The mountain has been a focus of pilgrimage from medieval if not pre-historic times and has an unbroken tradition for pilgrimage through the medieval period to the present. Little is known about the early medieval history of Croagh Patrick. By the seventh century the mountain was associated with St Patrick. The earliest written record of this association is the Brevarium by Tírechan which recalls that, during his mission in the west of Ireland, St Patrick (Mons Aigli) fasted there for forty days and nights on the summit of Croagh Patrick ( Bieler 2000, 153). Excavations carried out on the summit in 1994 revealed the presence of a small oratory on the summit dating to between between AD 430 and 890 built in the style of Gallarus oratory Dingle, Co. Kerry (Hughes 2005).

The earliest and most interesting reference to pilgrimage at the mountain comes from the annals for the year AD 1113 (AU). We are told

A ball of fire came on the night of the feast of Patrick 17 March on Cru chain Aighle, and destroyed thirty of those fasting (AU). 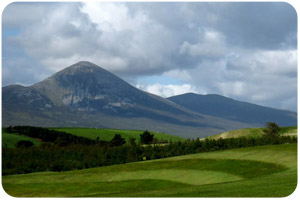 The pilgrims were fasting and performing a night vigil when this horrific event occured . Jocelyn’s twelfth century Life of St Patrick also records pilgrims fasting and performing a vigil ‘That many are accustomed to spend the night awake and fasting on the mount’ (Hughes 1991, 16). In 1432 Pope Eugene IV issued an indulgence of two years and two quarantines ‘of enjoined penance to penitents who visit and give alms for the repair of the below mentioned chapel’ on the summit of Croagh Patrick on the last Sunday of July (CPL). Croagh Patrick continued to attract pilgrims in the aftermath of the reformation and there are detailed ninteenth century accounts of the pilgrim rituals at the mountain. These rituals consisted of performing prayers known as stations, ritual prayers around devotional points in the landscape of the pilgrim site. The stations performed by modern pilgrims are very similar and the core traditions have not changed drastically, with the exception of the relaxing of some of the more penitential aspects of the prayer such as performing the entire pilgrimage barefoot or the stations on bare knees. Following the famine pilgrimage seems to have gone into decline but due to the efforts of the clergy it was revived, and a new church was built on the summit in 1905 (Hughes 2005, 15-22). The popularity of the pilgrimage has continued to grow and today pilgrim numbers on the main pilgrim day can reach tens of thousands.