Rituals and traditions established in medieval times by pilgrims to the shrine of St James in Santiago de Compostela continue to the present day.

The hordes of pilgrims who travelled the pilgrimage route called the Camino de Santiago (Way of St James) in medieval times, followed certain traditions and engaged in specific rituals that enhanced their religious experiences. Modern-day pilgrims observe these as well.

Rituals Before Leaving on the Compostela Pilgrimage

A pilgrimage was said to begin the moment a man crossed the threshold of his front door. He would have been granted permission to leave by his local religious authorities and sworn an oath to remain loyal to his monarch. Dressing in his pilgrim’s clothes, he attended mass, where his staff and scrip were blessed by the priest. Then he set off on his journey to the Shrine of St James, hundreds of miles away. It would be months before he returned to his home. 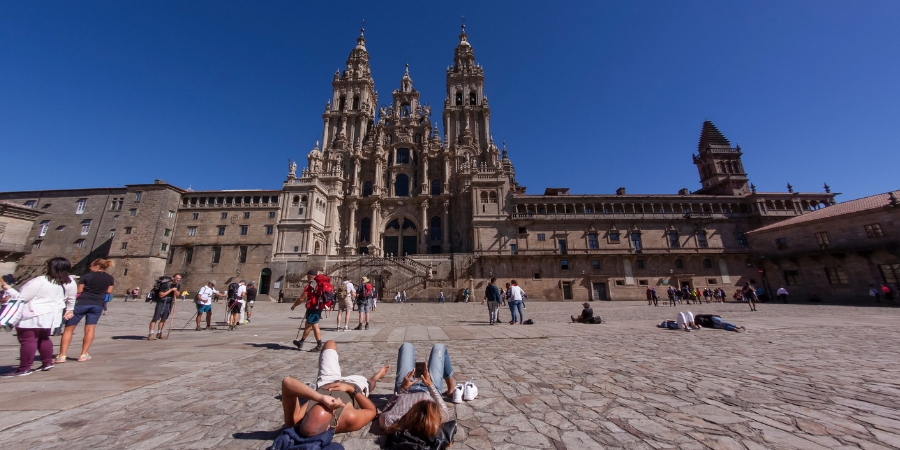 Traditions of the Camino de Santiago

Along the Camino de Santiago there were many churches where the pilgrims worshipped, praying to the particular saint associated with that chapel or to the Virgin. At Estella, they prayed to the Virgin of El Puy. At Leon Cathedral they rubbed their hands on the column bearing the statue of St James dressed in pilgrim garb.

For pilgrims treading the route across the Pyrenees, the monks at the monastery of San Salvador rang the chapel bell to guide the pilgrims across the mountains when the weather was bad.

At Triacastela, the earliest pilgrims were given a piece of limestone to carry to Castanola where a lime-making works was based. Lime from there was used in the building of the basilica at Santiago de Compostela.

Another tradition involving stones was for a pilgrim to add a rock to the cairns of stones dotted along the wayside. He believed that by placing a stone on the pile, he would be granted a wish.

On nearing the end of the Camino de Santiago, the pilgrims took part in a cleansing ritual. At Lavacolla (near Santiago de Compostela’s airport today) they bathed in the river before entering the city, washing away the dust and grime of their time on the road.

Close by was Mount Gozo. From the top of the mountain, the spires of the cathedral at Compostela could be seen. The pilgrims raced each other to the summit; whoever saw the towers first cried out, “Mon Joie!” He was considered ‘king’ of the group. Reaching this place was a very emotional experience for the pilgrims. Many fell to their knees in prayer; others burst into song. After weeks on the road, their goal was now in sight.

Pilgrim Rituals of Arrival at the Cathedral of Santiago de Compostela 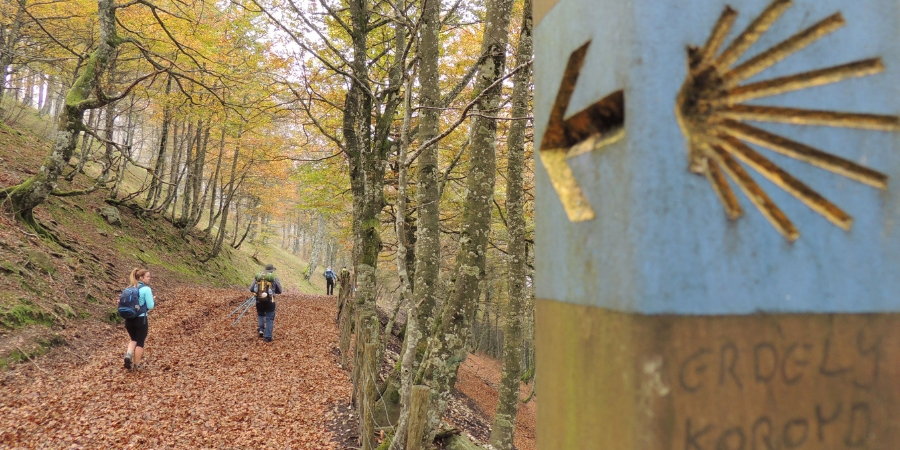 On entering the cathedral and the shrine of St James, the pilgrims first saw the Portico de la Gloria, the magnificently carved and sculpted gateway leading into the body of the building. Several rituals were performed by pilgrims in this area, rituals which continue in the present day.

The central pillar is known as the Tree of Jesse, topped with a seated figure of a benign St James, carrying a pilgrim’s staff and a scroll which reads “The Lord Sent Me”. Pilgrims over the last 1000 years have placed the fingers of their right hand into five indentations worn in the marble of this pillar, and said a silent prayer of thanks, or five Hail Marys for their safe arrival.

At the base of the Tree of Jesse are two crouching beasts with wide open mouths. Pilgrims knelt before them and thrust their arms, up to the elbows, in the gaping holes.

On the other side of the pillar, facing the High Altar, is a sculpture of a kneeling man. This is the curly-haired Maestro Mateo whose 12th century work of genius is the Portico de la Gloria. Ferdinand of Leon paid him a salary of two marks a week to design and carve over 185 different statues that make up the religious scenes of the gateway.

The statue of Maestro Mateo is also called ‘The Saint of the Bumps”. This nickname comes from the pilgrims’ ritual of kneeling down and tapping their foreheads three times against his, in the hope that some of his genius would be transferred to them.

Rituals at the Shrine of St James

From the Portico, the pilgrims made their way up the wide aisles of the cathedral to the High Altar, the shrine of St James. Seated on a gilded, highly ornamented dais, the statue of the Apostle is ablaze with jewels and gold. Pilgrims climbed up the short flight of steps behind the statue and embraced him, kissed his cape and touched their hats to his head.

From there, they descended to the crypt below the High Altar to view the casket reputed to contain the remains of the St James. On emerging from the depths, they might spend time visiting the chapels around the sides of the cathedral.

Then they went to confession and attended the Pilgrims’ Mass before being given their compostela certificates, the official paper that certified their completion of the pilgrimage.

Now they were able to buy a metal badge shaped like a scallop shell from dealers in the Square of the Silversmiths and walk the streets of Santiago de Compostela to find a hostel or inn where, on presentation of their compostela, they would be granted three nights free board and lodging.

Ten centuries on, the rituals and traditions of the Camino de Santiago continue. Modern-day pilgrims and visitors line up in the cathedral to place their right hands in the holes on the Tree of Jesse, bump heads with Maestro Mateo and hug the statue at the Shrine of St James.