Trip of a Lifetime on the Camino

A thousand years ago, pilgrims made their way on foot, on horses or donkeys along  El Camino de Santiago, the trip of a lifetime. The world has changed dramatically, but those still follow the Way of St. James.

Jerry Lomshek, Chicopee, and his son Jurij Lomshek have just returned home from their pilgrimage, which took them from Nice, France, to the Cathedral of Santiago de Compostela in northwestern Spain.

“The tomb of St. James the Apostle is in the cathedral there,” Jerry Lomshek said. “The tradition is that James came to that part of Spain to evangelize but did not meet with much success. He returned to Jerusalem, and Herod killed him. Two of his disciples brought his body back to Spain, and it was a pilgrimage spot by the ninth century.”

He said the pilgrims walk for various reasons, some simply enjoying the hike through the beautiful countryside.

“But in most of them, there is some kind of discernment along the way,” Lomshek said. “Everyone is sweaty and tired, and there’s no rich or poor. You’re all the same along the way.”

He said that he had read a lot about the Camino de Santiago and had always wanted to make a pilgrimage.

“I retired, but then our daughter went back to school, and I helped with the grandchildren,” Lomshek said. “She graduated, and I decided I would go before I got older. Jurij was going to quit his job here because he’s going to Seattle and getting married, so he decided to quit a little earlier and come with me.”

The two left on May 11, flew to Nice, France, rented a car, and drove to La Salette, the first of several Marian sites they visited during their trip. On Sept. 19, 1846, two local children told the story of seeing the Virgin Mary on Mount Sous-Les Basses.

“You don’t hear much about La Salette,” Lomshek said. “A lot of Europeans don’t even know about it.”

After a day at Avignon, they went on to Lourdes, a significant place of Roman Catholic pilgrimage and of miraculous healings. In 1858 a local girl, Bernadette Soubirous, 14, claimed that a beautiful lady appeared to her in the Grotto of Massabielle.

Several routes can be used to get to the Camino de Santiago, but the Lomsheks chose Route Frances, which begins at St. Jean Pied de Port.

There they picked up their credentials (pilgrims’ passports) required for staying in pilgrims’ hostels. 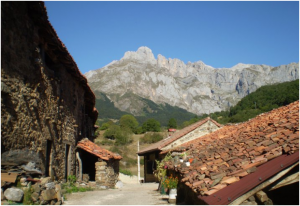 The first day of the walk, from St. Jean to Roncesvalles through the Pyrenees Mountains, is considered the most challenging day of the entire Camino.

His father said they walked through hills through much of the route, though the Meseta area was flat like western Kansas.

“It’s not a holiday, not a walk in the park,” Lomshek said.

His son said that there were two or three days when the temperature hit 1000 degrees, It also rained the first three days, and on the second day, the two had reached the top of a mountain peak when a storm struck with lightning and hail.

“I thought we all had some serious sins,” the younger man said.

“There were no trees or any place to take shelter, so we just had to keep walking,” his father added.

He said the route was well-marked with yellow arrows or signs bearing the image of a scallop shell, the traditional symbol of St. James.

“Every one of the pilgrims has a scallop shell that they wear on their backpack,” Lomshek said. “Everybody knows you’re a pilgrim.”

Pilgrims are entitled to stay at unique hostels that cost around five to 10 Euros a night, and many restaurants and cafes offer them specially priced meals.

“You can do the Camino for 25 Euros daily,” Lomshek said.

The walk can be too much for some pilgrims.

“We heard about at least 15 deaths along the route,” Jurij Lomshek said.

One of them was a man from Michigan they had gotten to know.

“He was 52, and he’d been a welder, then gone back to school and gotten a degree in social work,” Lomshek said. “He was trying to decide whether to go to work or for a master’s degree. Another time we were told that a man had died at a hostel 15 minutes before we got there.”

Then there was Dick, 79, the oldest walker the Lomsheks met.

“He was also the fastest walker, and we couldn’t keep up with him,” Lomshek said. “Then he pulled a leg muscle and thought he’d have to quit the Camino.  Three days later, we saw him coming up the route. He’d called his wife, and she told him to get going, so he did, and he made it to Santiago.”

It took the Lomsheks  33 days to get to the cathedral, where a Mass is celebrated at noon every day for the pilgrims who come in that day. Certificates are presented to the pilgrims who can prove that they have correctly travelled the Camino through stamps on their passports. 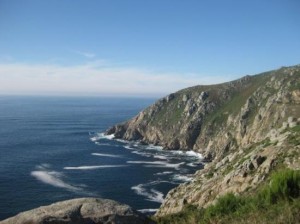 But that wasn’t quite the end. The Lomsheks walked for another three days on the Camino Finisterre, which ends in the most western point in Europe.

But they took their time doing it. After the Camino, the Lomsheks took a bus to Fatima in Portugal. In 1917, starting on May 13, the Virgin Mary reportedly appeared on the 13th day of six consecutive months to three shepherd children. They went to Lisbon, then flew to Venice and drove to Slovenia.

“Our son Janez,  his wife Ali and their three children met us in Slovenia, and we spent two weeks visiting family,” Lomshek said. “We got back July 17.”

Melissa Cheung, Jurij Lomshek’s fiancee, also spent a week with them. The couple will be getting married on July 28 in Seattle.

“Dad and I joked that the pilgrimage was our bachelor party,” Jurij Lomshek said.

“It was a life experience to do it,” his father said. “I’d encourage anybody to do the Camino. It’s a break, a time for reflection.”

Find more information about the Camino.