An inspirational Camino story written by Kendra Hartmann for the San Diego Community News Group, ‘Finding a life of service on the path to spirituality’ original article. 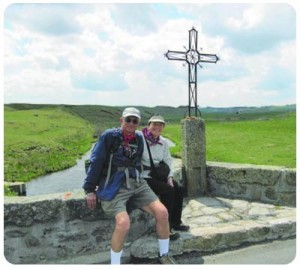 More than a dozen years ago, Bonnie Arora read a travel article in the Union-Tribune about pilgrimages — journeys undertaken by followers of nearly every spiritual doctrine in search of religious significance. The article stuck with her, especially the part that mentioned the Camino de Santiago, a network of pilgrimage trails dating back to the Middle Ages that cut through Europe, all leading to Santiago de Compostela in northwest Spain.

Arora and husband Krishna decided that when they retired, they would attempt a pilgrimage of their own as a way to discover their spiritual and ancestral routes. The La Jolla Golden Triangle Rotarians made a pact to take a Catholic pilgrimage — a nod to Bonnie’s Spanish roots — and a Hindu pilgrimage, in honor of Krishna’s Indian ancestry.

So in 2002, just a few years free from the workforce, they traveled to Spain to attempt 125 miles of the Camino de Santiago. Unsure how they would fare on such an undertaking — “We’ve always enjoyed taking morning walks before work, but we actually never considered ourselves hikers,” Bonnie said — they decided to play it safe and join a tour group with van support and pre-arranged nightly accommodations. The experience was challenging — with blisters, aches and pains to prove it — but it gave them a taste for the trail that, more than a decade later, they still haven’t had enough of.

Bonnie and Krishna returned in 2005 to complete the entire 500-mile Spanish portion of the trail, and again in 2008 to repeat the last 100 miles (making good on a promise they had made to God that if their son, a doctor in the Army, returned safely from his deployment in Afghanistan, they would walk the final segment).

In 2011, still thirsting for more adventures on the Camino, they discovered an additional 500-mile segment leading from Southern France and across the Pyrenees to Roncesvalles, Spain, the starting point of the Spanish Camino and the point where their journey began in 2002. They completed the first three segments of that section in 2011, then trekked another 162 miles of it in 2012. When they return on April 20, they will walk the final 175 miles, closing the gap between their Spanish and French pilgrimages and bringing the total miles trekked on the trail to 1,000.

As they finalized their plans to return for the final stretch, Krishna had the idea to dedicate the remaining segment of their journey to the La Jolla Golden Triangle Rotary — a club that has, like the Camino, come to mean so much to them over the years.

“It’s been an emotional thing for us. We’ve been traveling this route for the last 10 years,” Bonnie said. “Krishna suggested we do a fundraiser for our [Rotary] club, dedicating these last miles to the service projects they work on.”

The fundraising, though it started slow, has picked up recently with vigor. Donors can make pledges based on the number of miles or days walked, or can donate a flat amount. The Aroras initially set a goal of raising $25,000 for the club — an amount they thought was likely much too high.

At this writing, however, donations were nearing $23,000 and climbing, with 100 percent of the proceeds going to service projects with diverse missions ranging from building a new wing in a local veteran’s hospital to water sanitation projects in developing countries to literacy projects worldwide.

While some find spiritual awakening on the Camino, Bonnie said she and Krishna have experienced a complete shift in their lifelong goals and perspectives.

Since their first steps on the Camino, the Aroras have stumbled upon several ways to dedicate their lives to service. Two separate trips to India — completing the Hindu pilgrimage they promised themselves when they retired — resulted in involvement with some NGOs there. A hiking trip to Peru and Machu Picchu led them to the isolated Q’eros community and several projects, including the installation of a solar panel on a school — providing the only electricity in the community — and the construction of a footbridge (they even have a godson in the community now).

“When we retired we had no clue this is what we would become,” Krishna said. “Even at retirement, life continues to evolve. We still don’t know where we’re headed.”

One thing is certain: whatever path their life takes, it all leads back to the Camino.

“The beauty of the Camino is that it has many things to offer to everybody,” Krishna said. “If you’re a hiker, you can get your kicks getting from point A to point B. If you’re more into its spiritual aspects, you can take your time and enjoy every moment. You can look at sites where miracles have taken place. It has a different meaning to everybody.”

Readers can follow the Arora’s “Journey of 1,000 Miles” on their blog, which they will try to keep updated during their trek, at kandbscamino.blogspot.com. For more information about the La Jolla Golden Triangle Rotary, visit www.lajollagtrotary.org.