This week we talk to Ferrol native Andrea about what makes her home one of the most special Camino towns. Andrea was born in Ferrol on the Camino Ingles but moved to the South of Spain a few years later. Her time in her formative years was divided between North and South but in the identity battle over Galicia versus the sunny South, for Andrea, Galicia always wins. Between stints of living in Poland and Croatia, she now lives here in Dublin where we are delighted to have her insider knowledge of the region she knows and loves so well.

Ferrol which is now one of the most i 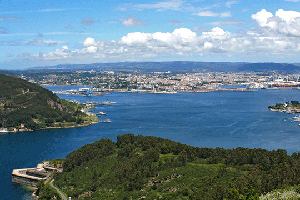 mportant shipyards in Europe started life as a small fishing village. Its strategic location at the end of an estuary led it to grow into the city that it is today. There are some boat tours available to explore the estuary and two of the castles which lie on either side. These castles of La Palma and San Felipe were originally used to protect the city from invaders. San Felipe is currently open to the public for visits. If you don’t fancy a boat ride, you can take the bus no. 35 and it will take you to the town which is right next to the entrance of the castle.

The port city is also home to a section of the Army, including the Navy. From Ferrol, you can visit one of the best Naval Museums in the area. In the rest of the old city, you will find several parks and I would recommend you to go for walk from the Port to the beautiful promenade which lays at the end of the estuary, Plaza de Amboage, Capitania Gardens, and Reina Sofia Park. From here you can gain splendid views of the Atlantic Coast. 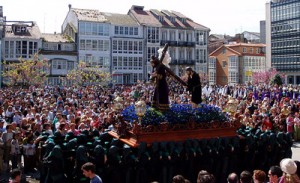 There is a lot to discover in this little city, its long beaches, in particular, are a sensual feast, at just twenty min away from the city. The perfect place to escape. You can access these beaches by bus number 31 and 33. Once you have had a look at all of those beautiful places, you might like to get some tapas in Rua da Magdalena between the City Hall and Canton de Molins.

The Camino Ingles is the Camino de Santiago route that was traditionally followed by pilgrims from Britain and Ireland. Easter would be the perfect time of the year to start the English Camino in Ferrol home to some of the most elaborate Easter processions in all of Spain. During the processions, members of religious brotherhoods walk the streets dressed in colourful penitential robes. They may be seen carrying processional candles, wooden crosses, or even walking the streets barefoot. From here you can walk to Santiago de Compostela for more Easter celebrations will take place.

For more information about the Camino de Santiago routes or to request a quote, contact our travel specialists.